Do you practice witchcraft, but yearn for a spiritual community that accepts your practice?  Maybe you like the idea of going to church, but don’t want to lie or pretend to believe something you don’t?  Unitarian Universalism promises a unique worship experience that welcomes people of different faiths without requiring them to convert or even believe in god.

What is Unitarian Universalism?

Unitarian Universalism is a non-doctrine religion based in what the church terms a “free and responsible search for truth and meaning.”

Congregants share a respect for human dignity, knowledge and an individualized approach to spiritual development.

Their approach is a broad, inclusive, interfaith path that recognizes the value of the inherent spiritual truth in all believe systems.

Christians do mill among UU congregations.  But so do people who practice Buddhism, Hinduism, Judiasm, Islam and just about every other major religion around the world.

They also include atheists, humanists and agnostics.

In most Unitarian Universalist churches, no one is required to believe in a specific deity or even believe in a deity at all.  Some do, some don’t.  Period.

Why I decided to explore the Unitarian Universalist experience.

I just moved to a brand new part of the country.

It’s really hard to find a coven that’s not either already established/not accepting new members, or off the grid completely.

Still, I really wanted a spiritual community to call home.

So far, I’ve explored the Hindu temples, and plan to look into the Buddhist ones as well.

But nothing quite appealed to me like the idea of going somewhere with people who are fine with my spiritual practice as it is, even though it isn’t theirs.

So I took the plunge, and for the first time in my life, I go to church every Sunday.

It’s super weird to actually put that in writing.  I never thought I would be a church person.  But here I am!

I’m not making any promises, and I’m not sure how long it will last.  But for now, I plan to keep going.

So far, it’s a mixed bag with mostly good apples.

Here’s a breakdown of what I like, and an honest account of the bit that I’m not so crazy about . . .

From my perspective, I like the following things about my experience with Unitarian Universalism:

A congregation that welcomes open pagans.

If you decide to attend regularly, or become a member, you are not expected to leave behind your practice, and no one will pressure you to convert to Christianity or any other faith.

Even though I’ve been out of the broom closet for years, it was the first time I felt comfortably in a church answering honestly when someone asked about my spiritual background.  No one even winced.

I find this very refreshing.

Sermons that draw on eclectic sources.

So far, I’ve been to about a dozen UU services at two different churches.

The ministers read from Buddhist scripture, the Koran, the Bible, the Bhagavad Gita, the poetry of Rumi, Bob Dylan lyrics and (to my delight!) Starhawk.

For me, this transforms the service into some combination of an uplifting spiritual experience and a cultural lesson.

I’ve learned a lot about different religions and perspectives during my time at Unitarian Universalist services, and I always walk out their doors feeling a little more enlightened.

The number one thing I like most about Unitarian Universalism is the diversity of their congregations’ and the many spiritual backgrounds I found among them.

It’s not uncommon to find a practicing Buddhist, neopagan or Christian at any given Sunday service.

I really felt in my element among so many people with differing spiritual views.  It’s both fascinating and humbling.

Emphasis on service to the community.

One of the reasons I wanted to start attending a church came down to volunteer work and opportunities to be of service to the community.

You can wear almost anything you want to a Unitarian Universalist service.

Some people dress way down, and that’s fine for them.

But I miss the days when everyone dressed up for church, and I love that some people do dress up.  I’ve seen people wear pillbox hats, 3-piece suits, and freshly dyed purple hair.

I like not feeling ridiculous if I decide to wear pearls or heels.

What I’m Not So Crazy About

With any church or religious organization, you have to accept that some things will align with your personal outlook, and some won’t.

Most people don’t agree 100% with any one church’s philosophy, and for me, Unitarian Universalism is no different.

So it’s important to be up front and recognize where you diverge from church leadership.  For me, the less appealing parts are:

One of my pet peeves about more traditional churches is the tendency to emphasize (usually very conservative) political views, and I don’t necessarily think church is the place for those types of discussions.

To me, it’s just as unbecoming at a liberal church as it is in a conservative one.

It’s hard for me to imagine a very politically conservative person feeling comfortable at a UU service.  In that sense, Unitarian Universalism tends to be just as exclusive as their conservative counterparts.

Without getting into specifics, I actually support many UU positions on public policy.

But my preference is to leave politics out of sacred space.

And if you’re going to insist on them in a country so politically divisive, at least welcome more than one viewpoint, instead of creating yet another echo chamber where people only talk and mingle with those in agreement.

Unitarian Universalism offers a great opportunity to experience a church community without having to hide your practice in witchcraft or any other faith.

If you’d like to find a congregation near you, check out this link. 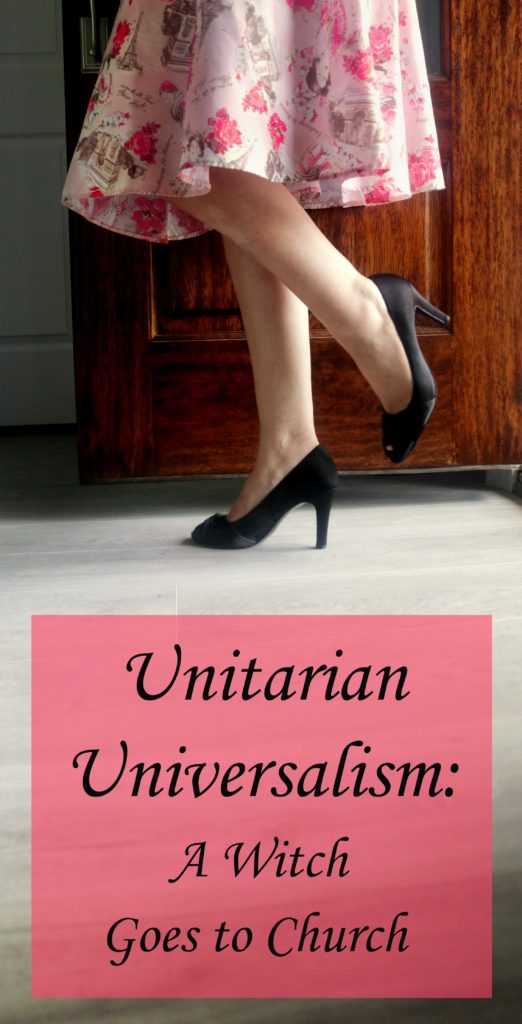