What witch doesn’t love the Wizard of Oz?  These upside down witch cupcakes are an homage to the pop cultural icons that made witches famous.

It’s a craft for people who aren’t crafty.  Trust me, anyone can do this!

Perfect for a Samhain or Halloween party, or to bring to the office during the Samhain season. 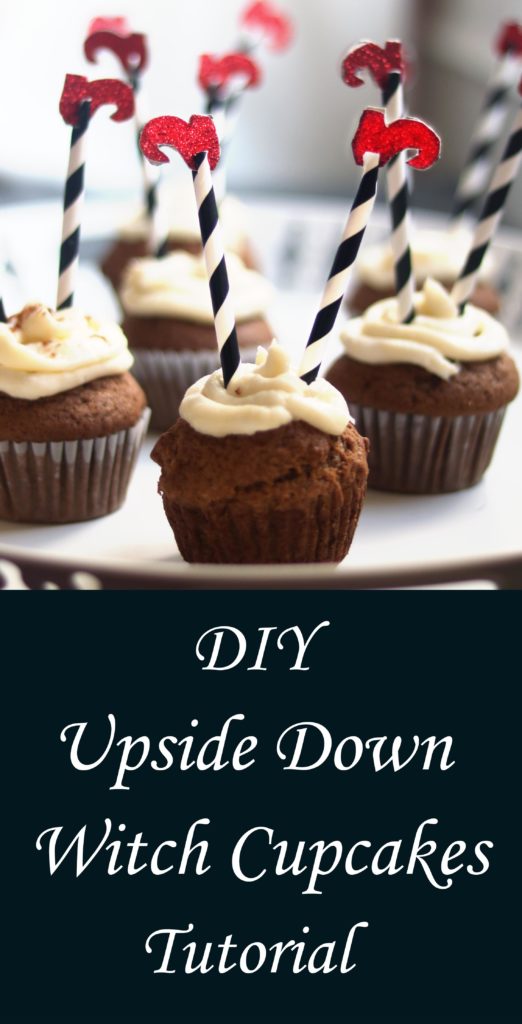 Choosing a Recipe for Your Witch Cupcakes

This idea works with any cupcake recipe.  But I think they feel extra autumn-y if you choose a recipe with classic fall flavors.

I used my Harvest Moon Esbat cupcake recipe, except I made them full-sized cupcakes instead of mini.

I’ve seen variations on this idea before, but I’ve never seen anyone do it with ruby red slippers.

That said, double-sided red glitter card stock is hard to find, so I had to cut out 4 of each boot for each cupcake (see Step 1).

If you want to make this project easier, you can try black or red construction paper, but I think the glitter gives it a little extra something that made it worth it for us.

(Please note:  This section contains affiliate links for your convenience.  It’s standard industry practice and it’s really no big deal, but the FTC got their panties in a wad about it a few years ago and now we all have to bore you with super bland disclaimers about it).

Trace and cut out the boots.  I used this downloadable pattern, but you can eyeball it and make your own pattern if you want.  I liked the look of the hooked boots, but they are a little hard to cut out.

I was unable to find double-sided red glitter card stock, so I ended up cutting out four boots for each cupcake and then gluing the two sides together.  If this sounds like too much work, you can also opt to make black boots or red boots out of construction paper to avoid having to cut out two sides.

Cut each straw in half.

Slide the shoes into the straws. 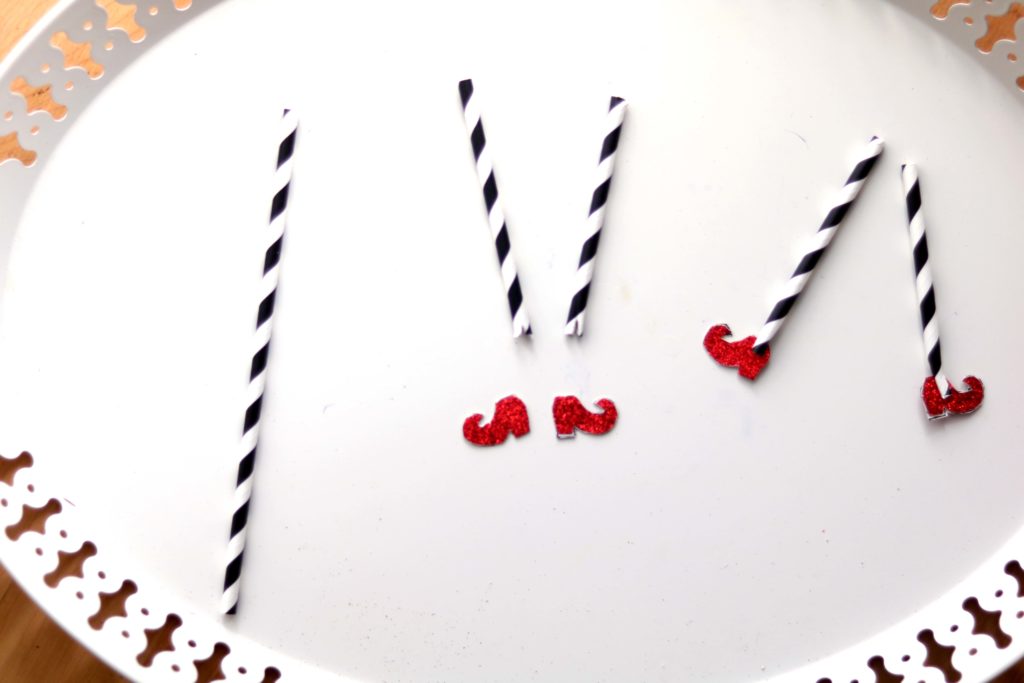 Gently insert the straws into each cupcake.  I liked the way the feet looked best when they were turned out (like 2nd position in ballet) or pointed in the same direction.  Play with the arrangement until it suits you.

-If you’re planning on traveling with these (to take them to work or a party), leave the straws out until you get there.  It’s much easy than trying to transport the cupcakes fully assembled.

-Consider enlarging the template slightly with your printer options (you can usually do this in the “Print Preview” box).  The smaller the boots, the harder they are to cut out, especially with the tight curve at the toe.

–Don’t try to put glitter cardstock through your printer.  It seems like a good idea, because it’s easier than tracing the pattern, but it won’t work out.   However, if you’re using regular construction paper, and you’ve run it through your printer before without a problem, it is much easier that way.

-Consider using a stiff frosting recipe, like this one for cream cheese frosting, and then piping the frosting on to give the cupcakes some depth.  It looks better when the legs have something to “sink into.”