Lindsey, a youthful woman with coiling dark hair, sits next to me on a tangerine-orange floor bed in the waning light.

I start to relax.  After over 400 miles of tree-lined highway and roadside diners, I’m just glad to be here.

Anyone who makes it here knows it’s a journey.

In the short drive from the neighboring town of Berea, I make three wrong turns and at least one phone call to the minister before I find it.

Set back from the steady pavement of a long, country road lined with collapsing barnyards and purple wildflowers, the Church of the Peaceful Mountain Way resides in nondescript building with gray vinyl siding.

Ayahuasca in the United States

Oklevueha Native American Church of the Peaceful Mountain Way operates one of a few churches across the country dedicated to using a hallucinogenic concoction called ayahuasca in the pursuit of spiritual enlightenment and healing.

Originally discovered by South American indigenous peoples of the Amazon, the botanical ingredients for ayahuasca are typically brewed into a tea.

Some people also say it brings them closer to god.

All over the world, combat veterans, opiod addicts, women suffering postpartum depression, and even cancer patients seek out ceremonies like the ones offered at Peaceful Mountain Way in hopes of finding answers.

Many swear it works.

The body of formal research into these claims remains limited.  But over the last several decades, academia continues to show an interest in ayahuasca’s potential for treating persistent conditions like addiction and depression.

For now, using ayahuasca in the US for retreats like this remains controversial.  Legal ramifications, social consequences and, in rare cases, even death make many people understandably wary.  Some also question the wisdom of removing ayahuasca from its cultural context.

Others say the emotional healing and spiritual enlightenment ayahuasca offers make it universally valuable to the human experience.

Either way, thousands of people decide try it every year.  Many say its mystical and psychological benefits are worth it.

But getting access to ayahuasca in the United States isn’t easy.

Churches like the Peaceful Mountain Way rely on federal law that, so far, appears to shelter them from the legal repercussions ordinarily consequential to the possession of the active ingredient in ayahuasca, known as DMT (or dimethyltryptamine). 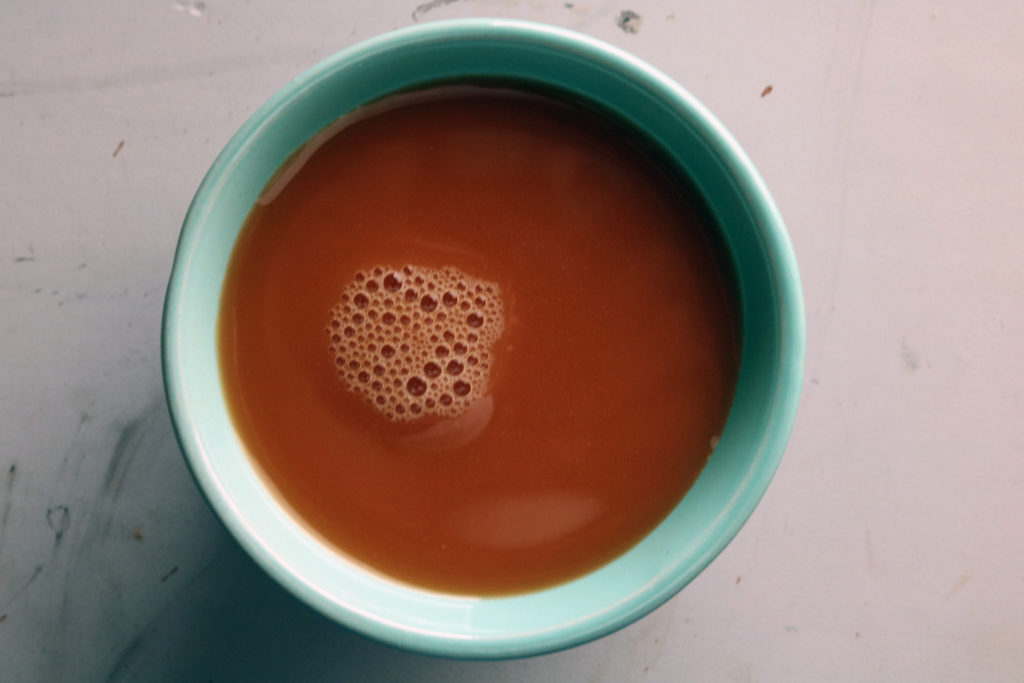 Ayahuasca culture continues to bear the mark of its history with paganism.

Even Icaro, the name for music used during ayahuasca ceremonies, originates in shamanic witchcraft.   Predictably, Wikipedia offers a simplified definition for this word.   It means, “Magic or alchemy, or any esoteric modality by which a practitioner attempts to channel their energy to manifest their will.”

The Amazonian tribes that discovered ayahuasca refer to as “Mother Ayahuasca.”    Its nickname implies a feminine divine recognizable to their neopagan counterparts elsewhere.

Practitioners of modern witchcraft also share a lot in common with ayahuasca practitioners in the United States.  Stigmatized and frequently misunderstood by mainstream thinking, the ritual ingestion of ayahuasca often operates behind closed doors and out of public view.

Chief Minister Damian Gover meets me in a remote parking lot adjacent to an abandoned pool grown wild with vines and crumbling concrete.

Atop a riding mower, the landlady of this property sits, taming nature in the great expanse of the acreage behind us.

Even she doesn’t know exactly what services here entail.

“She knows we’re a church, and we do spiritual things here.  But that’s it,”  Gover tells me later.

He opens the secretive door to the little gray church.

Gover leads me through a large room with acidic-bright colors and eclectic, psychoactive art from around the world. 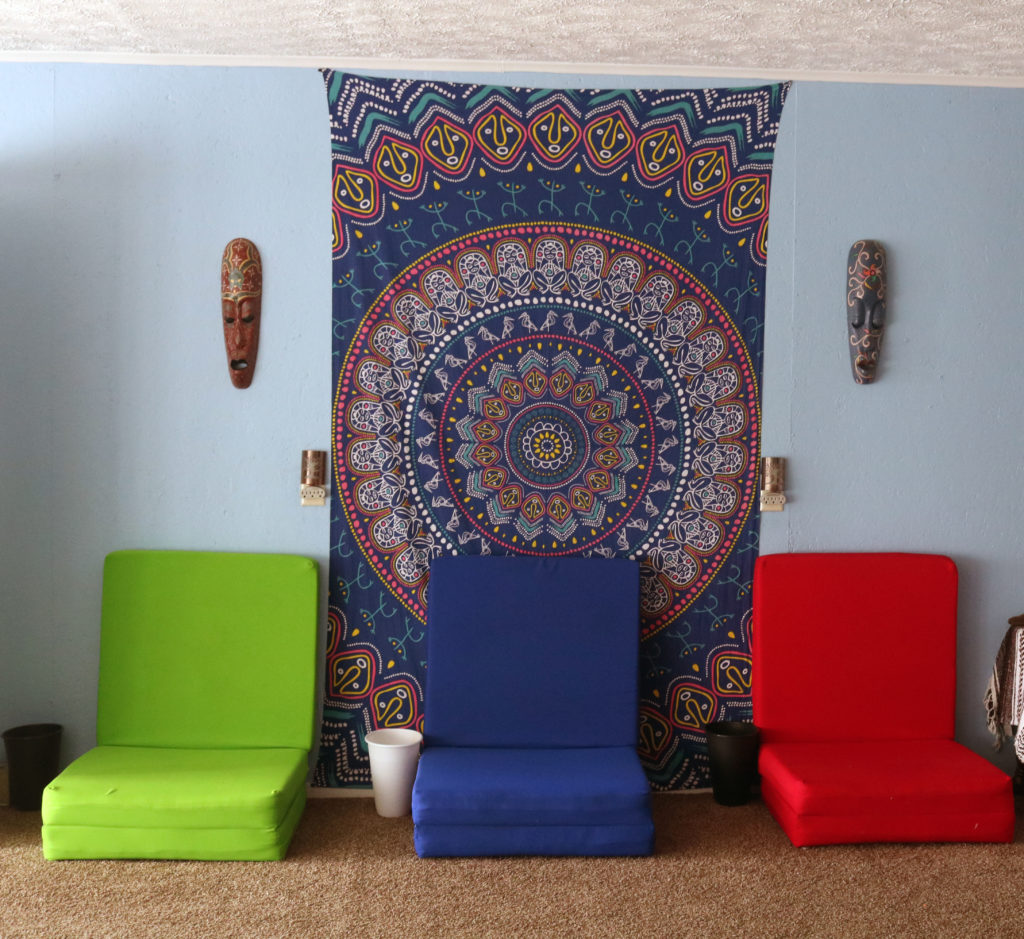 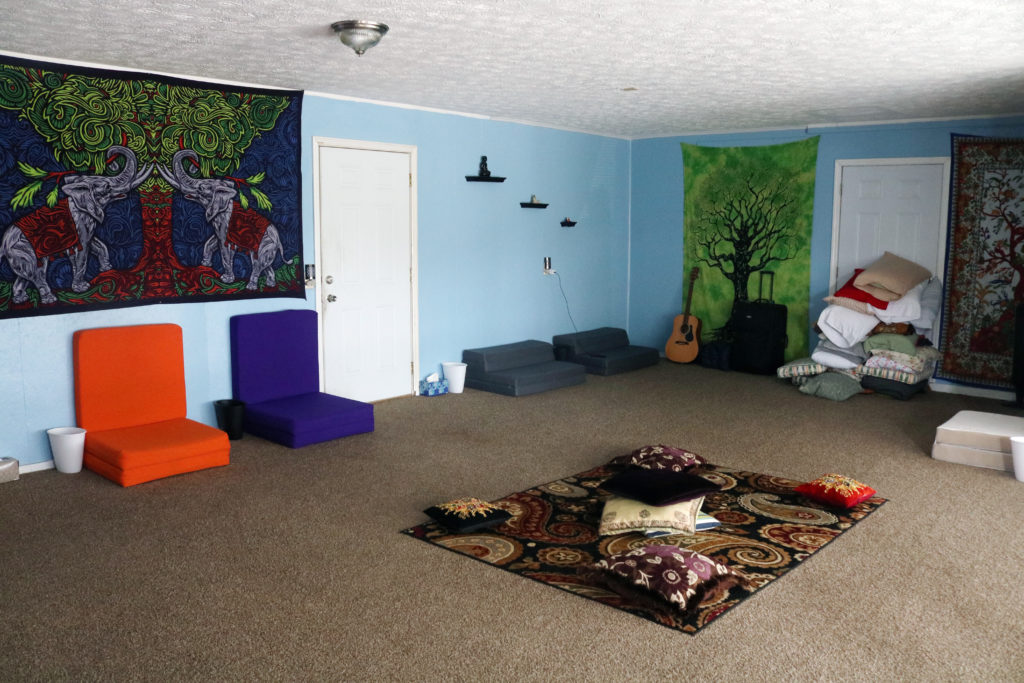 “People come to us . . . when all our traditional institutions have let them down.”

We settle into the kitchen to discuss Gover’s thoughts on religion, ministry and the psychedelic South American jungle vine that brought us here.

From our very first conversation, Gover emphasized to me the importance of not referring to him as a shaman.  When I ask him why he chooses to identify as a Minister instead, he replies simply:  “It’s more culturally appropriate.”

Gover admits he never apprenticed with an indigenous practitioner in the Amazon.  He relies on his training at a nearby (unaffiliated) ayahuasca church and his personal experience to provide spiritual counseling and assist his parishioners.

In many ways, Gover serves his congregation as any other Minister.  He offers spiritual counseling and performs marriage ceremonies.  Even his manner of dress reflects the modest simplicity that other American ministers often adopt.

But services in this church don’t involve Biblical recitation or hymnals.

Like a witch’s magic brew, two jugs of reddish brown liquid rest atop the table next to us.

“People come to us when all our traditional institutions—-doctors, psychologists, churches—have let them down,”  Gover tells me.

They seem to connect with him.

“I wouldn’t go anywhere else to do this,” Jennifer*, a second-time participant later tells me.  “I feel safe here.”

Others tell me that they appreciate the time Gover took to discuss their lives with them and their concerns before they came.

I ask Gover to tell me the hardest part of his experience with this work.

“Well, the death, of course.”  He refers to the 2016 death of Lindsay Poole at the church’s previous location in Berea, Kentucky.   “It was devastating.  I thought, ‘This is over.  We can’t do it anymore.'”

But Gover says the support from his community encouraged him to continue.

“It’s like the snake that wraps itself around your belly.”

I buried my grandfather next to his quiet, unassuming wife in a cemetery less than a dozen miles from here.

Thinking of him as the participants of this ayahuasca ceremony gather on the floor in a circle at the center of the room the next day, I wonder:

Is he watching?  Do the spirits gather just before you swing open the door to the Other Side?

It feels tribal.  Everyone is barefoot.

Yet no here conforms to my expectations of the loopy, crystal-laden, tie-dyed hippie.

If normal is a thing, then these people are normal.

Annie* works in the military.

I easily picture David sharing a craft beer with my husband over barbecue.

One man named Jay stands in utter defiance of my assumptions: a self-proclaimed Republican, proud Christian and an ex-trucker.

Each of them takes turns talking about why they chose to participate.

Their harrowing tales of survival are both deeply personal and yet, recognizably universal.

They describe personal losses, overcoming difficult family relationships and hopes for the future.

Everyone files into the kitchen solemnly.  Arranged carefully on a brightly colored tablecloth, a circle of ceramic cups awaits.   Each of the participants takes one.

They remind me vaguely of the woodland tea party in Alice in Wonderland.

The mysterious liquid inside resembles the color of lake water.

Some gaze hesitantly into the concoction.  Others knock it back immediately like taking a shot of rough liquor. 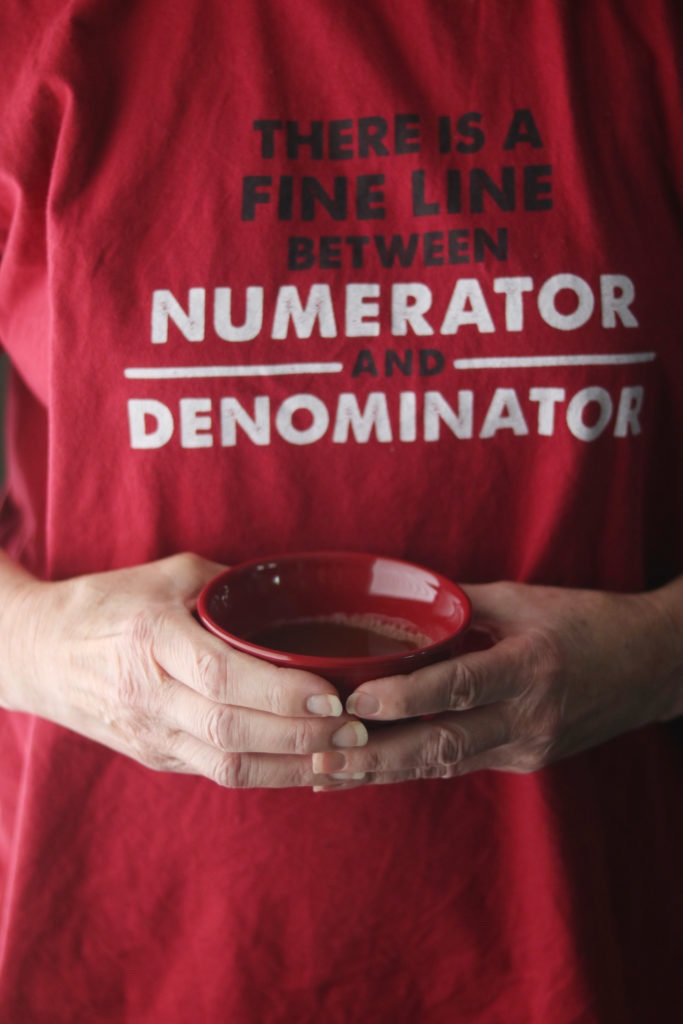 Of the seven participants this weekend, only two have taken ayahuasca before.   One of them, a woman with wild grey hair and eyes like a fortune teller, retreats immediately to her floor bed after ingesting the tea.  She reclines, closes her eyes, and remains there.

I wonder what she knows that everyone else doesn’t.

After about 30 minutes, the first of them begins to vomit into the discreetly placed plastic trash cans that reside next to each chair.  Those experienced with ayahuasca use call this stage “the purge.”  Some people believe that the associated vomiting and bowel evacuation cleanse both the spiritual and physical body.

Gover collects the buckets to rinse them out in the kitchen sink.  He swirls the contents of one, musing.  “This one’s chunky.”

In the adjacent room, participants enter various stages of delirium.  A mesmerized, candy-coated glaze in their eyes, some of them retire to their mats.

Others try, in halting, disjointed speech, to describe the experience to me.

Squinting into an unknowable distance as though reading cave paintings out loud before the advent of written language, they make sense only in the unconscious way that dreams do.

In a cryptic whisper, Eric’s words echo in my mind for days.  “It’s like the snake that wraps itself around your belly.”

Lindsey, another ayahuasca veteran, arrives late on the first night.

She tells me that this weekend makes six experiences with “the medicine” for her.  She even made the trip to an ayahuasca retreat in Costa Rica.

In the background, the strangely beautiful, otherworldly sound of icaro chants plays.

I walk outside with her to help her unload her car.  We discuss travel, and in particular, our mutual interest in Israel.  She mentions that she is “ethnically Jewish,” but:  “I never connected with the religious aspect of Judaism.”

Among the skills she acquired during her spiritual pursuits, Lindsey knows how to administer a sacred tobacco often used during ayahuasca ceremonies.

Later, I ask her what she would say to those who have misconceptions about retreats like this.  In particular, what would she say to people who think this is all just an excuse for recreational drug use?

“Ayahuasca is NOT {for] fun. Not something to be taken lightly.  It is medicine in every since [sic] of the word. I am always very careful to call it what it is, medicine.”

(Lindsey asked me later to amend her original statement to include the word “for” for clarification).

On Sunday morning, Gover and his assistant gather everyone for one last circle meeting.

Contrasting with the awkward introductions of two days before, the group now takes on a familial feeling.  They’ve done battle together.  Everyone came out alive.

Each of them describes transcendent mystical experiences.  They talk about entering alternate realities, other dimensions, and seeing themselves from infinite perspectives.

“It’s like having the code to the Matrix,” David says.

But not all of their journeys were frightless.  Some confronted terrifying, nightmarish inner thoughts and feelings.

Most of them describe even the worst of it as ultimately cleansing.

I asked Jay, the ex-trucker/Christian-Republican, if he knew any scripture that described his revelations from ayahuasca.  He paused.  With clear, kind, wise eyes, he quoted fluidly: “Psalm eighty-six ten:  ‘Be still, and know that I am God.'”

The choice to ingest a powerful psychedelic like ayahuasca is a serious one.  It’s not for everyone.

But just being surrounded by people who took ayahuasca had some strange by-proxy effects.  The intimacy of witnessing eight strangers navigate their most powerful inner demons and universal insights shook me.

Whatever that lightening-electric charge is in the air when a life transforms irrevocably, I sat steeping in it for two days.

I know it sounds a little nuts, but I felt like we were all one animal with one shared consciousness.  A near-psychic energy seemed to transmit between the participants, the clergy and even me.

The lengths to which humans go to commune with the divine continue fascinate me and inform my own journey.

From Celtic fertility rites to ritual exorcism, I’ve gone out of my way to witness some strange and powerful spiritual experiences.

But ayahuasca is its own animal—-wild and utterly untamable,

*Please note:  Due to the potential legal, social and professional ramifications, some names have been withheld or changed where noted. 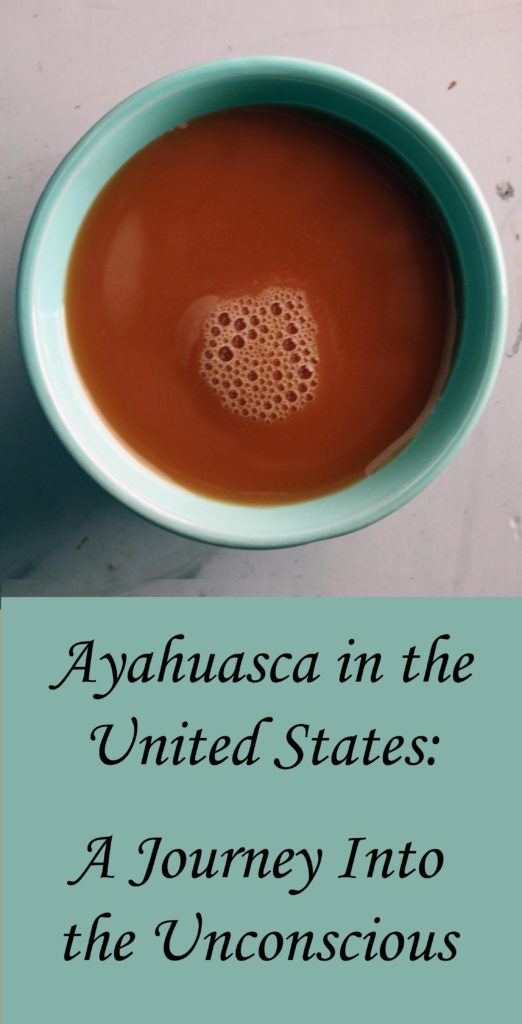