When Dorothy emerged stumbling and delirious from the poppy fields, I cannot imagine she found the Emerald City any greener than I found the misting, jade skyline of Edinburgh.

I came here to experience the famed pagan Beltane festival; I left with a new respect for Scotland’s history, heritage, and most of all, Her people. 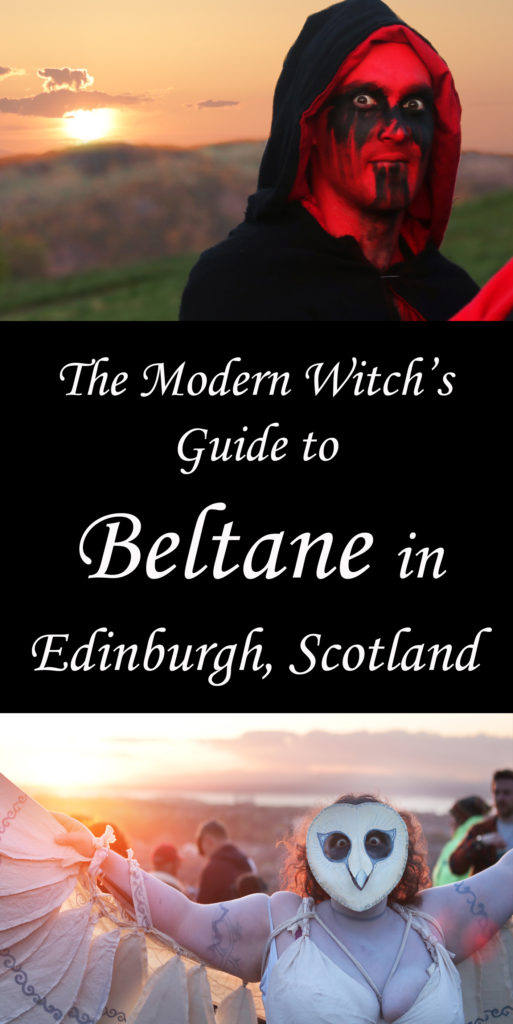 Noticeably absent from this weekend flight were the international businessmen, who usually stuff the upgraded classes, demanding liquor at 6 o’clock in the morning to celebrate the end of a workday in another time zone entirely. 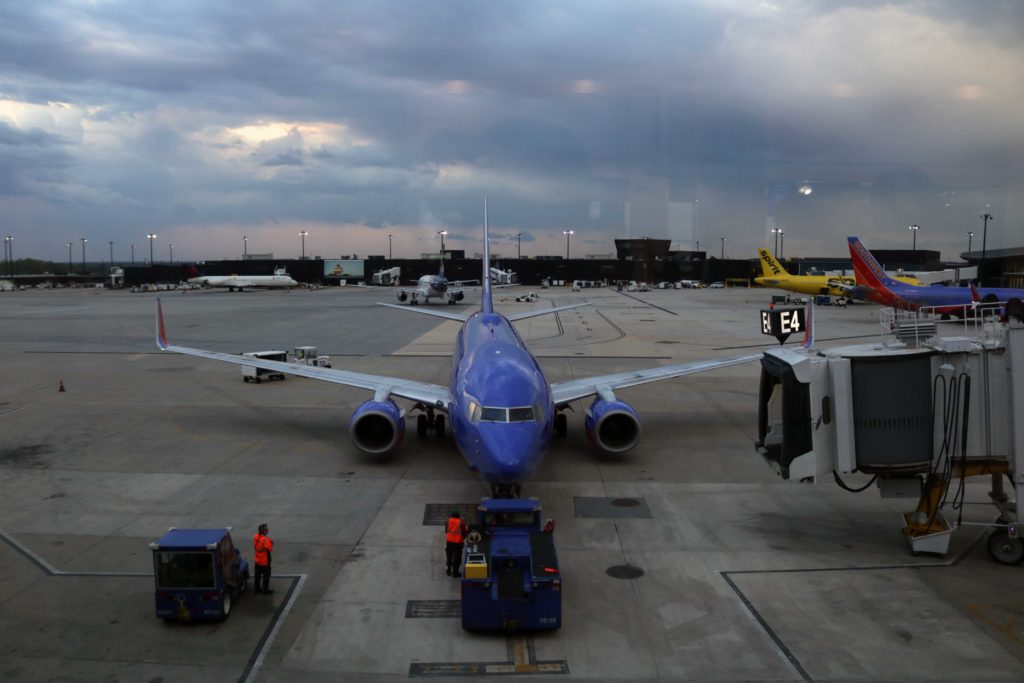 I connected through Reykjavik.

The geisha-like flight attendants on the Icelandic airline teetered down the aisles in sky-high heels and absurdly tight, royal-purple pencil skirts. Ornamental chiffon scarves tied securely to their delicate throats, fluttering about anxiously in their hurried wakes.

I listened to them chatter like shivering school girls in the late spring snow. Icelandic is a strange, beautiful, utterly opaque language grown wild from its Germanic roots.

A window seat: I let my eyes wander half-focused over the phantasmagorical majesty of the tumbling, rose-colored clouds as they enveloped with indifference this tiny, smoldering, war-scarred planet called “Earth.”

The view made me feel simultaneously powerless and omnipresent.

For the first time in any official capacity, when handed the customs form, I quite boldly declared myself a “writer” in the blank space demanding my occupation.

Here’s a hint: don’t EVER call yourself a “writer” on a customs form, which is only slightly less stupid than calling yourself a “journalist.”

Immigration Official: What brings you to Edinburgh?

Me: Only in theory.

Immigration Official: For whom do you write?

Immigration Official (rolls eyes): I see. What, exactly, do you write about?

Customs Official: Do you plan to write about your experiences here in Edinburgh?

Me: I plan to be drunk on the local whiskey for most of the experience. Does that sound work to you?

Customs Official: Let’s try this again, shall we? Do you earn an income from this blog?

Me: “Income” is a very generous word for it.

As always, I strongly suggest you avoid hotels, hostels and other traditional lodging options in favor of renting an actual local residence.

In this case, I was welcomed as guest by the lovely, gracious, extraordinarily helpful Annette, who owns  a flat on the West End, which is available for rent on Airbnb here. 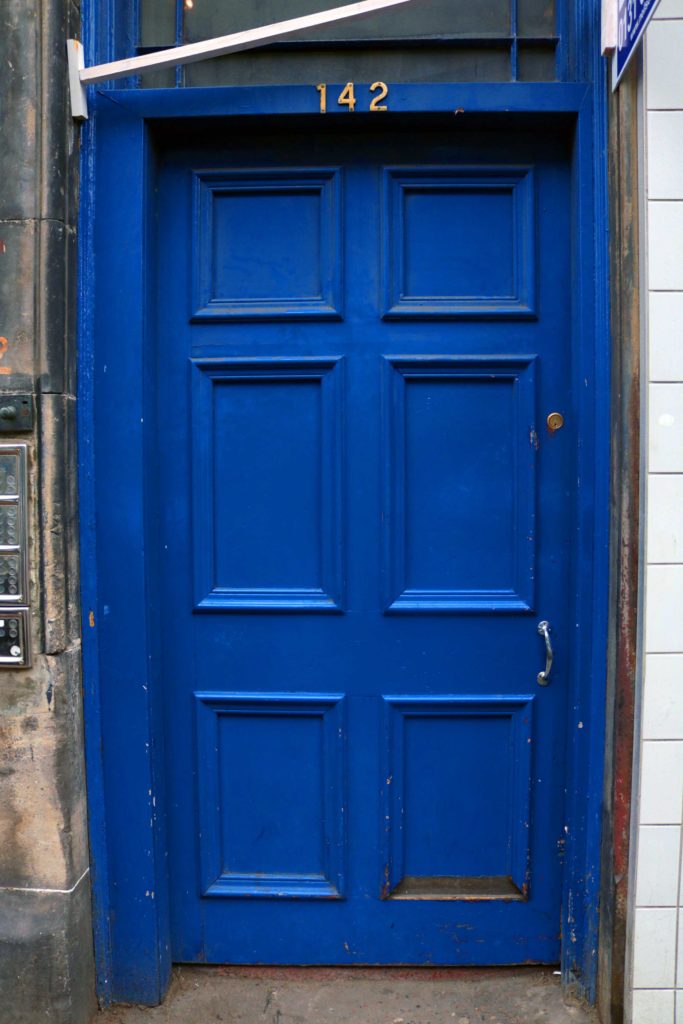 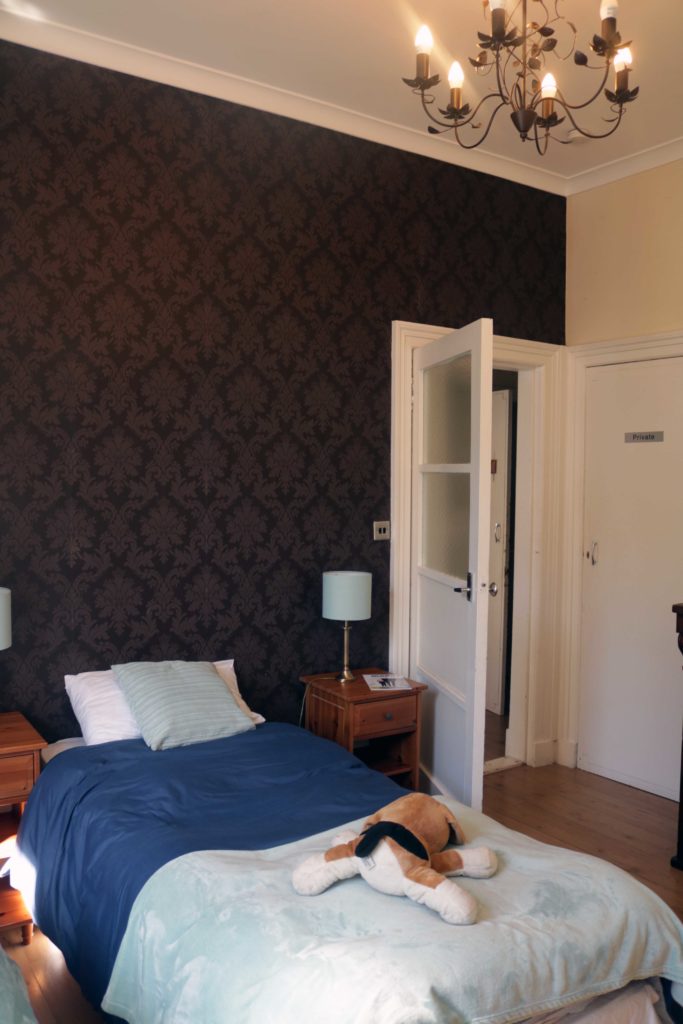 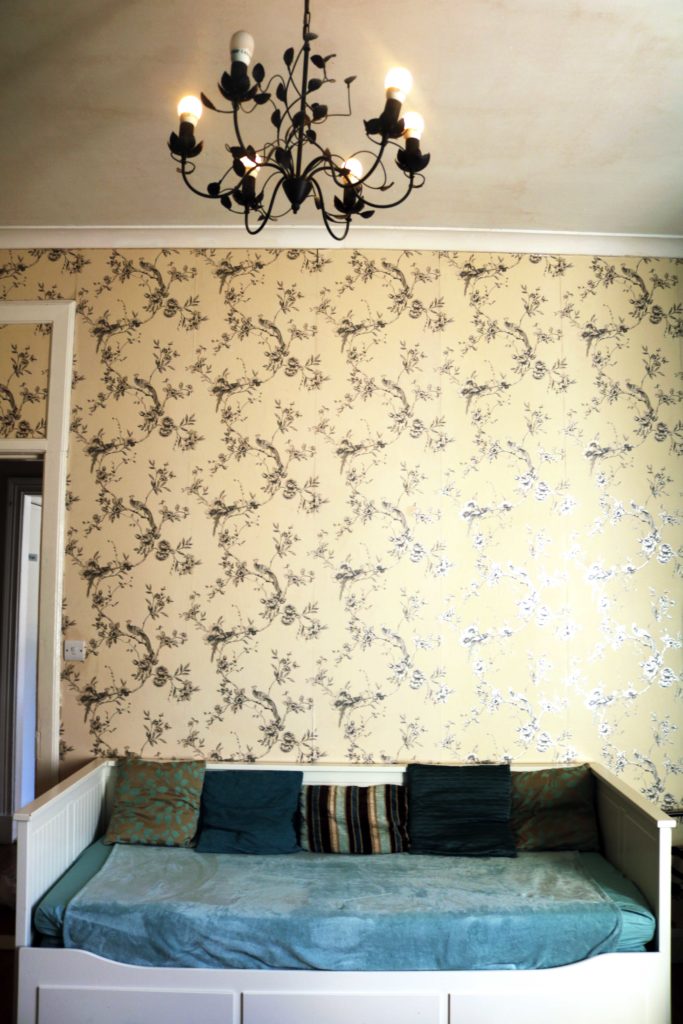 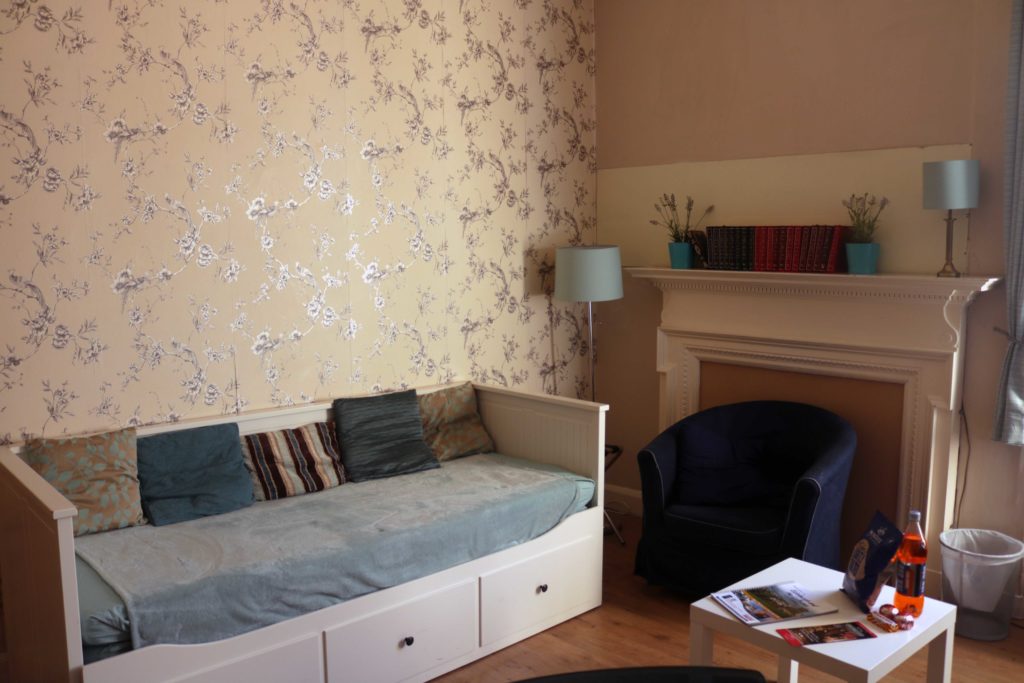 I found this lodging option the ideal candidate for the budget traveler for several reasons.

First and foremost, the hostess, Annette, is worth her weight in gold as an informal guide for pagan travelers.  Her knowledge of the area and of paganism in general ran quite deep.

Secondly, and almost as importantly, the location was perfect.  Unlike the central hotels on Prince Street, staying in a residential area means surrounding yourself with restaurants, bars and grocery stores where locals shop.  They are incomparably cheaper and more authentic than what you’ll found in the commercial districts.

Thirdly, if you’re going specifically for Beltane, this flat is merely a short walk to Calton Hill.

Finally, and most importantly, this is a safe area.  While there aren’t many bad neighborhoods in Edinburgh, I can only speak to the ones I spent time in myself.  Even as a solo female traveler, I felt safe and comfortable walking home at 2 o’clock in the morning.

Also, Annette left for me the most charming arrangement of local chocolates, soda and “crisps” (potato chips).  You won’t get that service at the Marriott.  Promise. 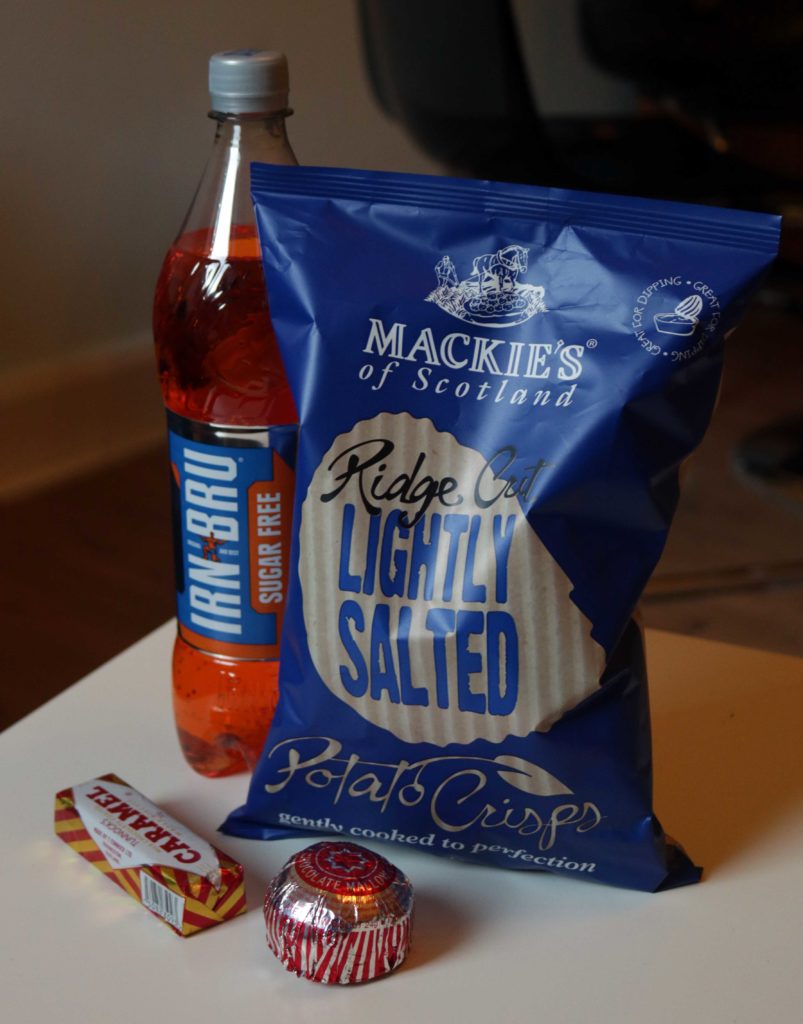 On the same road within easy walking distance, you’ll find an ATM and be spared the expense of a cab, as the bus stop to the airport is right across the way.

Produced and promoted by the Beltane Fire Society, you’ll find, on the night of April 30th in Edinburgh, Scotland, what is undoubtedly the largest Beltane festival in the world.

If you feel inspired to make the trip next year, tickets are available online about a month in advance.

Why the distributors have yet to come into the modern age with printable or electronic tickets, I am at a loss to tell you.

As of 2018, you must either pay in advance and pick them up in person in the center of Edinburgh at a vague, non-descriptive building on Rose Street or a sold out event at the gate. 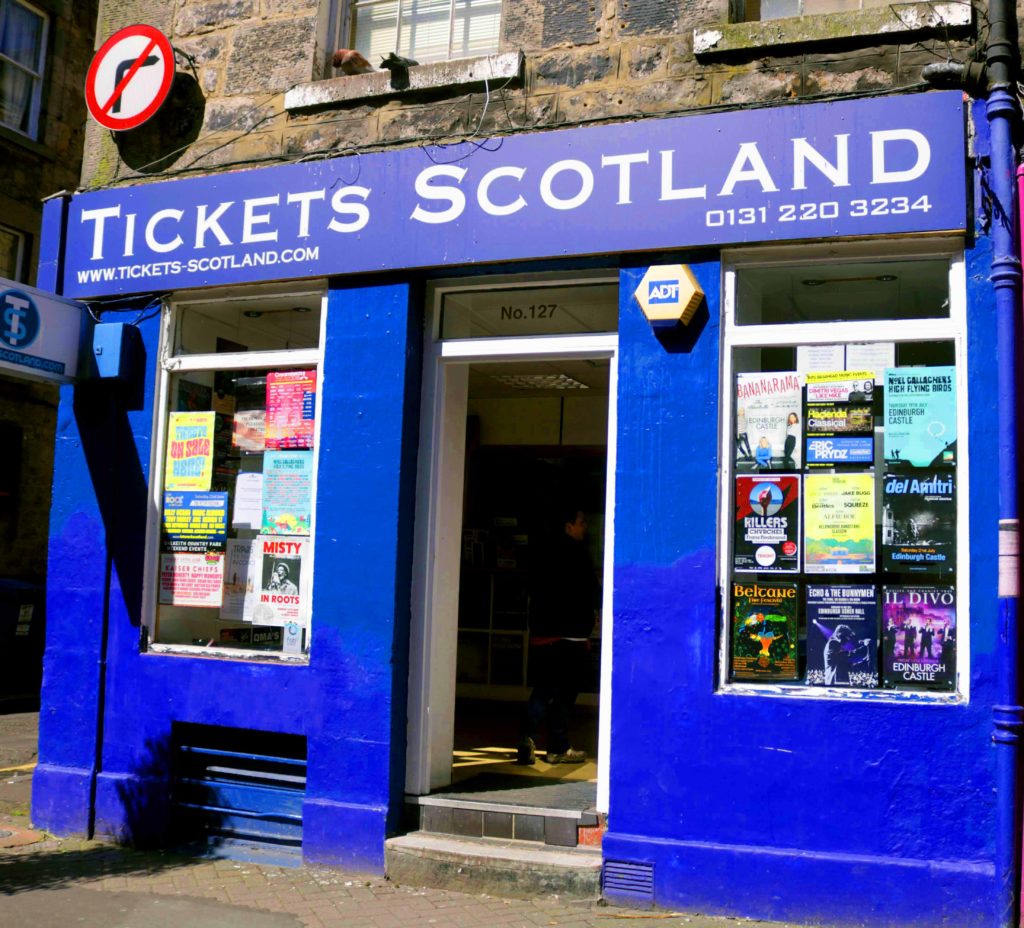 The atmospheric wonder this year felt especially high.  With a just-barely-waning moon (full the night before) the air buzzed with an electric lunar flare. 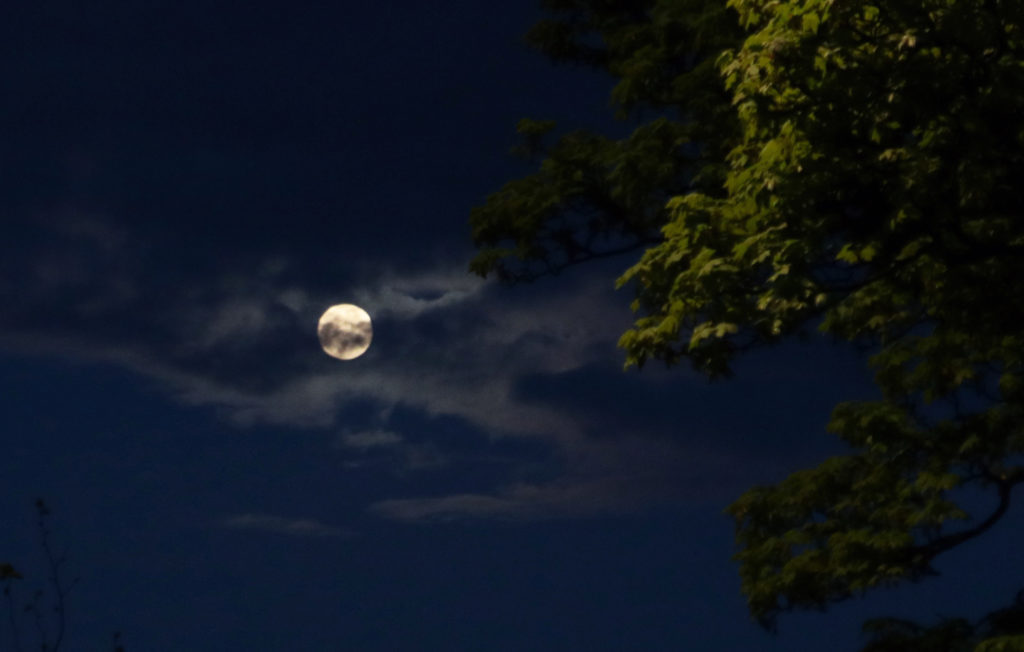 Of what little remains, most of the continued line of pagan traditions in Scotland flourish in the Highlands, not the urban center of Edinburgh.

And while the popular Beltane festivities that take place in Edinburgh absolutely base themselves in historical roots, know that the even the event on Calton Hill to which I refer in this article is absolutely a revivalist festival, not an unbroken lineage of tradition.

However, the performers use striking symbolism and thought-provoking theatrics to infuse it with powerful meaning. 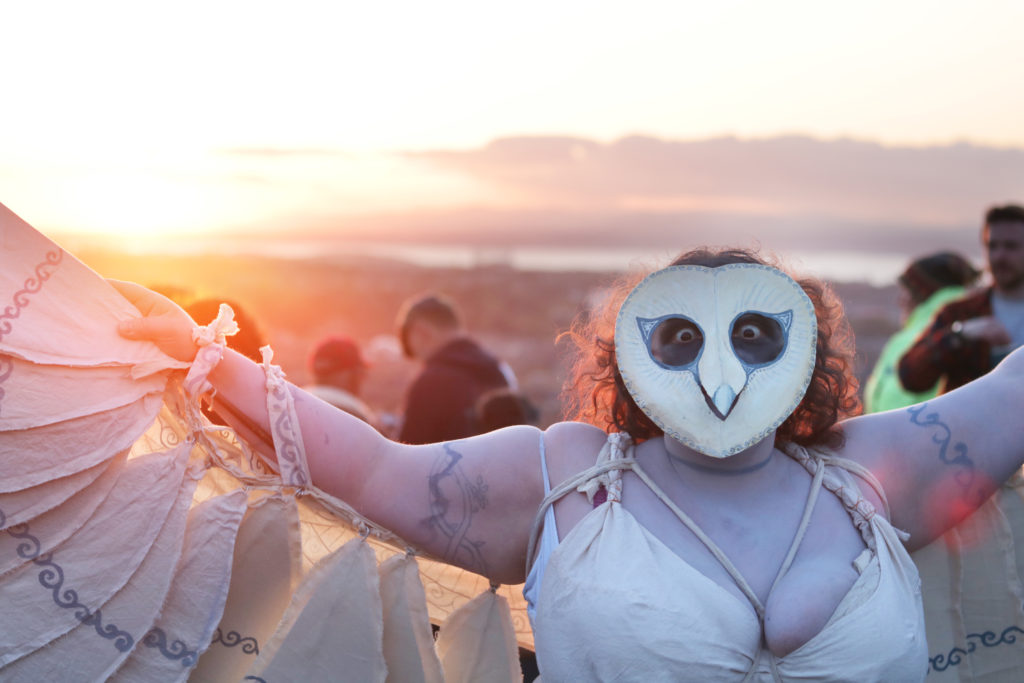 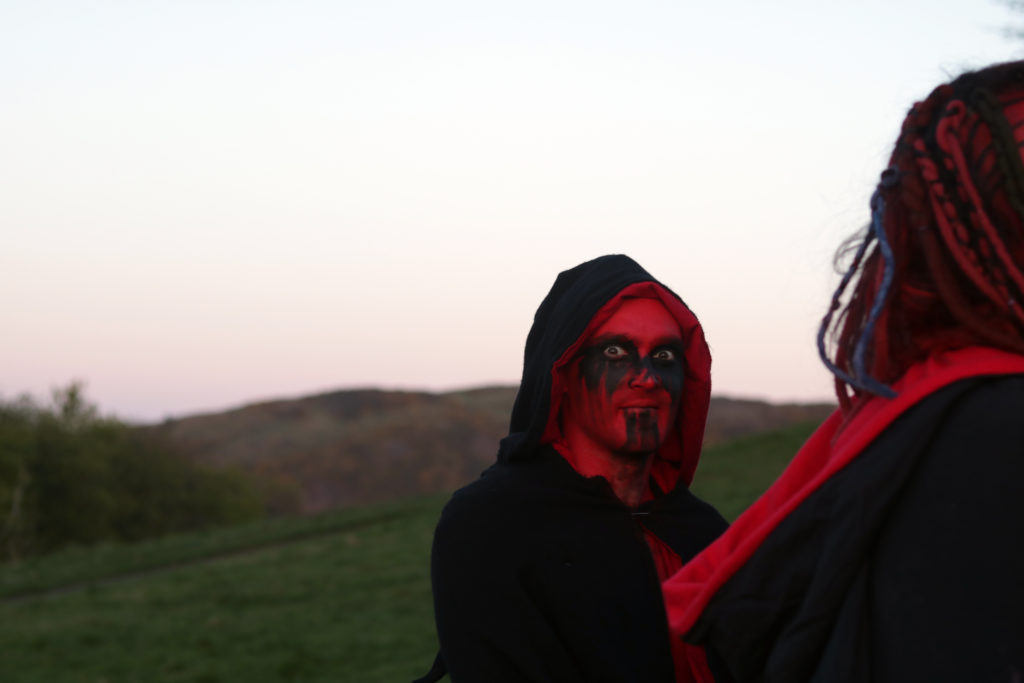 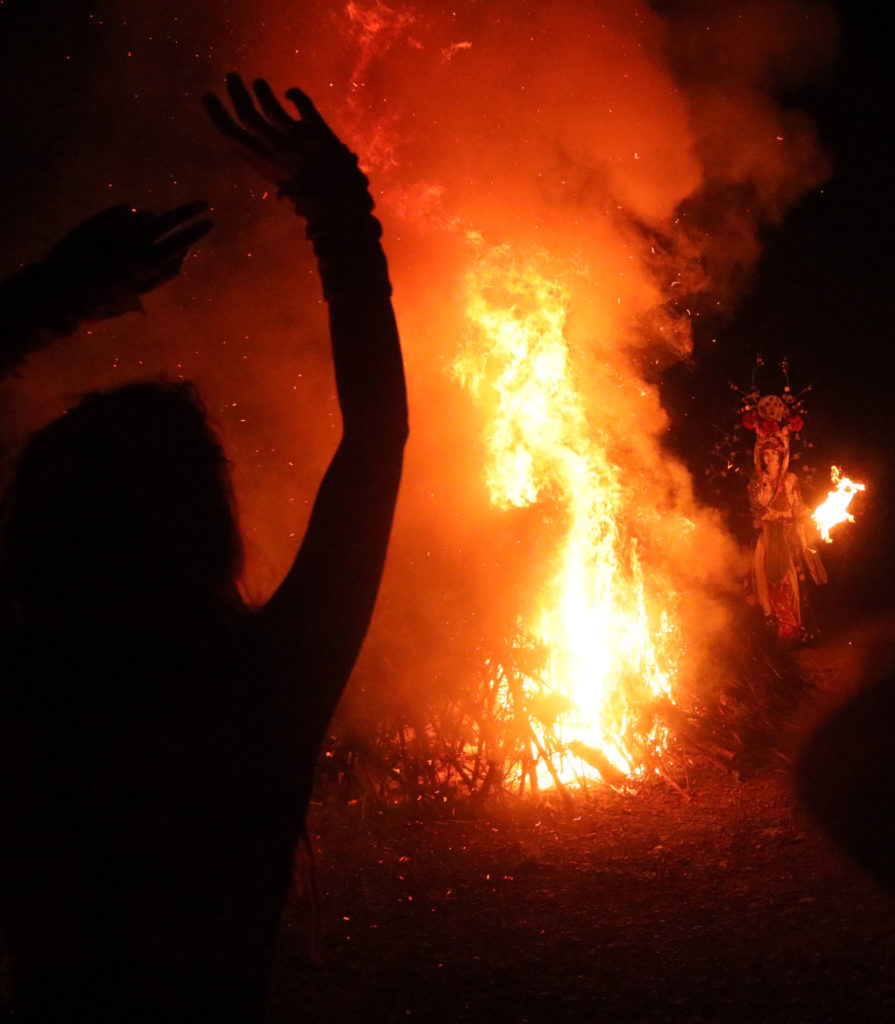 May Queen pictured on the far right. 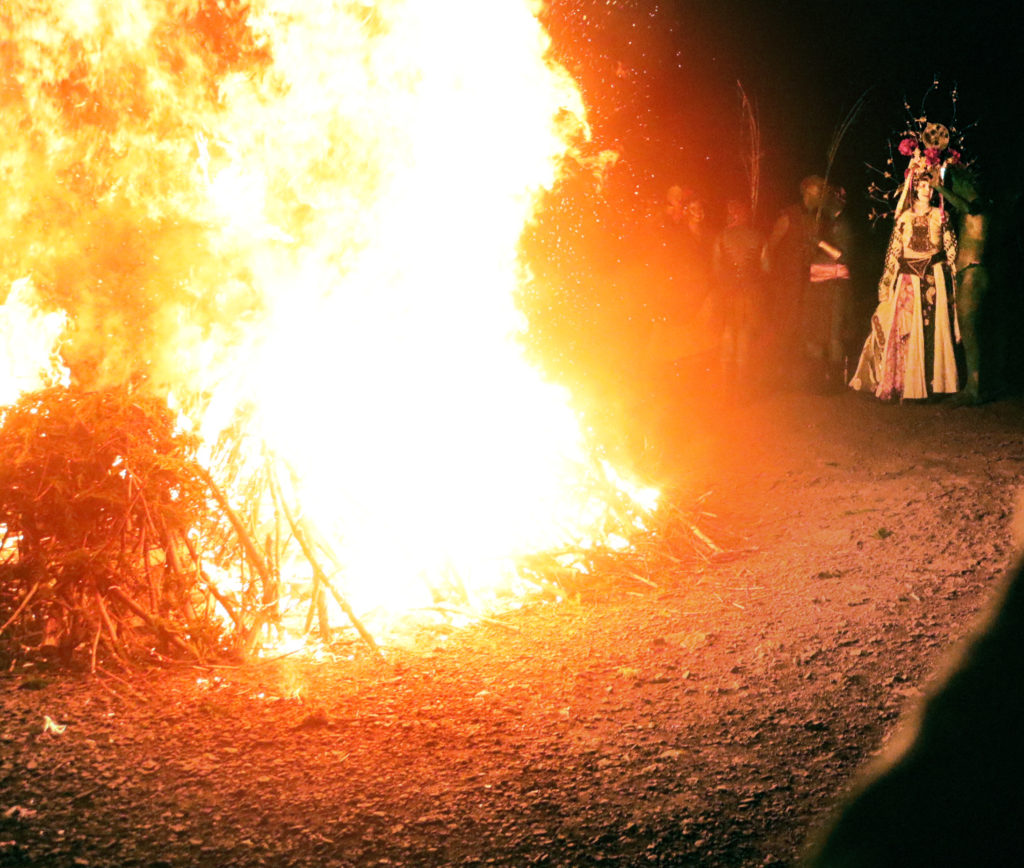 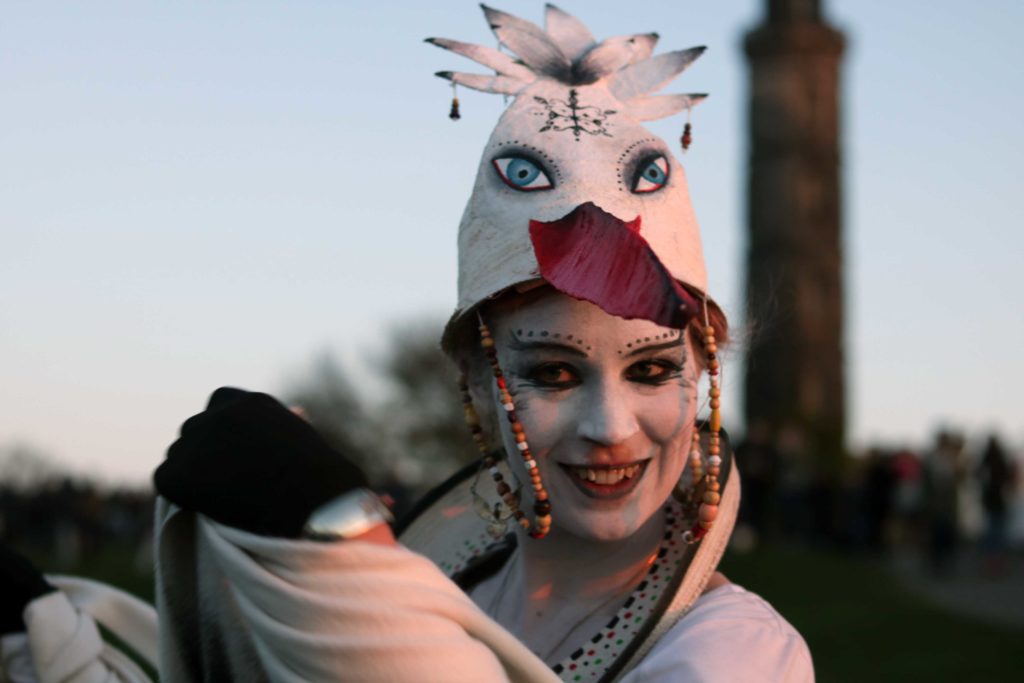 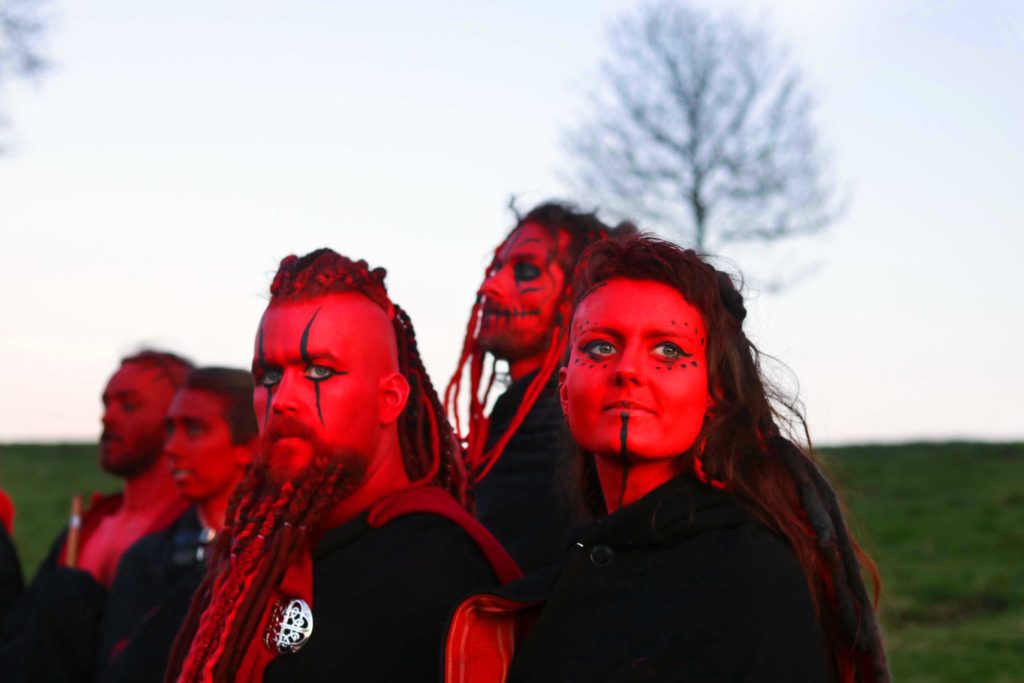 The reaction on this lady’s face is priceless.  LOL. 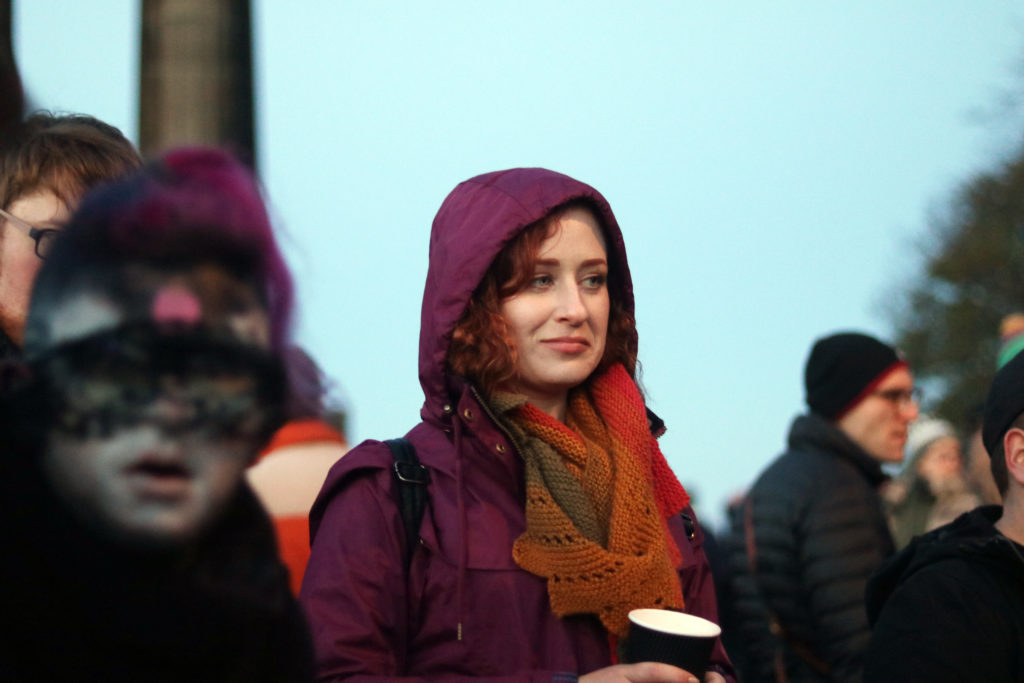 The festival takes place on beautiful Calton Hill, which is an attraction in its own right, with splendid sunset view that draw picnickers and sightseers from all over the world. 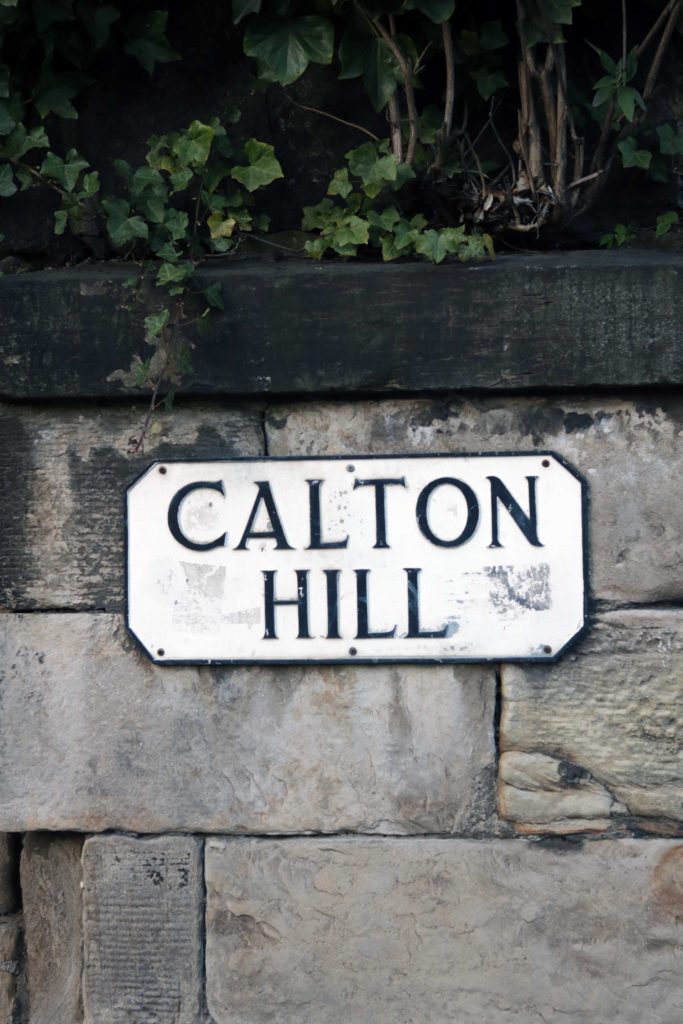 The yellow flower you see in the bottom left corner of the photo below is called gorse, and it has a number of metaphysical properties worth noting. 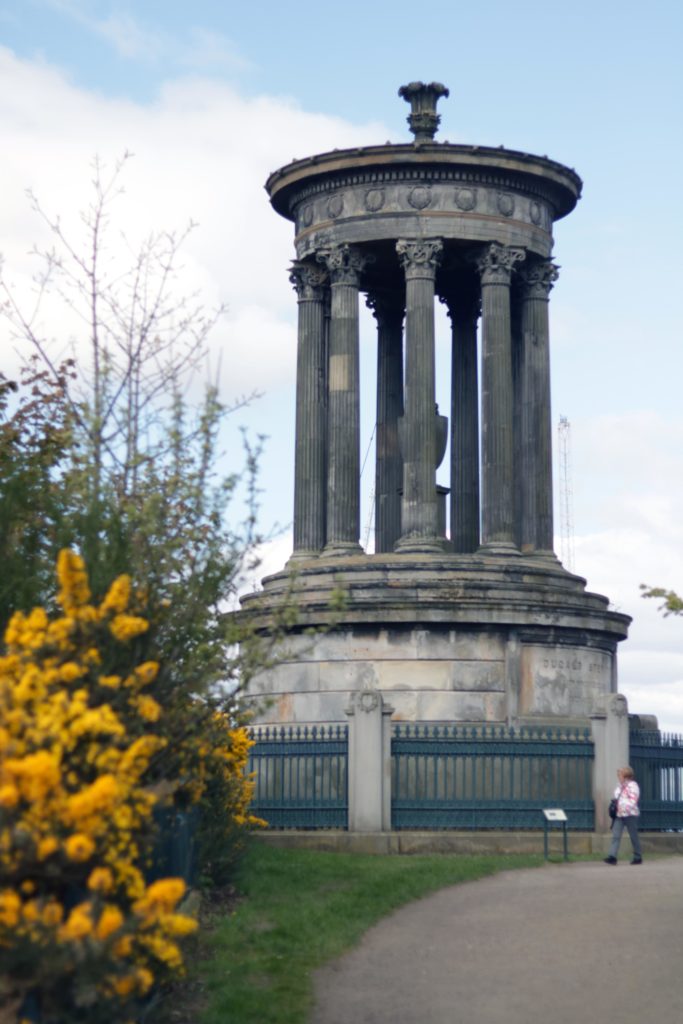 I was very tempted to collect some and take it home, but customs agents tend to frown on the unauthorized importation of live plant life. 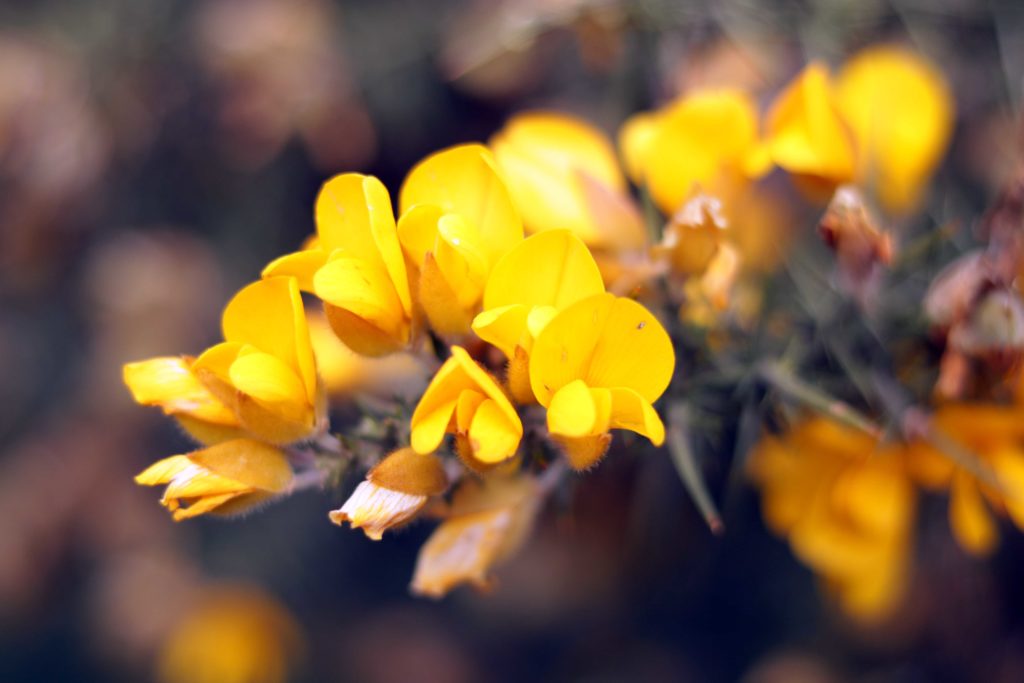 What to See & Do (Besides the Festival!)

Edinburgh steeps itself in a lovely, intriguing history of ghost telling.  So for goodness’ sake:

You simply must take the underground tour of the South Bridge Vaults.

Although only discovered and revived in 1985, the vaults date back to the mid-18th century and set the stage for some fabulous tales of body-snatchers, criminals and lingering spirits.

The near-pitch darkness and candlelight contribute to an appropriately disquieting atmosphere, and fumbling through the shadowy, cold-stone corridors leaves one with an eerie heaviness.

I went with Mercat Tours and quite enjoyed it. 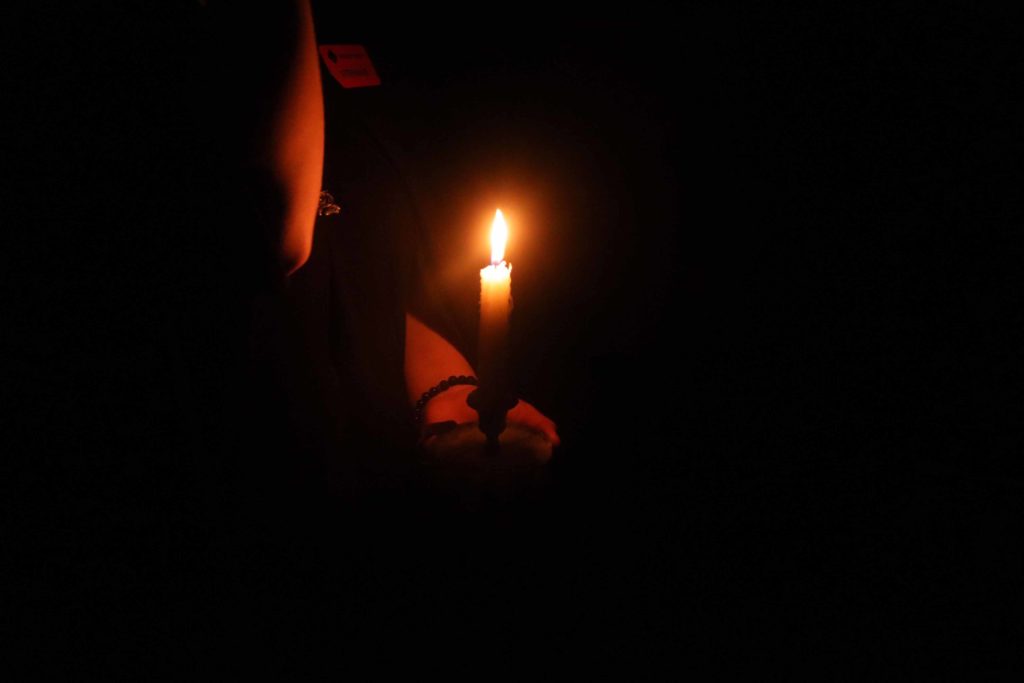 If you want the budget version, a free ghost tour meets in front of the coffee house at 144 High Street on the Royal Mile, although I know not if they actually go underground.

They’re easy to spot, though!  You’ll see the yellow umbrella and signs before you realize it. 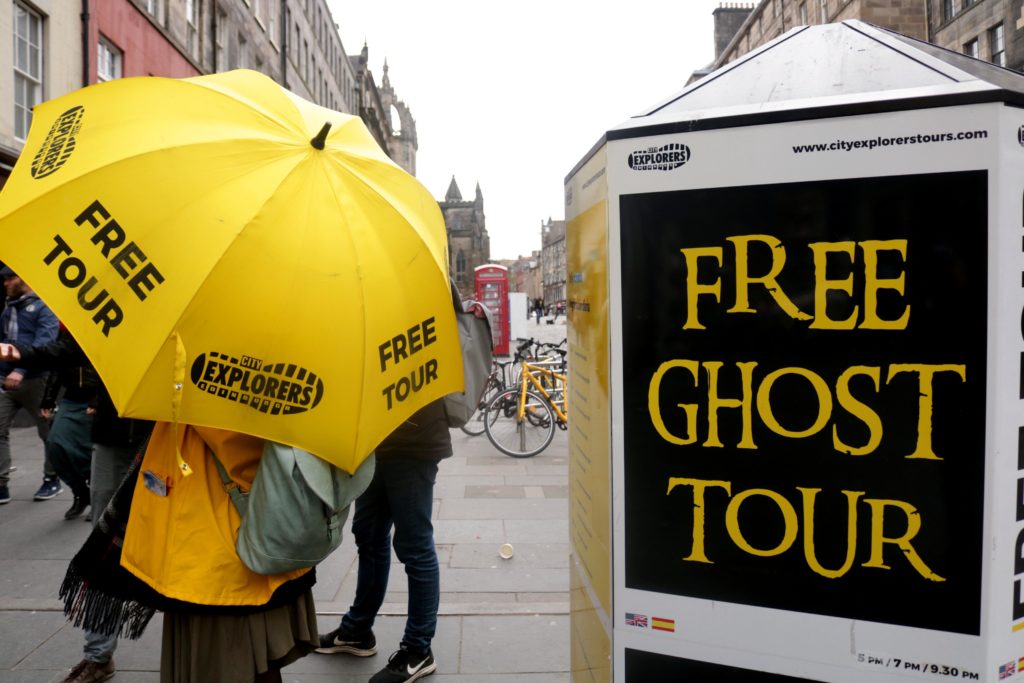 Please bear in mind, you are expected to tip your guide on the free tour.  Be generous.  Believe me when I say, these people are extraordinarily underrated for their deep knowledge on local history and lore.  Really, you should pay them what you would pay on the “paid” tour anyway, so it doesn’t make much difference.

If you regularly read this blog, you know from my previous travel posts that I derive very little pleasure from the past time of shopping.

However, if you like to shop whilst on vacation, I begrudge you not.

Edinburgh makes an excellent place to scout out the stone known as Scottish marble.  Find it set into jewelry or even raw. 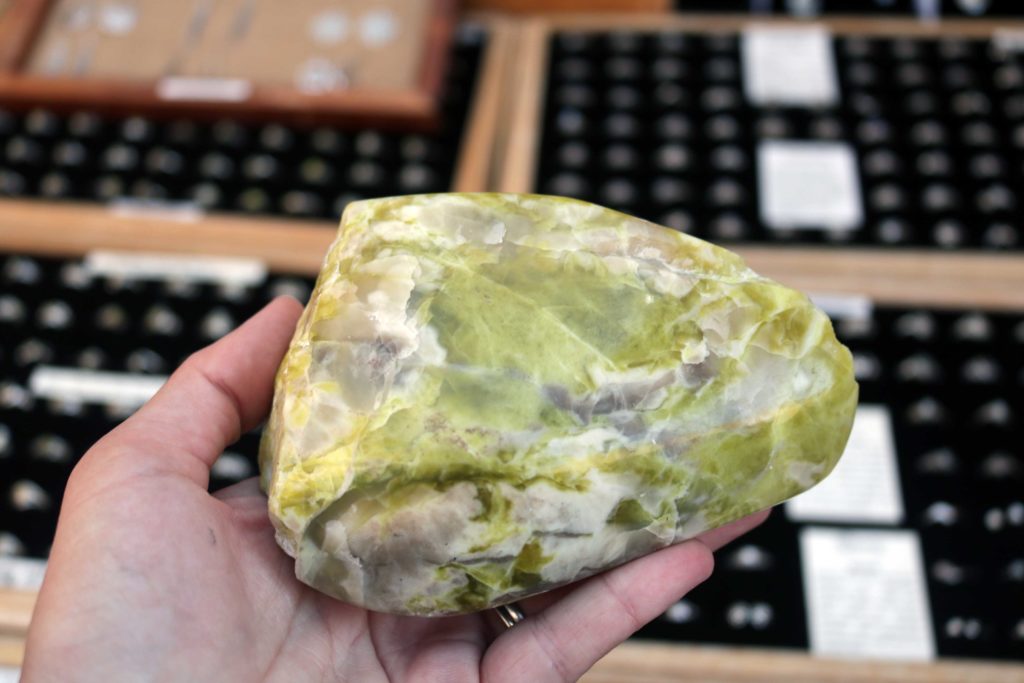 I bought this ring set with Scottish marble for its delicate features and Celtic knot work. 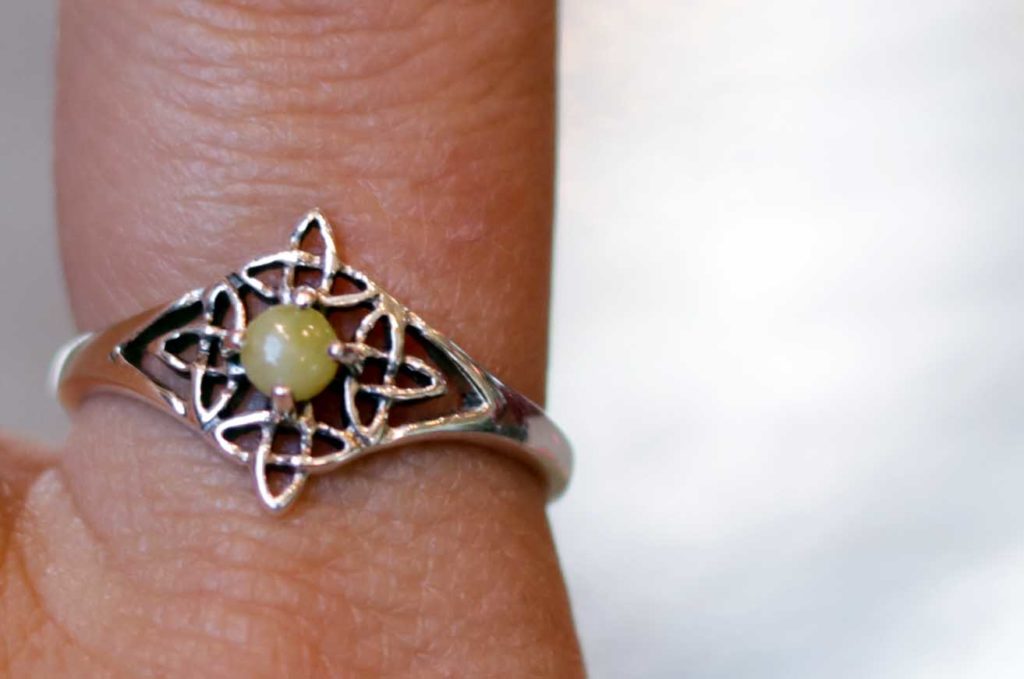 Art Junkies, Get Your Fix

The Scottish National Gallery contains quite a small collection relative to European standards.

However, they possess some impressive pieces, including a number of beautiful Renaissance works from Raphael and Leonardo da Vinci.

Admission is free, so unless you are short on time, there’s no excuse to miss it. 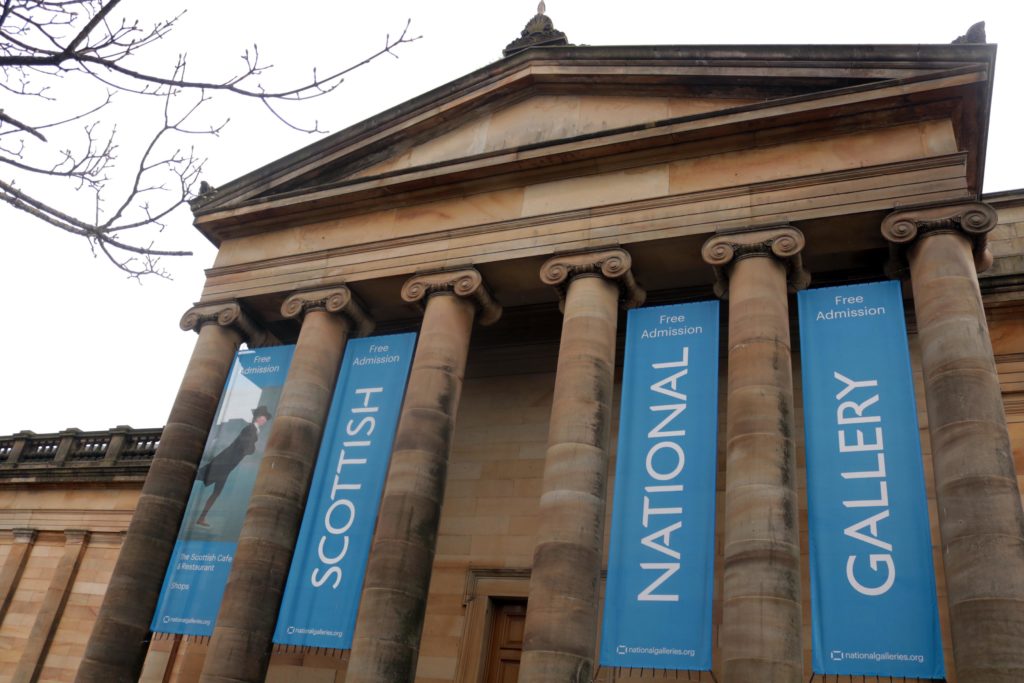 Of particular interest to the pagan traveler, you’ll find Titian’s Venus Rising From the Sea.

Scotland and the UK in general unfortunately bear a terrible reputation when it comes to food.

While this reputation is not entirely undeserved, it is also somewhat unfair.

When compared to the rich, complex, precise culinary traditions in France and Italy, Scotland ranks rather low—-but then again, not many cultures take their food as seriously as the French and the Italians.

I strongly encourage you to ignore anything you may have heard about the regional dishes in Scotland and try them anyway.

Known as haggis, the most common local dish tastes a lot better than it sounds, and although the Scottish cooks traditionally make it from sheep innards, many restaurants serve a vegetarian version as well.

The cooler climate lends itself well to the heaviness of this meal. 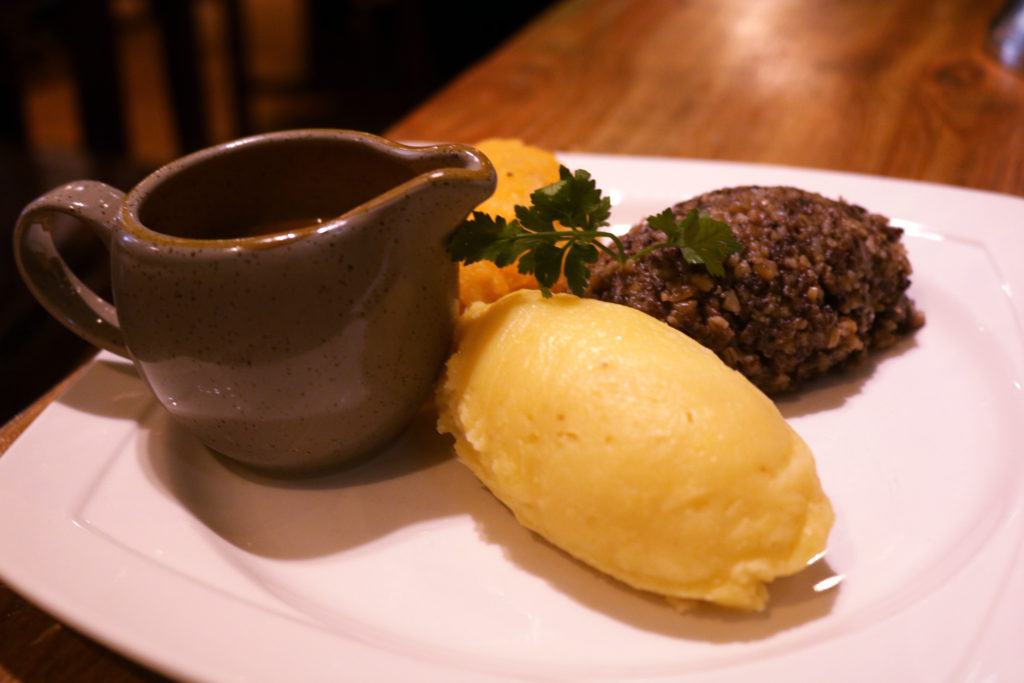 While not specifically Scottish, if you simply cannot push past the idea of eating sheep innards, “fish and chips” still check the box of “regional” to the UK in general. 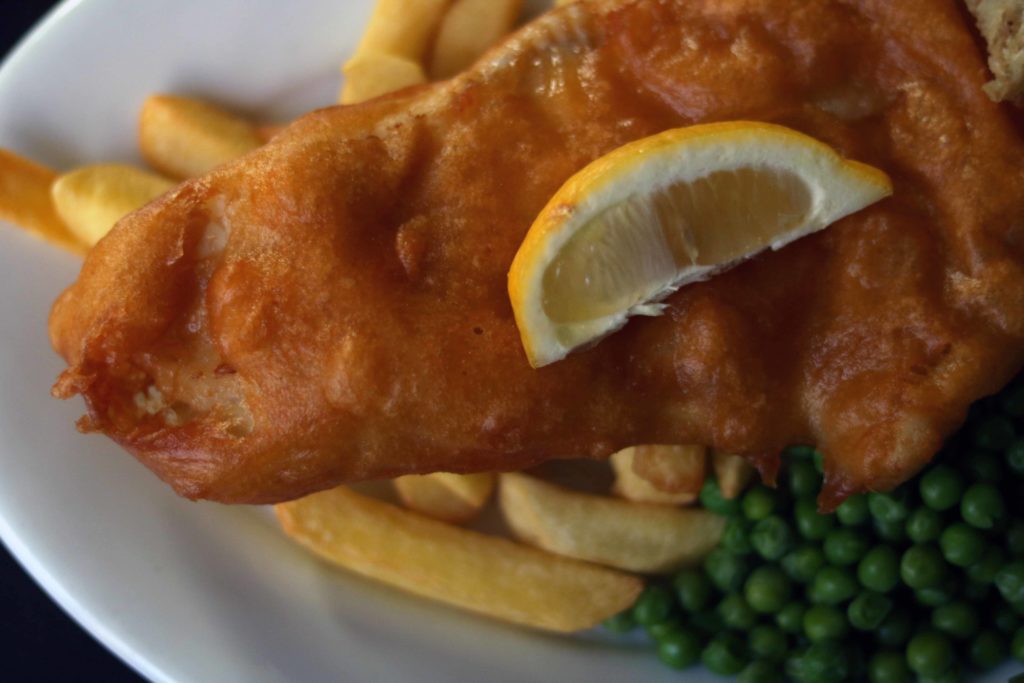 Finally, if you must eat something not even remotely Scottish, due to the (complex, dark, difficult) relationship between the two countries, the UK produces some of the best Indian food in the world outside of India itself. 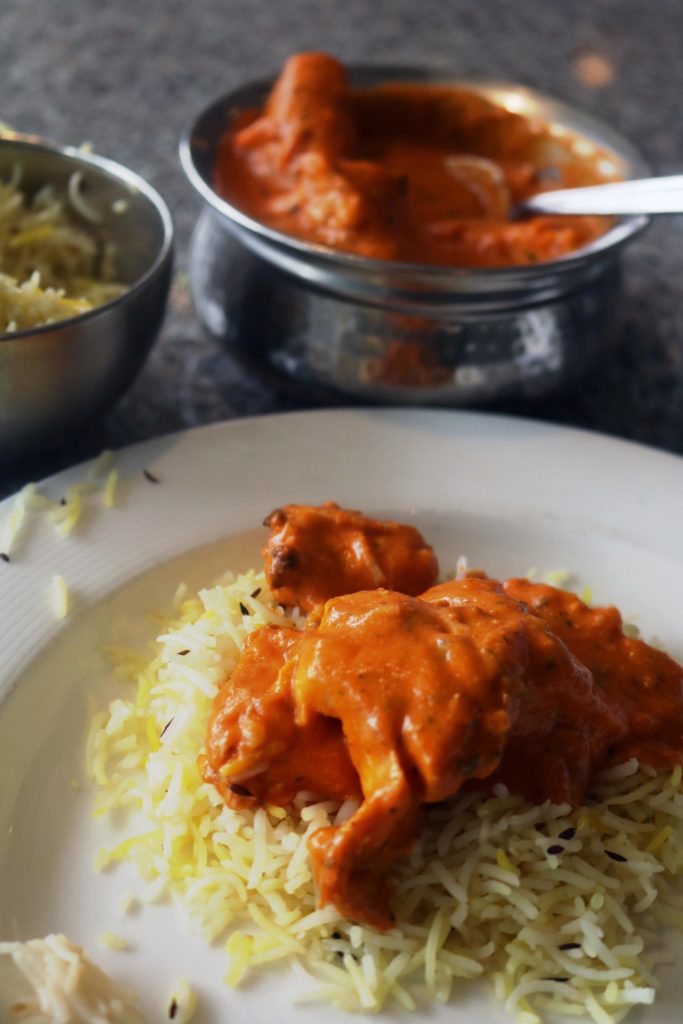 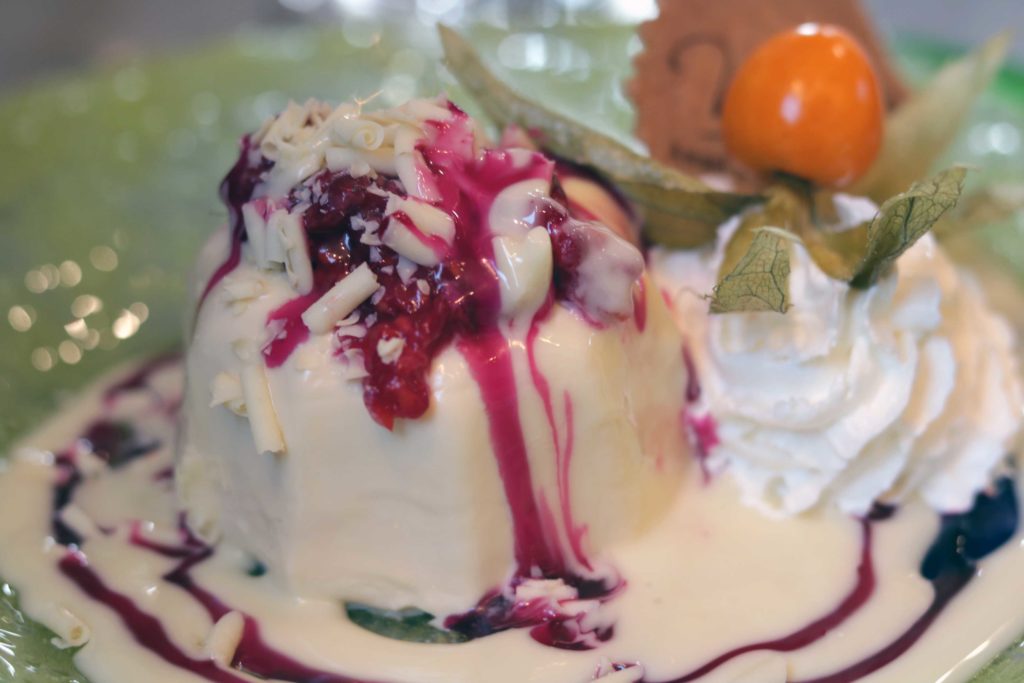 Although Scotland falls short of first-class culinary fame, alcohol is a another matter entirely.

Make no mistake: the Scots know their drink, they love it, and as a population, they consume a lot of it.

Some carry as many as 200 varieties.

All the bartenders ably talk about the finer points of the art for hours and regard it with near-religious reverence. 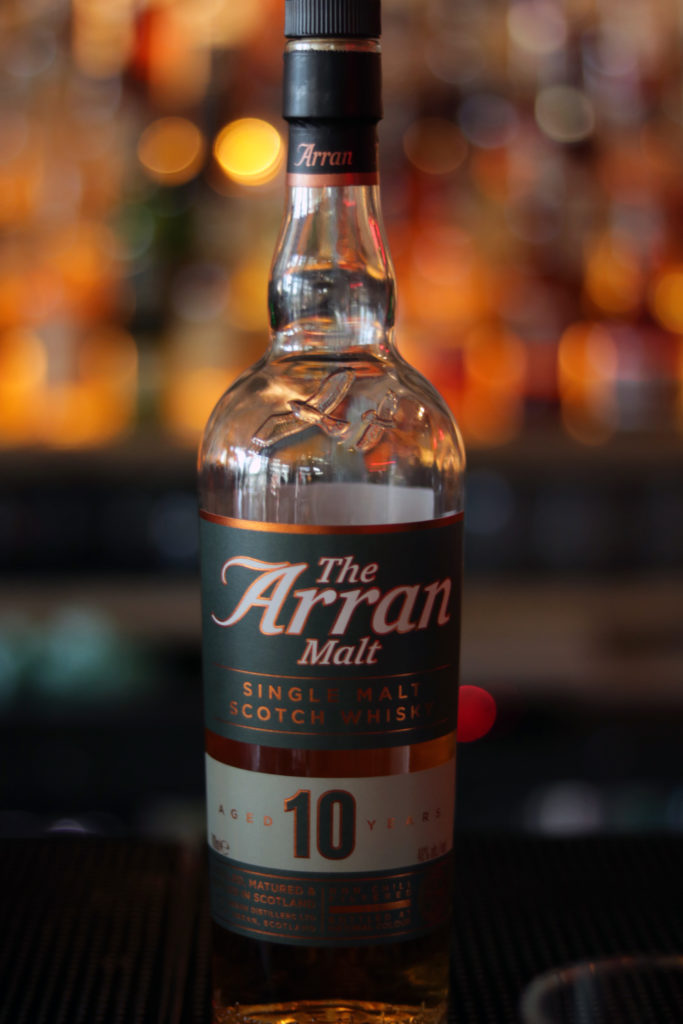 If hard liquor turns your stomach or swims your head, Edinburgh also boasts several vastly underrated IPAs.  My favorite among them:  Punk.

I admit, I tried it for the edgy name, but I kept ordering it.  Because damn.

Get it on tap in the bar, get it in the bottle to take home. 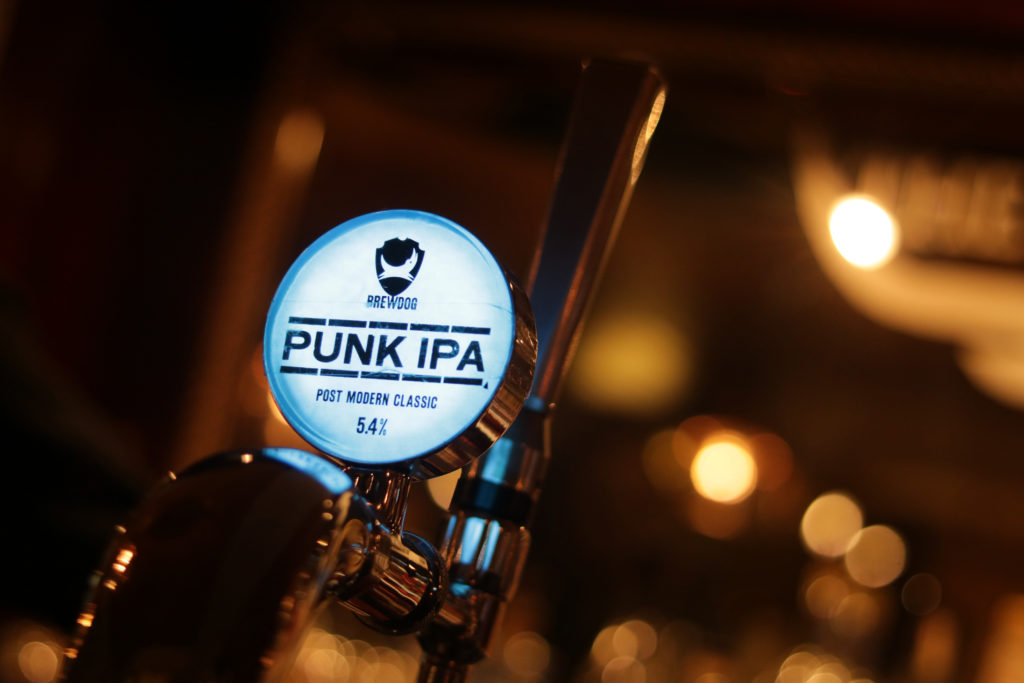