This month, I flew to Bucharest to investigate the origins of the uniquely colorful practice of witchcraft in Romania.

We drove across the country to learn about the deep roots of Romania’s rich tradition of magic and immerse ourselves in the untapped beauty of this mythical country.

From perfectly preserved Medieval cities to the tribal magic of the Romani people in the Transylvanian countryside, Romania offers a wealth of untapped beauty for the intrepid pagan traveler.

Join me on my photographic journey through this underrated destination and discover the surreal, spellbound dreamscape of Eastern Europe

(Please note:  The term “gypsy” is sometimes considered pejorative.  It appears in this article only when directly quoted or out of respect when practitioners or tribal members expressed a preference for it over the alternative “Roma.”) 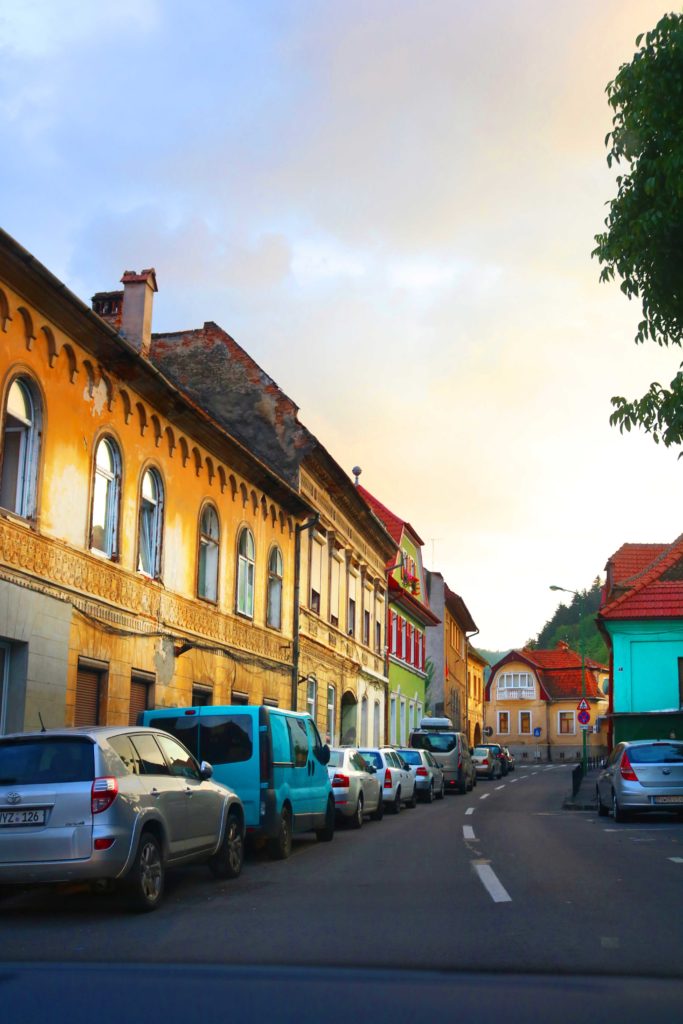 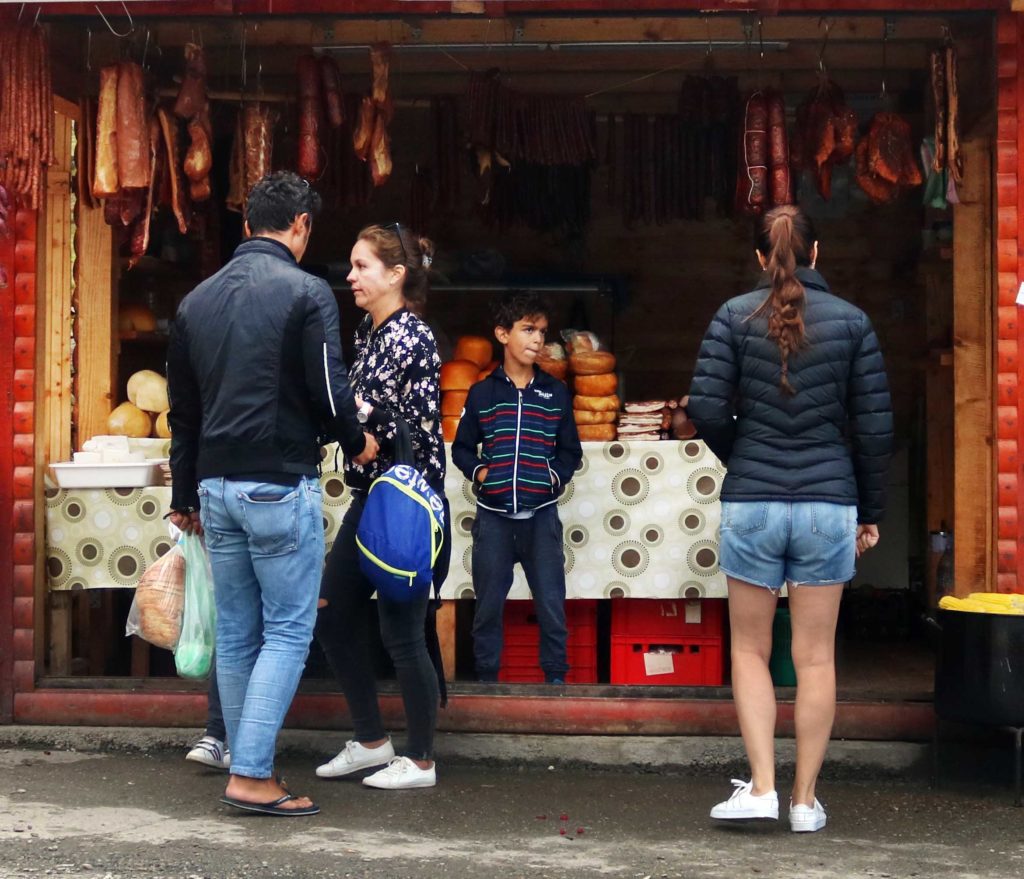 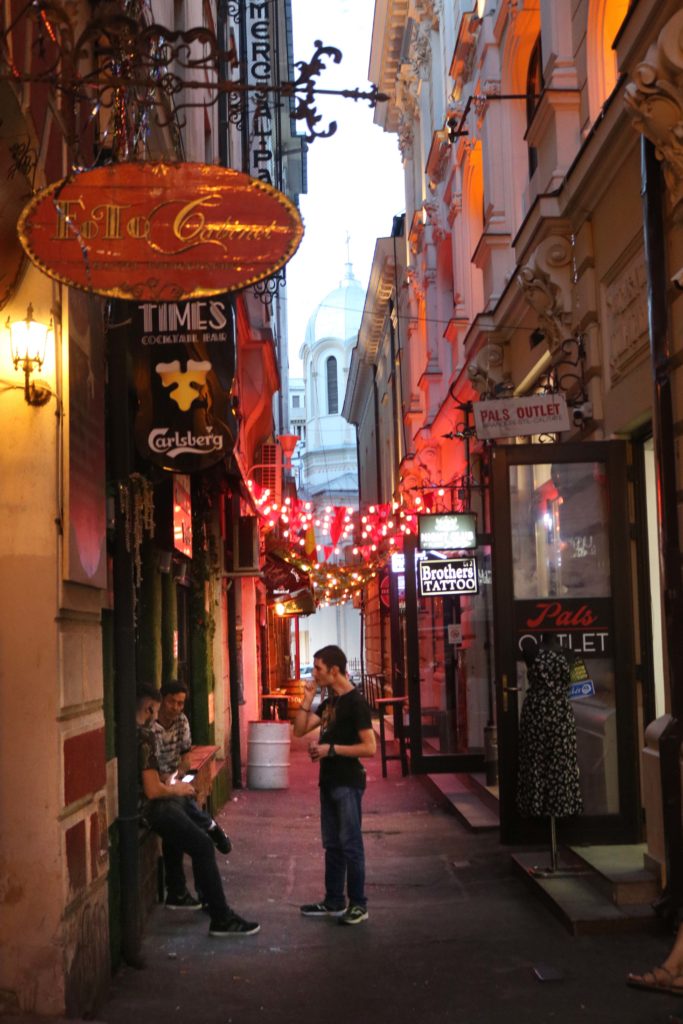 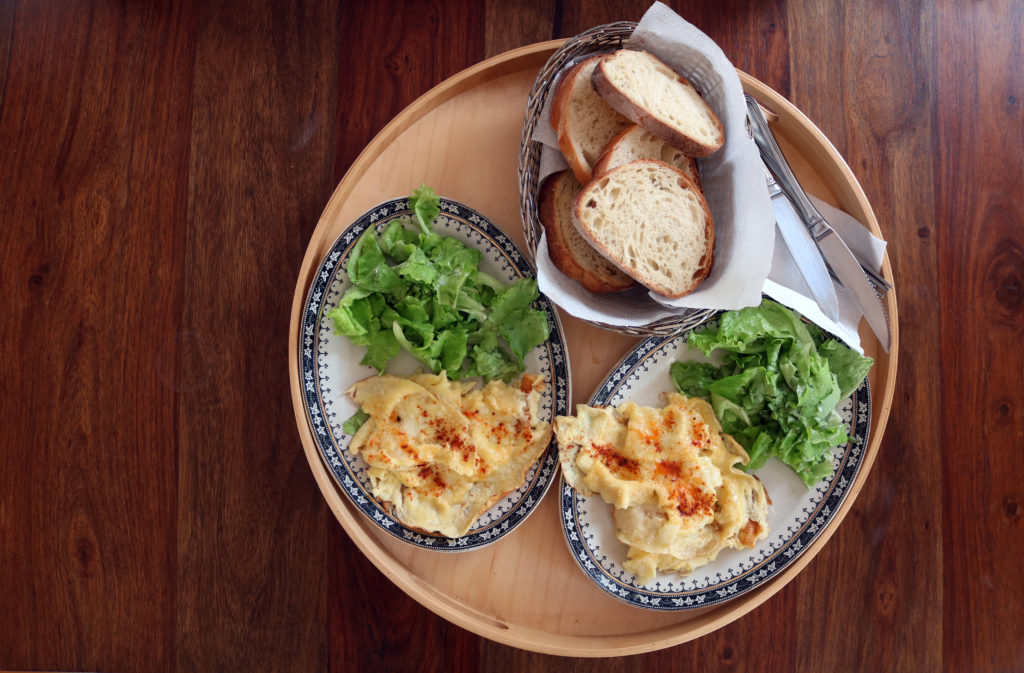 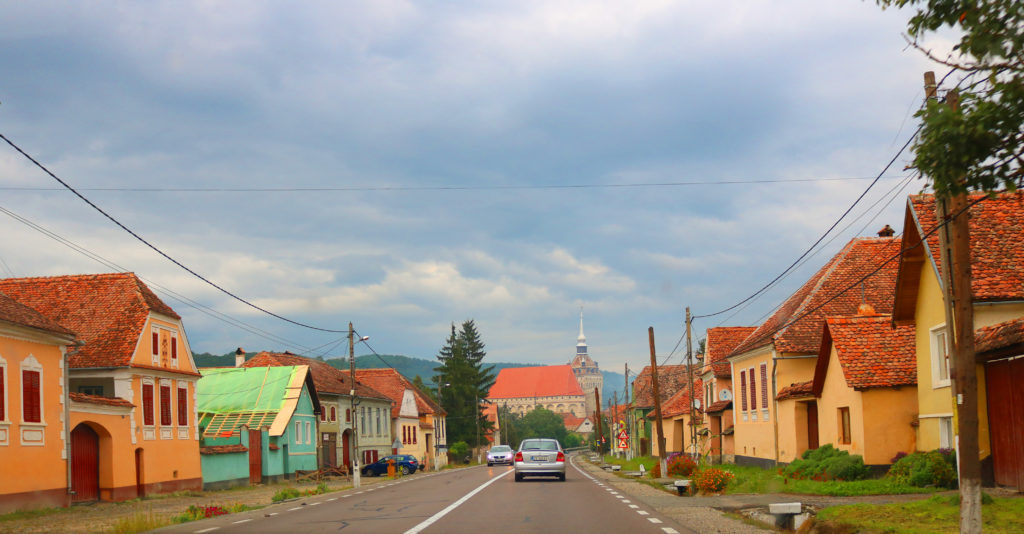 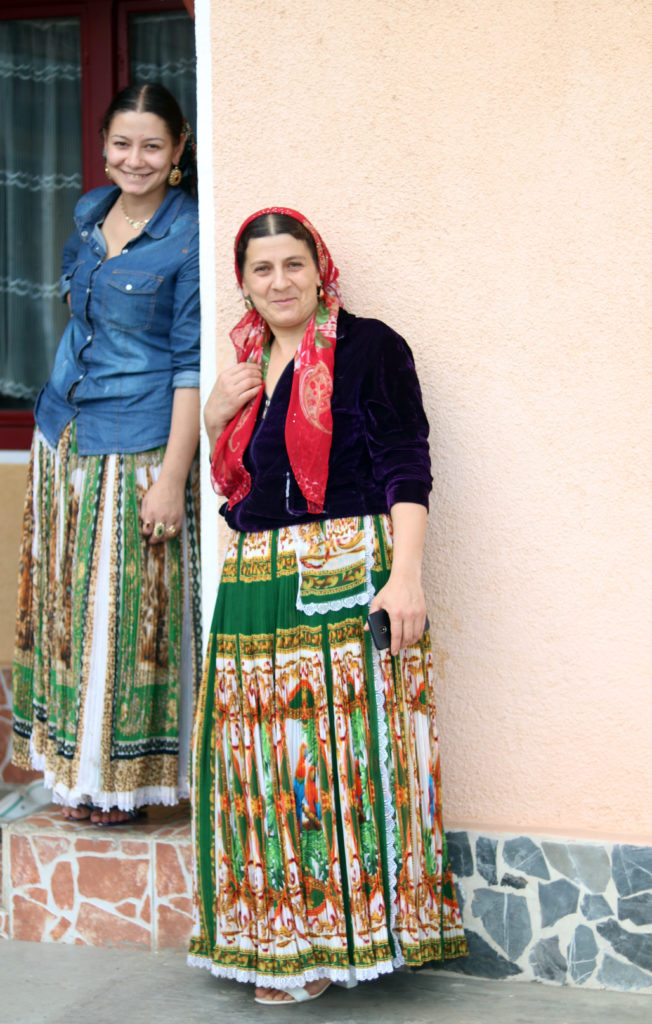 Like most places in the world, witchcraft in Romania remains a complex, and often taboo, subject.

Romania is home to many forms of witchcraft.  I chose to focus on one.

First, it’s important to note the difference between the neopagan practice of “gypsy magic” (popularized in the West by modern Roma pagans) verses the Roma people themselves (whose practices descend from an unbroken lineage of Hinduism with Christian and Muslim influences).

In the bustling city of Bucharest, I get a chance to stop into one of Romania’s few true occult shops, the Hathor House.

I take some time to speak with one of the oracle readers, Andrea.

I ask her if she carried any books in English on the subject of indigenous Roma magic.  She explains that literature like this is difficult to find because the rituals of the Roma are passed down orally.

In short:  learning about the Romani people is best done in person.  I make a few phone calls and get ready to head off into Transylvania.

The Link Between Gypsy Magic and The Roma

Although most Romani people identify themselves as Christian (as well as some Hindus and Muslims), their traditions and rituals inspired neopagan Romani authors like Patrinella Cooper to popularize a form of witchcraft known as “gypsy magic.”

The practice of “gypsy magic” emphasizes fortune-telling, the use of charms, healing and protection spells.

“Gypsy magic” rides a strange middle-land between neopaganism and hereditary witchcraft because often, much is borrowed from the unbroken lineage of the practitioner’s ancestors.  These witches recognize their practice as a form of magic.

For the rest of us, this form of magic shares a lot with the larger practice of modern witchcraft.

We owe many common divination techniques (like various approaches to tarot reading and palmistry) to our Romani sisters.

I set out on an epic trip from Bucharest to the Carpathian Mountains to find out more about this wildly beautiful tradition.

We took the scenic route.  On the way, we stop in some of Romania’s most treasured sites.

Among the highlights, we drive the famous Transfăgărășan highway through the Carpathian Mountains.

We also check out the somewhat overrated Bran Castle, which has some very loose associations with Vlad the Impaler, aka “Dracula.”

(Did you know Bram Stoker based his character on a real person?)

Despite his minor role in the castle’s history, his reputation continues to draw tens of thousands of visitors a year. 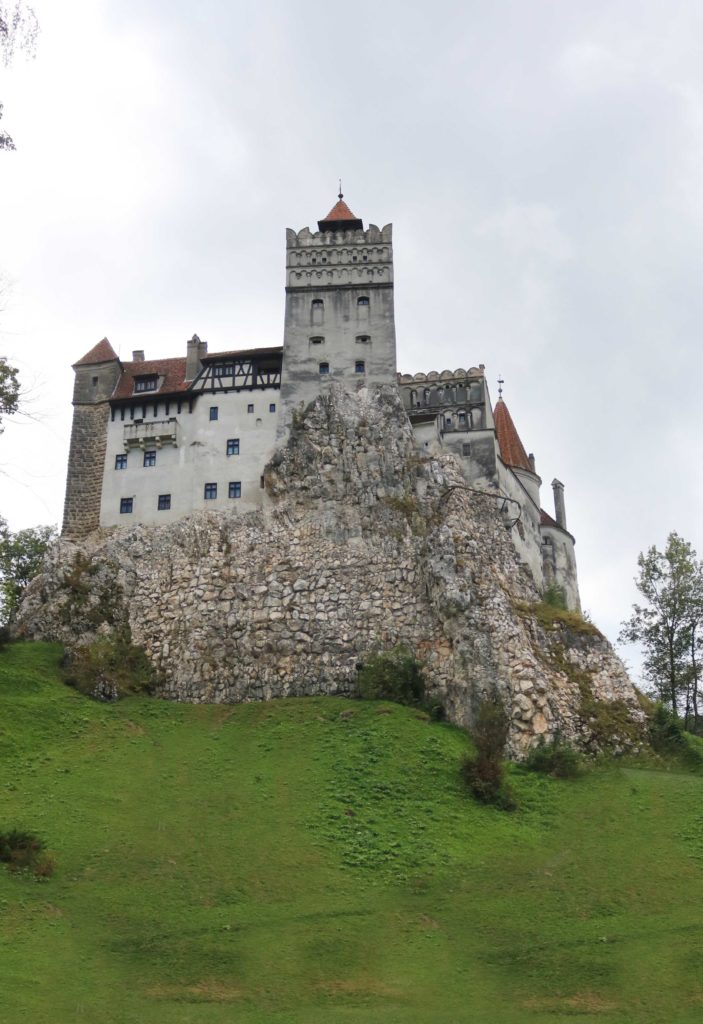 Oh yeah, and we eat some amazing food. 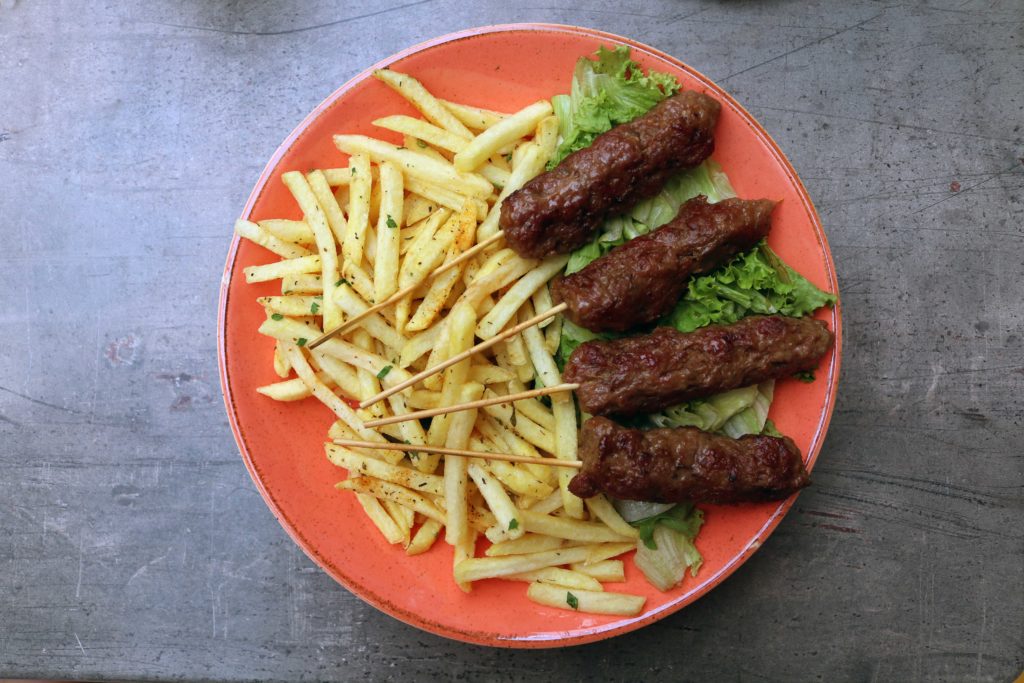 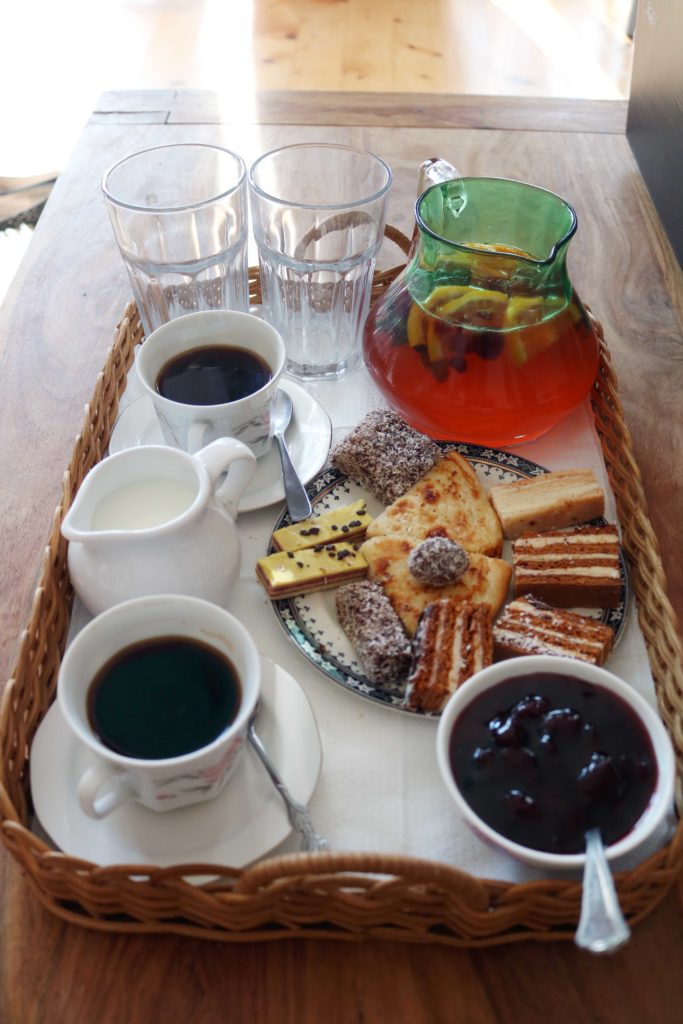 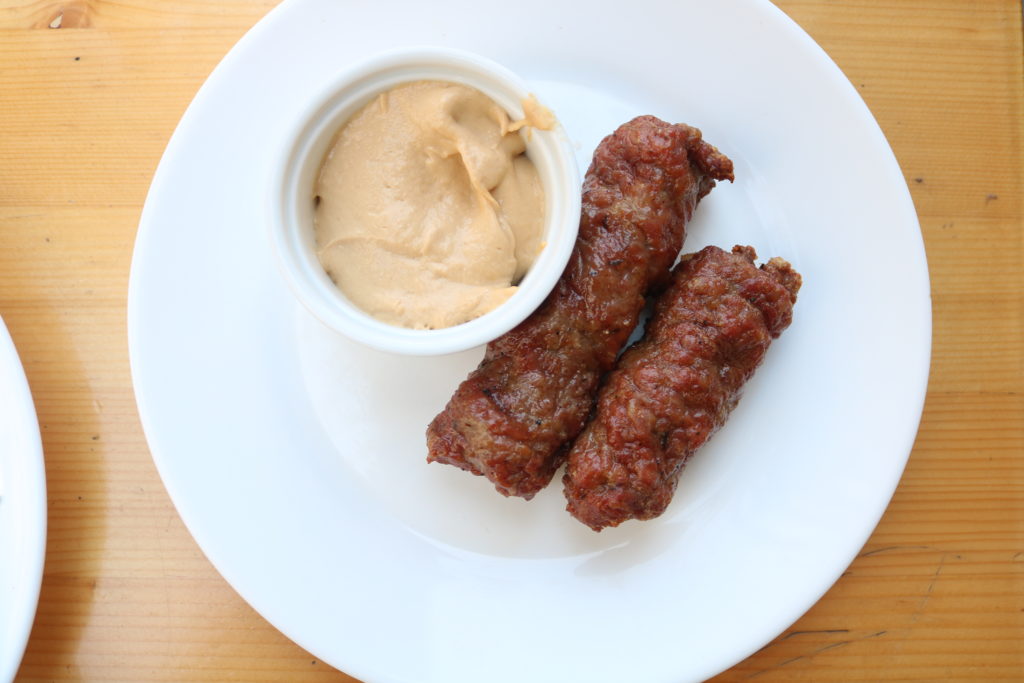 Finally, we make our way to the Medieval town of Sighisoara, where I happened to stumble upon a fashion shoot in the walled city.  Yay, random models! 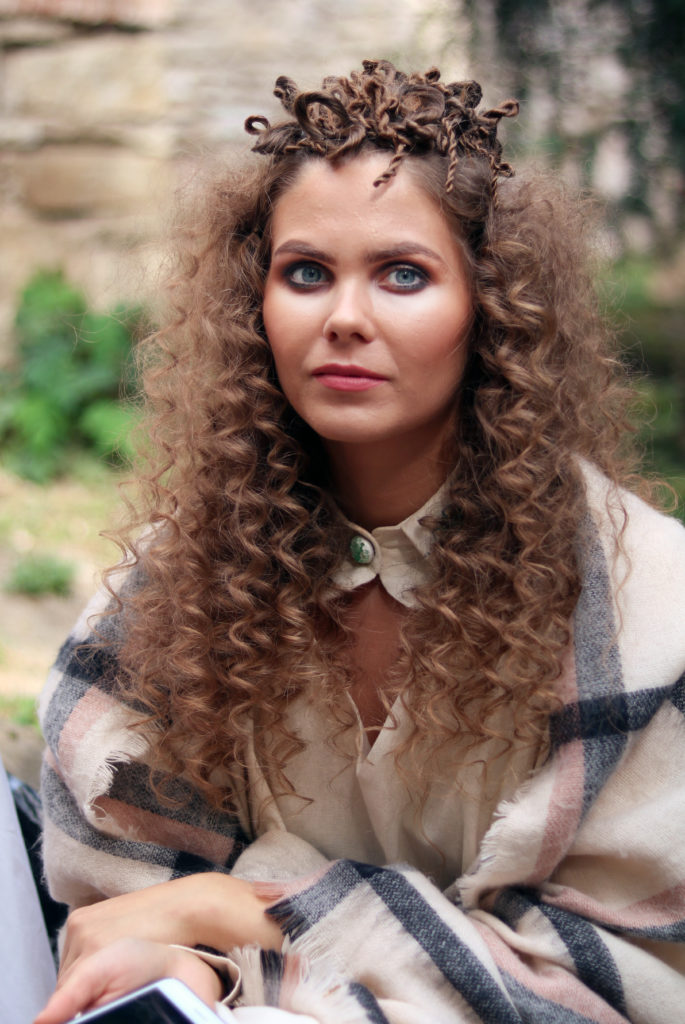 It’s time to settle in and get ready for my meeting with the Gabor tribe the next day.

Not to be confused with Romanians, the Romani people make up the second largest minority group in Romania.

During Medieval period of present-day Romania, the Romani people suffered systemic slavery.  Unfortunately, the stereotypes and prejudice born from this history continue to fuel racism to this day.

Many Romani tribes live in chronic isolation from mainstream Romanian society.  They often shut out outsiders to protect their culture.

Getting to them proves challenging, but exponentially rewarding.

It’s not a simple matter of rolling into town.  You need to hire a guide for this one.  Tribal Roma tend to value privacy.  Hiring someone who knows them makes everything infinitely easier.

The only relevant English-speaking tour company I find in Romania is this one.

I talk with the manager, Chuck Todaro, for several days online and on the phone before booking.

Chuck hails from New York, but he’s been working with Roma people for over a decade.  He speaks highly of the family I planned to visit.

I want to make sure his organization is as considerate of the tribe as possible.  I ask a lot of questions about his history with the Roma people and the way he manages tours with them.  In particular, it eases my mind to learn that the Roma people are paid directly for their services.

I book a homecooked meal with the family several days in advance.

We spend a lot of time reading up on local customs before we go.  I want to make certain I use the appropriate vocabulary, manner of dress and courtesy.  Little things matter in these situations.  For example:

Is “gypsy” an offensive word?

“Not to me!”  Twenty-seven-year-old Klara of the Gabor tribe declares without hesitation.  “To me, gypsy means magic and mystery.”

As she talks to me, she works.

Klara expertly crafts dresses in her tradition.  She beads a hand-pleated panel of a skirt as we chat in her home about 40 kilometers outside Sighisoara. 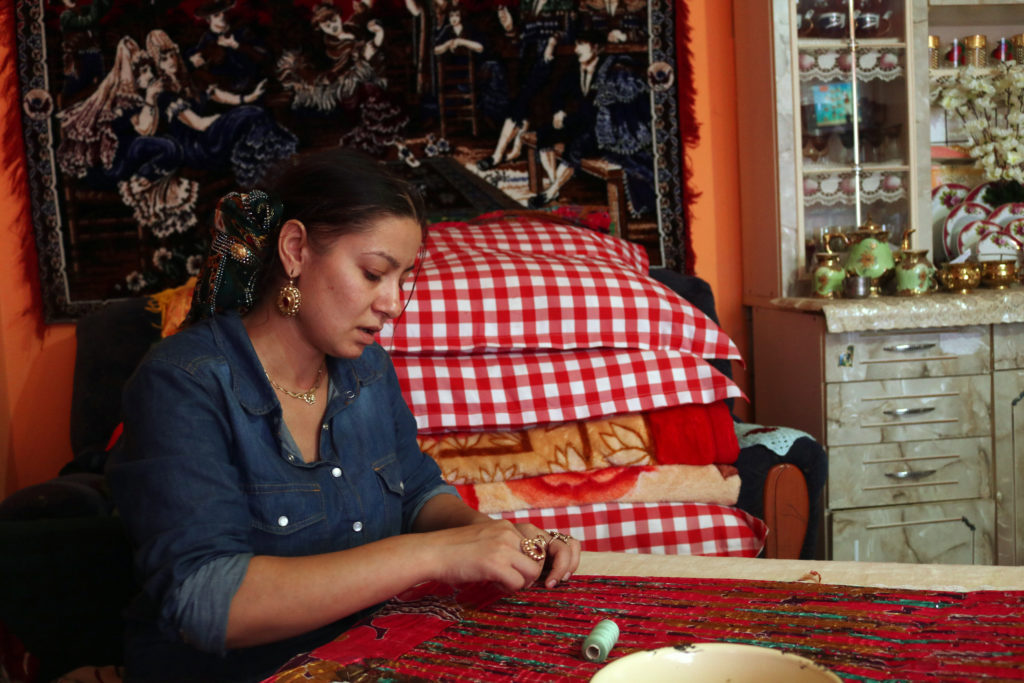 I ask her how she feels about the alternative term, Roma.

“That’s the more politically correct word.  But I don’t like it.  To me, it’s a denial [of my heritage].”

In the kitchen, her mother prepares a meal from scratch for their guests.  And I mean from scratch.  “We kill the chicken in the backyard.”

Klara and her family started offering tourists a glimpse into the cultural life of her tribe about 15 years ago.  Over the last decade and a half, people from all walks of life stayed with her.  She counts among her former guests a Shaolin monk and a Wallstreet broker.

I feel comfortable with Klara.  Her honesty and openness give me the courage to ask her some delicate questions about Romani life.

Klara says that literacy, especially for young girls, remains a problem among the Roma.  Klara only went to school up to the eighth grade—-three years longer than her sister, who only went to the fifth grade.

I find this remarkable.  Despite her abbreviated formal education, Klara speaks with swift intellect.

Klara says the tribe fears sending girls to public school encourages them to leave for a different life.

“But I knew from an early age I wanted more,” she tells me.

While we wait for the food to come out, I go outside to photograph her family.  Three generations run in and out of the house, speaking a language completely new to my ears. 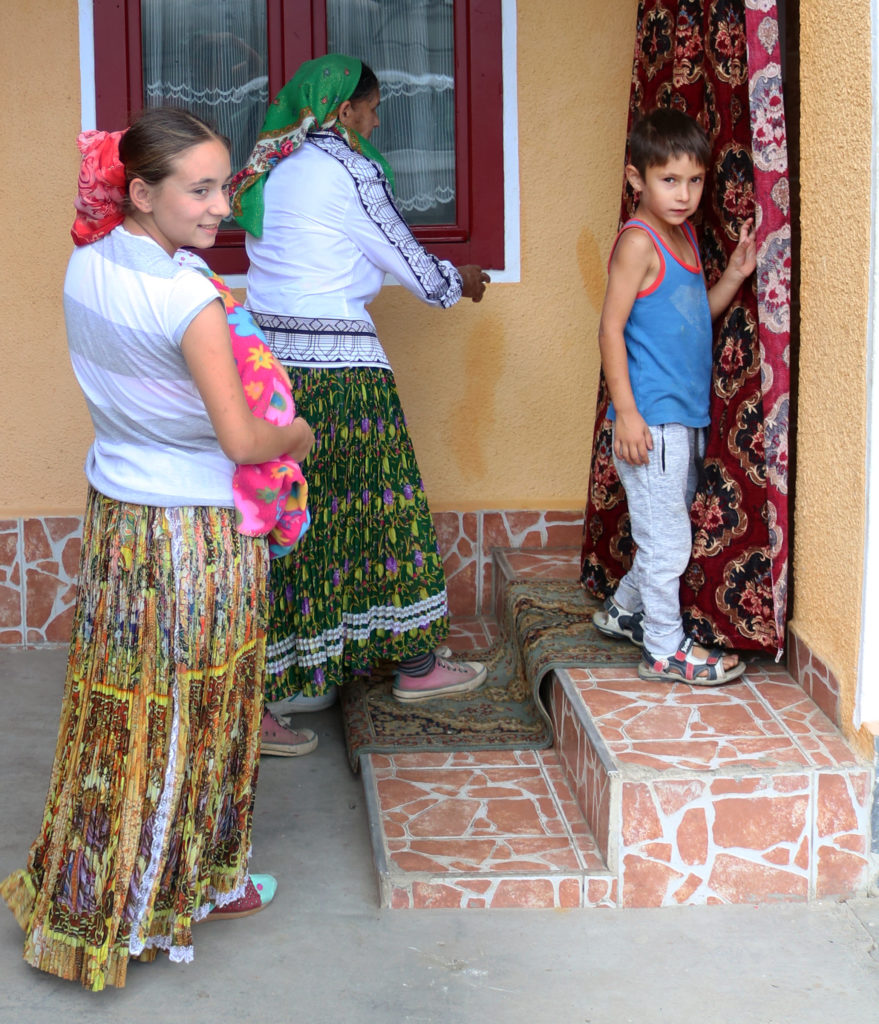 The Romani people use a number of distinct dialects descending from the Indo-Aryan family.  Their languages are so splintered, Klara says she sometimes doesn’t understand Romani people in tribes just a few dozen kilometers away.

I notice the stones on Klaras hands and wonder if they symbolize anything.  “Gypsy women wear all their jewelry.” She laughs.  “If you have nice things, what’s the point of not wearing them?”

This also apparently applies to dishes.  An elaborate collection of china stands in full display in the dining area.  Klara notices me looking at it.  “That’s part of my mother’s dowry.” 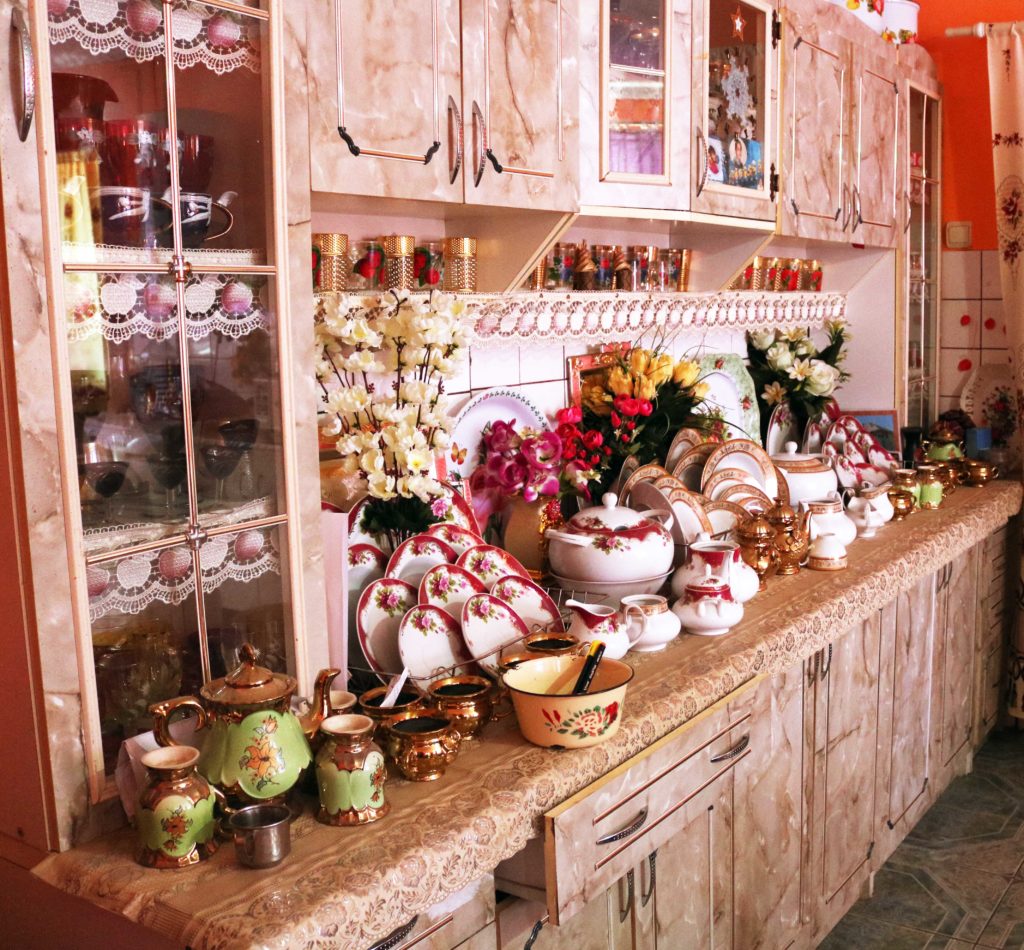 My husband and son join us in the dining room as the first course is served.

Among our dinner guests, Klara manages the conversation in four languages—Romanian, Hungarian, her tribal dialect and English—-which she learned from English language television.

She laughs when I tell her I couldn’t learn French even with books and teachers.

Across the table, a European couple sit.  One of them, a woman somewhere in her 30s, is Romanian.  She tells us that she discussed with her mother her visit here today.  A tense moment passes.  Klara asks the woman what her mother thought.

I ask Klara if she expected the woman’s mother to be concerned that her daughter came to visit the Romani people.

“There is a lot of prejudice about the gypsy people here,” the Romanian woman’s husband says quietly.

I ask Klara what it’s like to be gypsy among Romanians.  Her reply breaks my heart.  “When they see my dress, they don’t see my face.”

I think about Klara and her beautiful dresses and this lovely meal and I wonder how anyone could think unkind things about her.

It’s easy to admire Klara.  A successful local entrepreneur and pillar of her community, she strikes a brilliant balance.  Remaining both devoted to her tribal heritage, and yet in-touch with the world outside it, she inspires me to stay a little closer to my own beginnings.

As I pull out of the driveway, I remember Klara’s words and promise to live closer to them:

“They say you cannot have roots and fly at the same time.  But I am like a flying tree.” 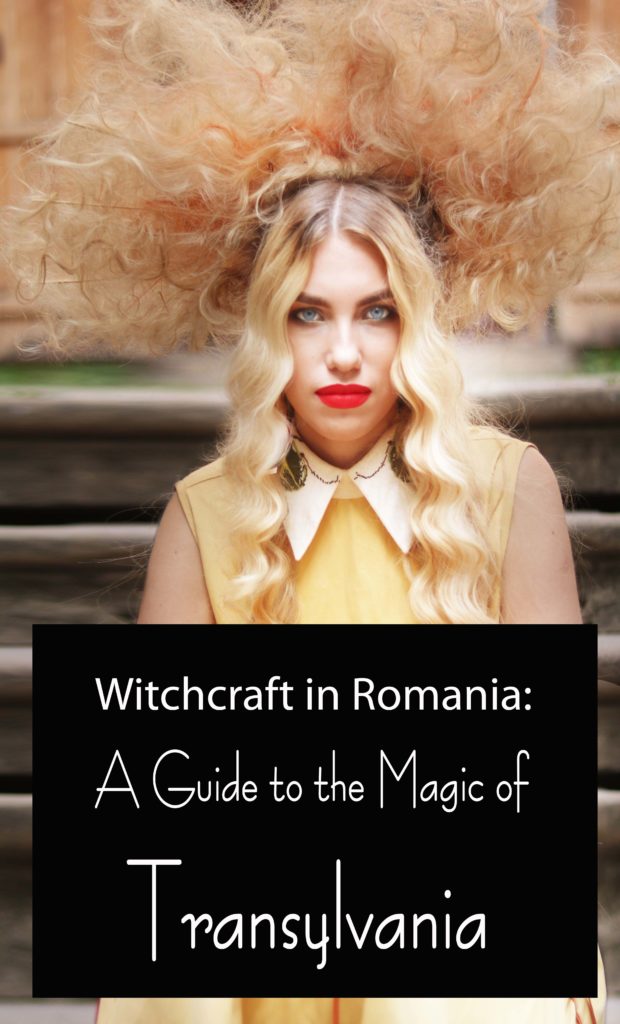