While younger millennials continue to flee traditional religious orders in droves, the pagan community trends towards exponential growth.  Why?  Consider these factors. 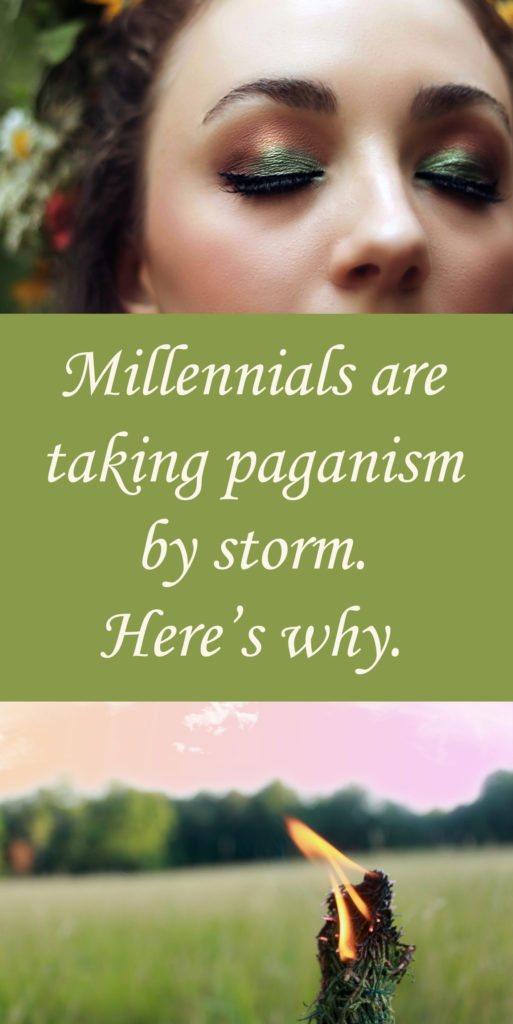 Obviously, the internet changed everything for everyone.  But it really revolutionized paganism.

In the ’90s, pop culture movies like The Craft and Practical Magic sparked a new interest in (and a lot of dumb stereotypes about) the occult and witchcraft in particular.

But while the internet still needed a few years to “get off the ground” and into mainstream American homes, the only resources available for most people interested in learning about paganism were:

Both these places required asking questions like:  “Do you have anything on the history of sticking pins in voodoo dolls?”

(Did you know this practice originated in Europe and has almost nothing to do with either Haitian or Louisiana voodoo?)

At the very least, both resources required you to go to the section labeled “occult,” “magick,” or “metaphysical studies” and then march to the counter to either buy them or check them out.

If you felt like a teenage boy trying to purchase condoms back then, you weren’t alone.

Mentors and experienced witches were even harder to find.

And covens?  They were all but urban legend.

Very few people considered coming out of the broom closet at a time when finding like-minded allies seemed impossible.

Fast forward a few years, and suddenly, information about paganism and witchcraft stretched out infinitely at the touch of a few keystrokes.

Even more amazing, pagans started to organize for political causes (like getting the US military to recognize Wicca as a religion) and to seek protections for their First Amendment right to freely practice.

With global warming activism, the alarming growth of the “plastic island” in the North Pacific and the high environmental cost of consumerism, American millennials feel an ever-growing sense of duty to the conservation of our planet..

The sacredness of nature in neopagan traditions spiritualizes this generation’s keen ecological awareness.

Millennials tend to appreciate the concept of harmonizing with nature in a radical way that their parents and grandparents simply didn’t.

In the later part of the 20th century, people thought “low-fat” equaled healthy and assumed anything the FDA stamped with approval was definitely safe for them and their families.

Before that, no one thought anything at all about what we now call “natural living,” because lifestyles that included locally purchased produce, cleaning your home without synthetic chemicals or walking more often as a form of transportation were an unavoidable matter of course.

But in the last decade, the modern consumer began to backlash against the mass-production “fake food” machine’s rampant use of artificial colors,  sugar substitutes, trans fat, and laboratory-created flavors..

As a result, the organic food industry, sale of natural personal care products and interest in “lowering your carbon footprint” all exploded.

Many millennials feel the natural living tenets of paganism align more logically with their lifestyles.

To a greater degree than even the previous two generations of feminists, many modern women find the idea of a male-dominated religious tradition objectionable, particularly when it is to the exclusion of female clergy.

Most forms of neopaganism recognize the feminine divine and I can’t think of a single current form that doesn’t welcome female clergy.

Practitioners are encouraged to honor the sacredness of child birth, destigmatize things like menstrual cycles and female sexuality, and respect the wisdom of older women as opposed to shaming them into invisibility.

When I attended college (nearly 20 years ago, good grief), I lived in a small university town in Eastern Kentucky.

I recall the tiniest presence of what we now call “neopagans” meeting quietly on a very Christian campus in a strictly conservative region and trying hard to avoid the attention of the more traditionally religious assemblies.

Then, in the early 2000s, The Pomegranate:  The International Journal of Pagan Studies, became fully peer-reviewed.

Particularly in Western Europe,”contemporary pagan studies” became (and continues to be) an emerging academic discipline.