Make some tea, have a seat and settle in for an epic pagan travel post on Savannah, Georgia, otherwise known as “The Most Haunted Town in America.”

I headed South to get the scoop on haunted houses for rent, to show you how to eat locally and to the point the off-beat way to the dreamlike, Spanish-moss-cloaked tombs that make Bonaventure cemetery poetically beautiful.

Please note:  This post may contain affiliate links.  I don’t actually know.  I just recommend things I like and let my affiliate links program do its thing automatically.

*The practice of Gullah witchcraft grew deep roots in Savannah.  If regional witchcraft interests you and the Gullah people sound unfamiliar, do some research!

*Spanish moss does not grow in Johnson Square.  No one knows why.  Botanists from around the world continue to study the phenomenon and propose theories, but failed as of yet to come up with an especially testable, satisfying answer.  Many locals believe the moss is sensitive to supernatural force.  Johnson Square thus sets the stage for some unique local mythology.

*Savannah is basically one giant graveyard.  Between epic family feuds, yellow fever outbreaks, fires and the Civil War, bodies piled up throughout 18th, 19th & 20th centuries.   Many were buried in makeshift, unmarked graves and then built over, making Savannah’s infamy for restless departed souls no wonder.

*The curious, real-life murder mystery of Midnight In the Garden of Good and Evil took place in Savannah, Georgia, where the locals know the book well and tour guides reference it often.   I recommend reading it before you go to enrich your perspective.

Or, if you must, see the movie.

With Gothic, Greek and Romanesque architecture erupting from every street corner, nearly everyone in Savannah can ably walk the streets here and point out a haunted old mansion or two.

So why not rent one?

I decided to draw the velvet curtains back on a couple such dwellings, giving you an inside peek at the phantasmagorical glory of a historical Savannah home.

After weeks of pouring through listings, I carefully curated two especially beautiful ones in two completely different neighborhoods and convinced the owners to let me stay as a guest.

Fortunately for everyone else, these properties are also available on Airbnb.

In the funky, youthful, hipster-friendly Starland District, I found The Haint. 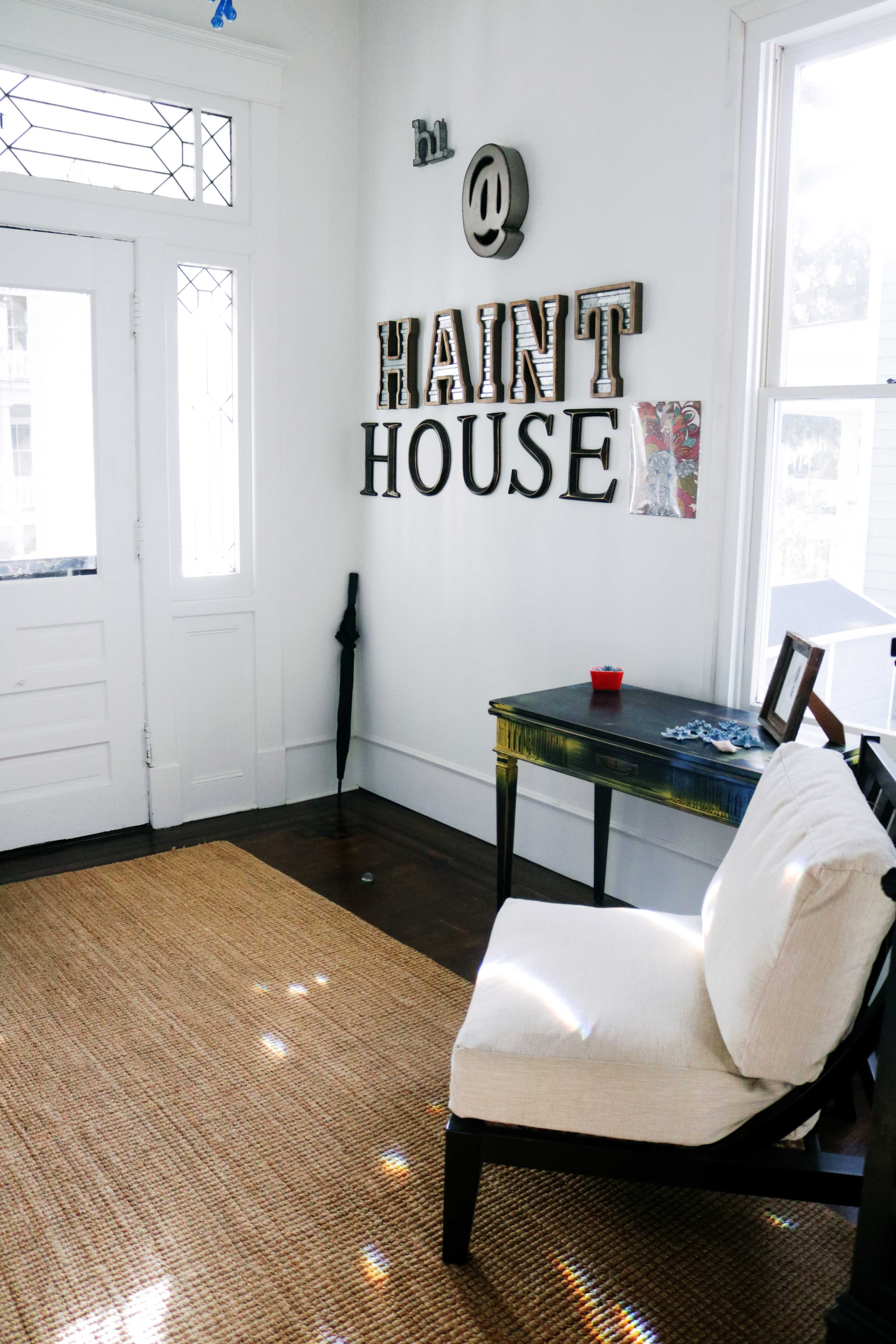 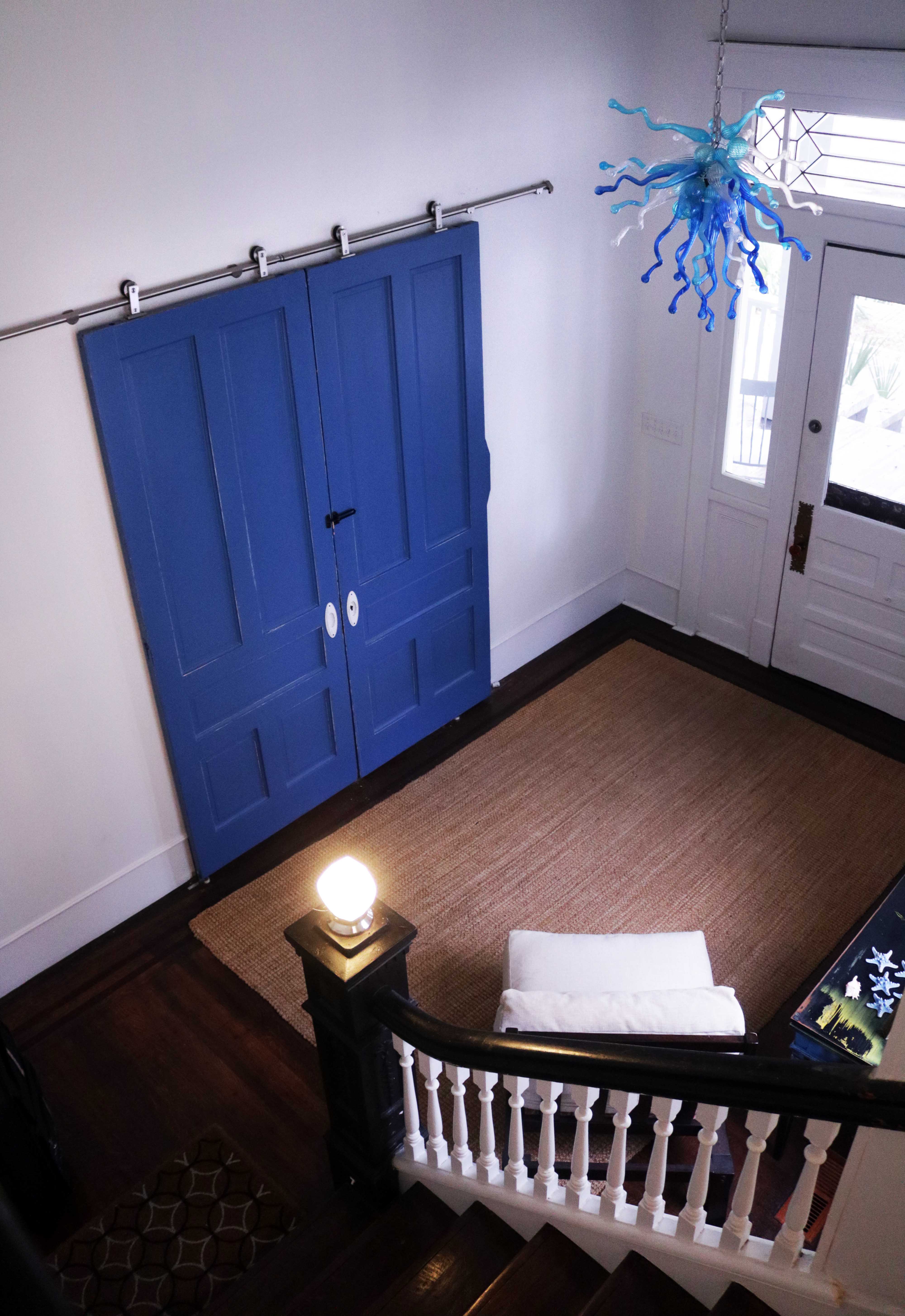 This Victorian-era home stands out alone on its brick lain streets as the only old construction still remaining.

The others of its time burned with a church that once stood behind it, but The Haint, protected by its carriage house, survived the fire and the many people that died in it.

Still scarred by smoke, the beams and stained glass contain a rich legend of ghostly footsteps parading the hallways.

The owner says a woman once went mad here and shut herself in after discovering a cheating lover.

Without a doubt, the house seems enchanted with some moonstruck spell.

The night I spent there, I walked barefoot down the hallway in an inexplicable fit of insomnia.  Drawing a floor-to-ceiling window open to find myself standing awestruck on the upper balcony, I marveled at the spectral grace of Spanish moss dripping from the streetlamps. 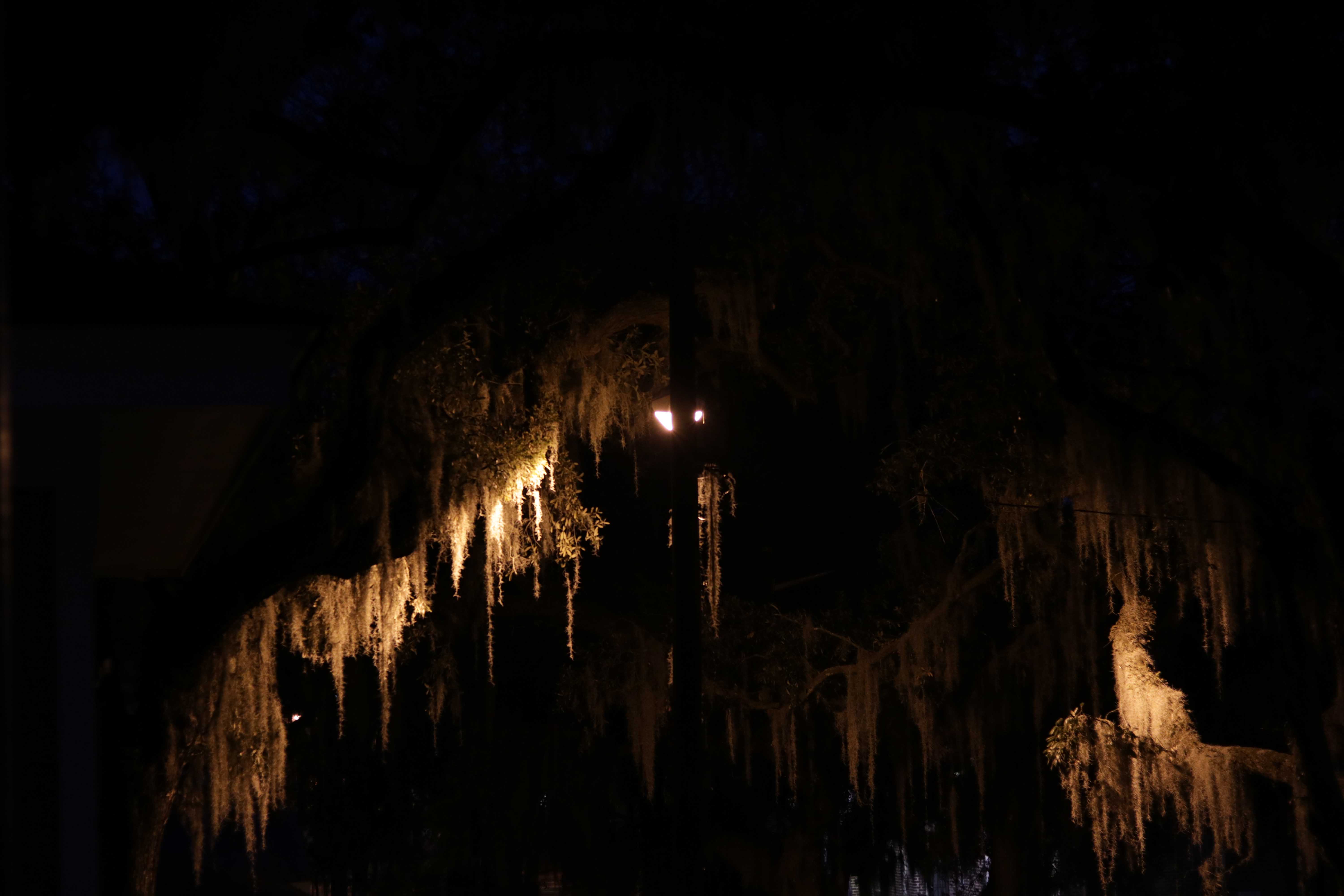 On the other side of town, I discovered The Pavilion nestled among the cafes and stately oaks of Liberty Street. 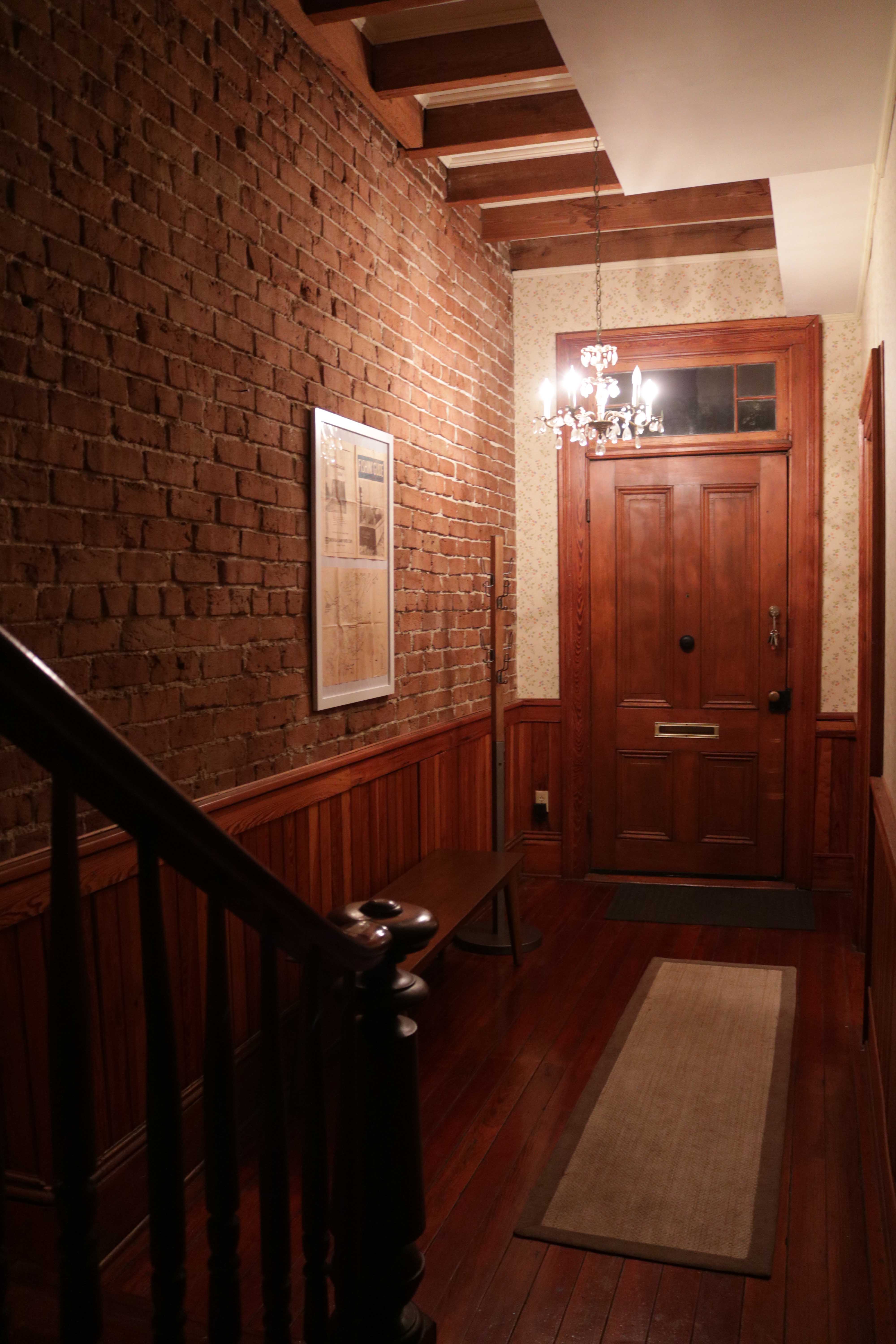 Thinking:  Surely, I am no guest here.

I turn this key to the great, heavy door, expecting to find a crotchety old banker on the other side, seated cross-legged with a fine cigar pressed between his teeth; demanding to know how I dare to trespass in his colonial urban palace.

I press my back against the door.  Running my hands over the masonry in reverence.

There is something darkly alluring here.

Across the street, I hear cathedral bells echo off stained glass and cobblestone, chasing away the silence that reflects from the high ceilings. I love the art nouveau on the wall.  It reminds me of a tarot deck I used to know. 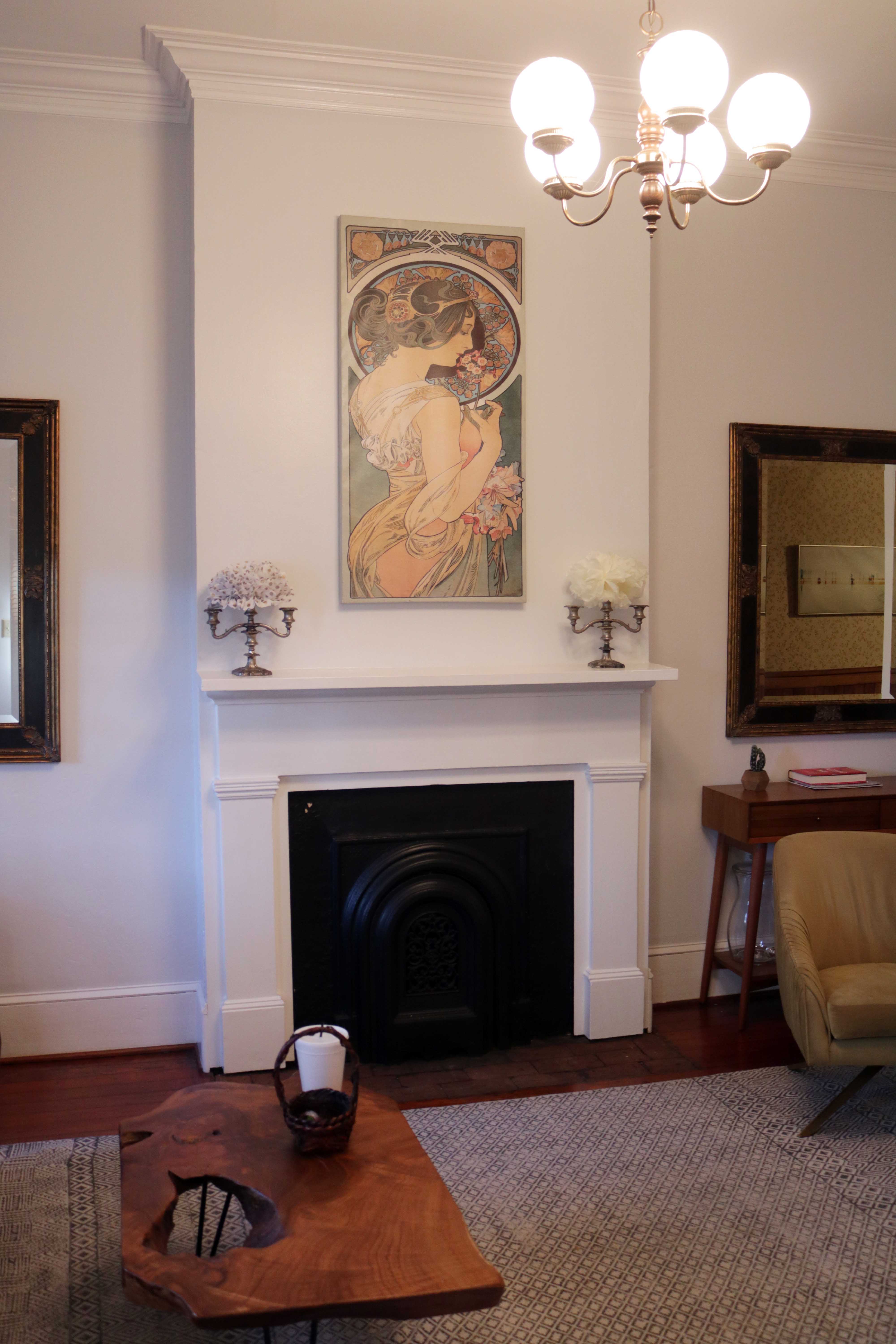 I felt unsteady alone in the vastness of it.

Fortunately, I scheduled my friend (and skilled photographer’s model) to pose for some fashion shots on this great, living set. 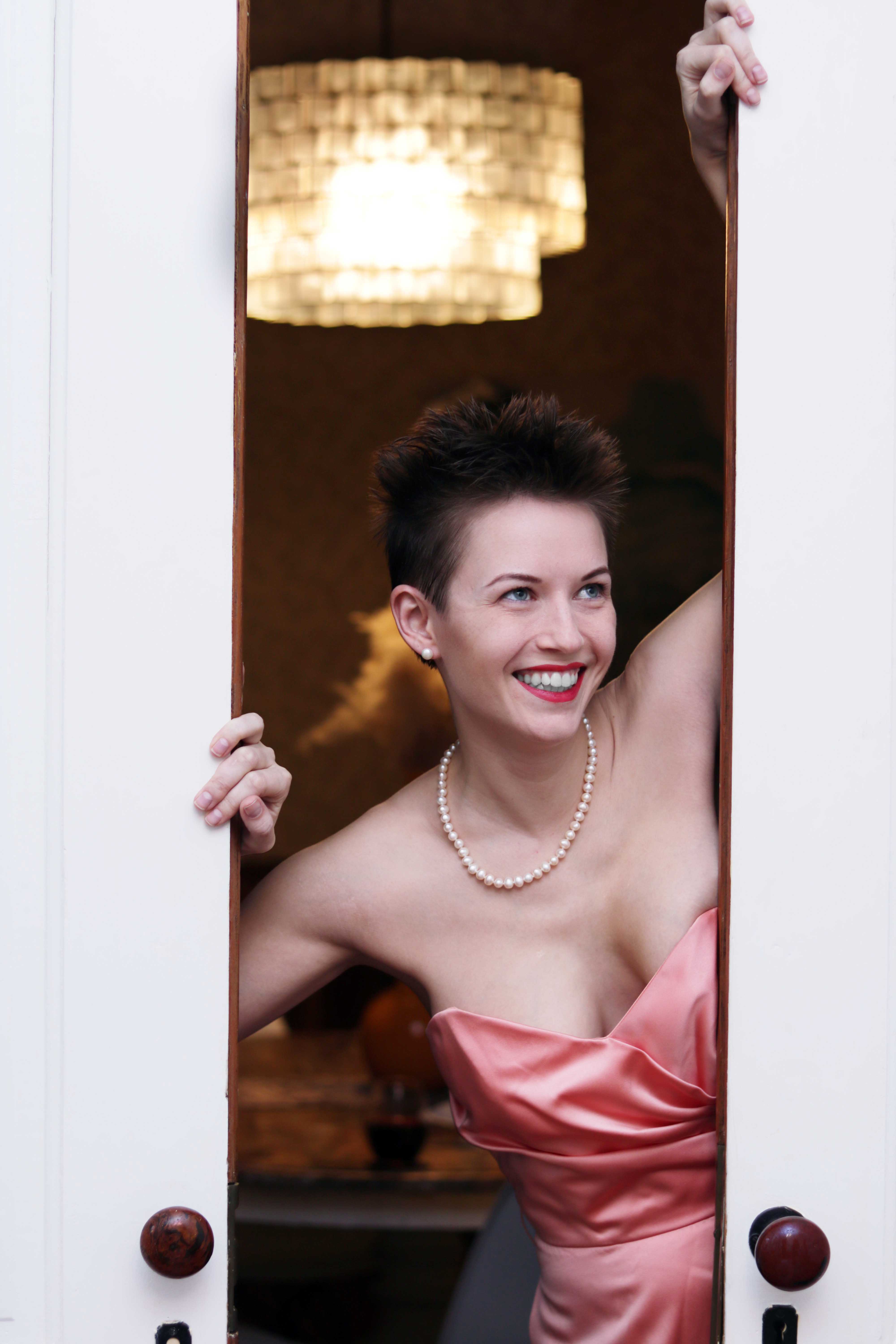 Check out Bonaventure Cemetery.  Peaking through the delicate swathes of Spanish moss, the crumbling sculptural tombs of this famous graveyard draw tens of thousands a year.  Go in the middle of the week during the off season when it’s quiet to experience this strange, gloomy beauty in its full glory. 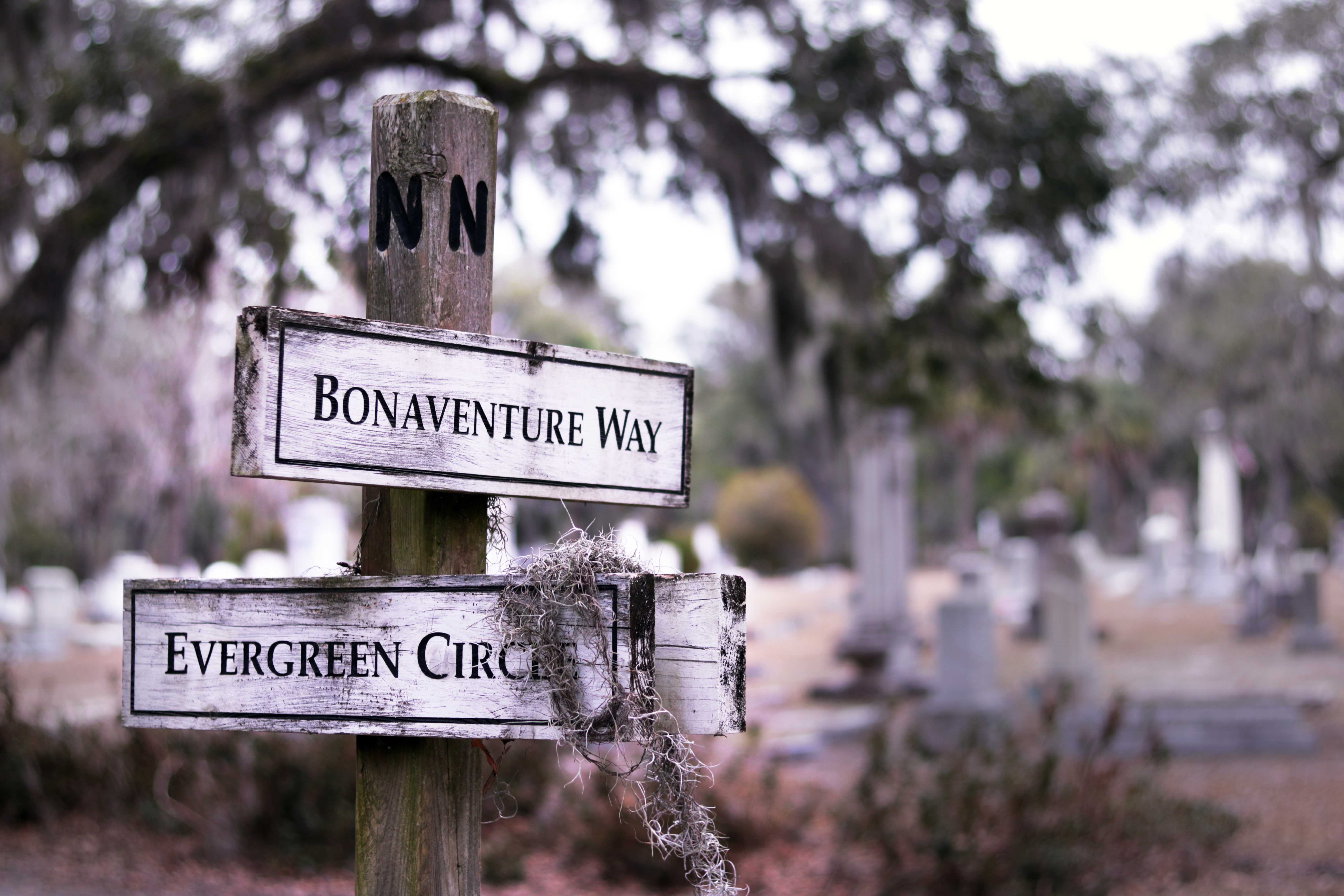 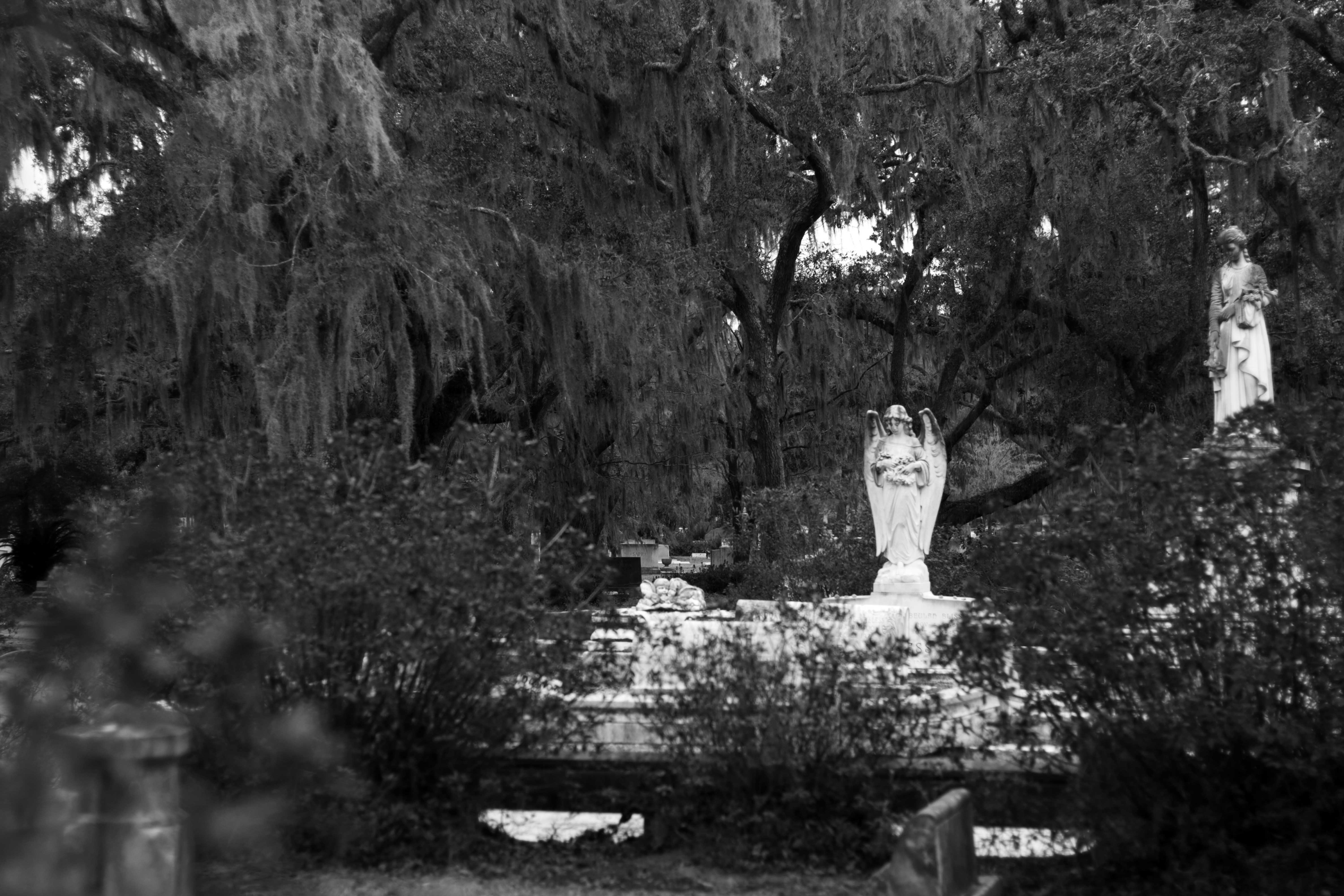 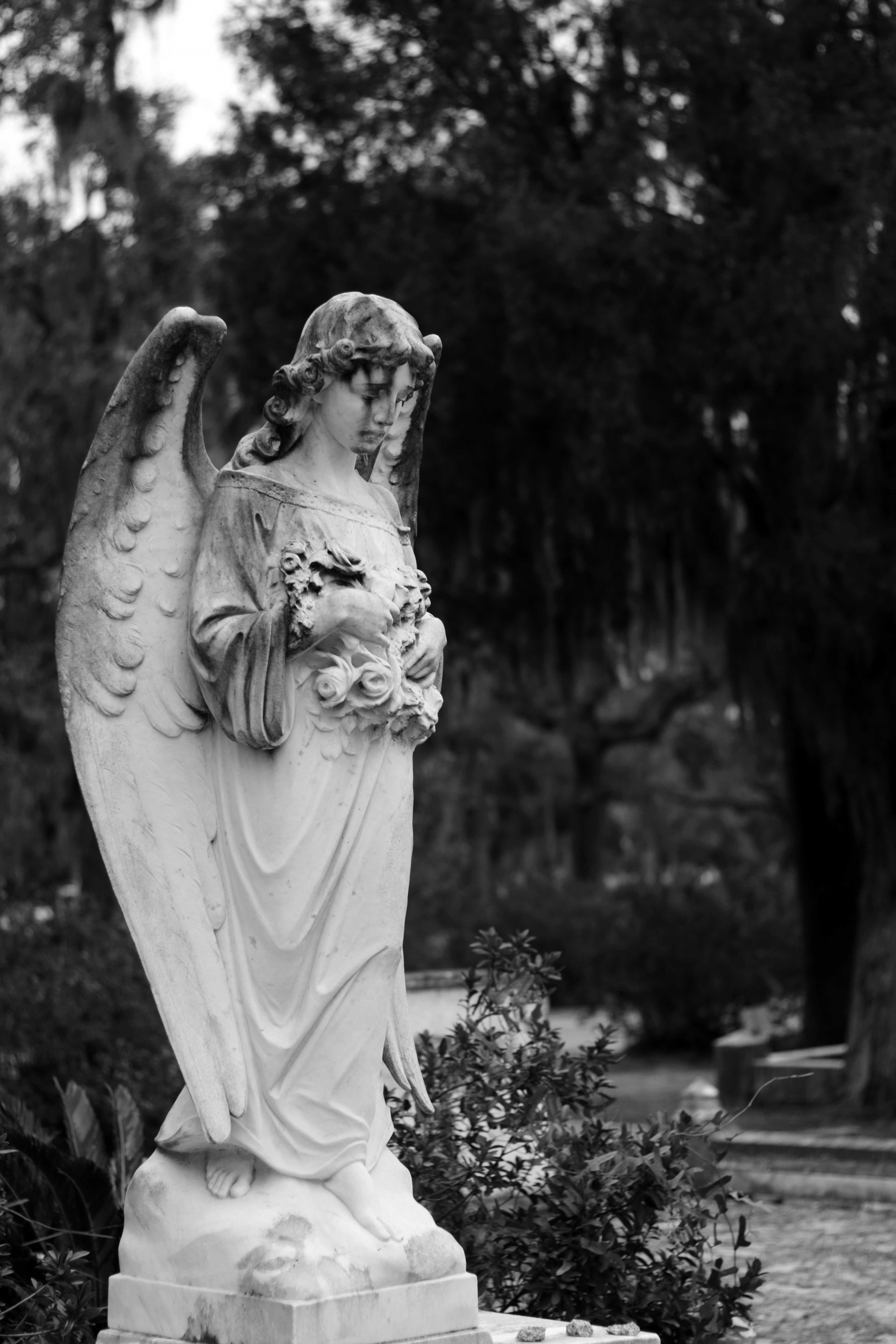 (Thanks to the folks at Hearse for letting me borrow your driver for this picture!)

Go on a ghost tour . . . in a hearse.   Want a fun way to orient yourself to the city?  Hearse Ghost Tours will send a deeply knowledagable guide driving a hearse to pick you up and give you a ride through Savannah’s richly folkloric haunted history. 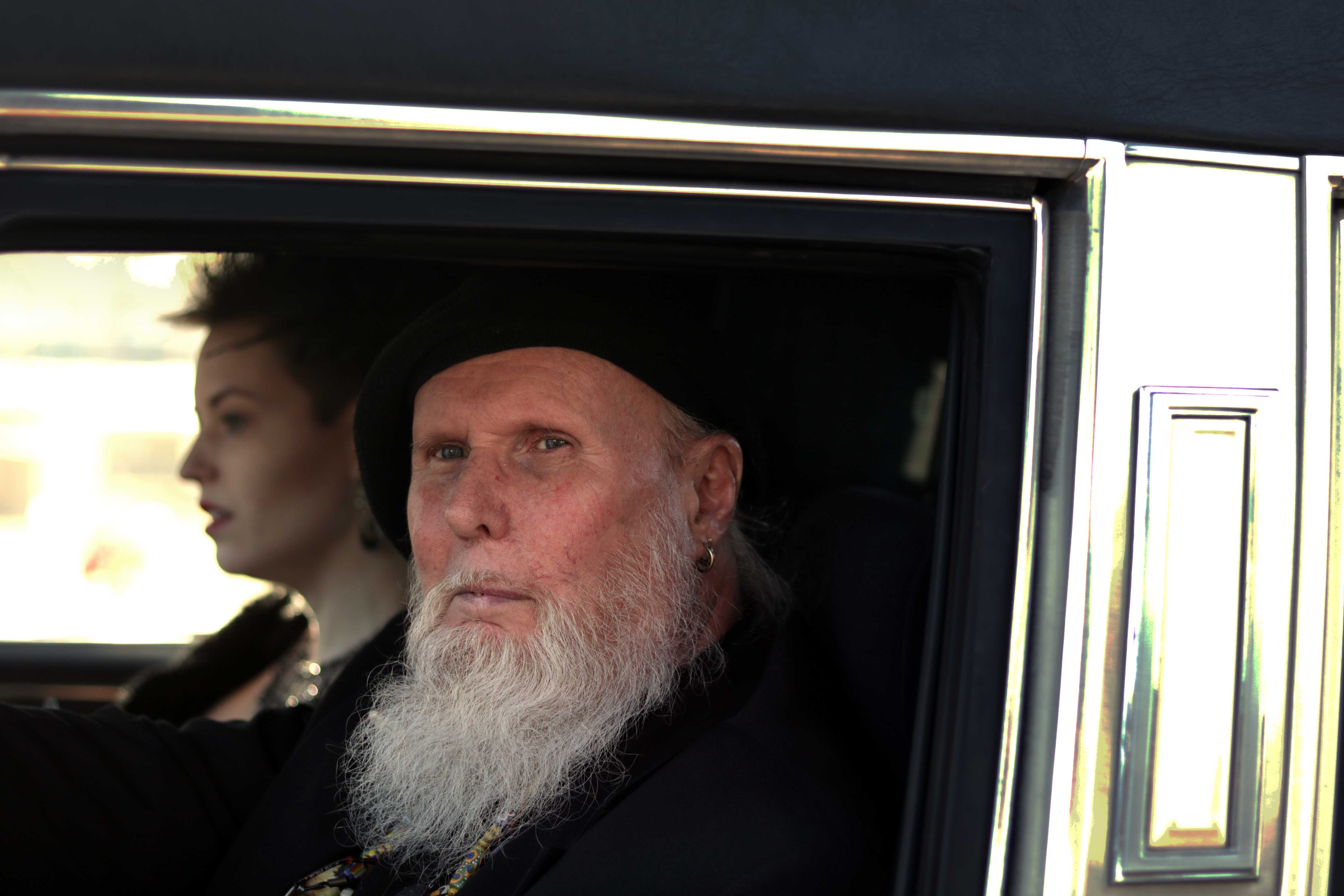 Take a walk through Johnson Square to observe a curious mystery.   Cascading from street signs, clogging the drainage systems and even entangling itself in power lines, Spanish moss grows almost everywhere in Savannah .  But it doesn’t grow in Johnson Square.  The phenomenon attracts curious scientists as well as supernatural explanations, including the curse of revolutionary war general named Nathanael Greene.

Whatever the explanation, you have to see it to believe it.  It’s really, really weird. Speaking of ghost stories, stop by some of the historical homes and buildings.  Many swing their doors open to the public.  Take a walk through the historic district and explore the restaurants, churches and small businesses.  Ask about the history of the building.  I found most people working in these places knew something of their cultural relevance—-and most of them had ghost stories. 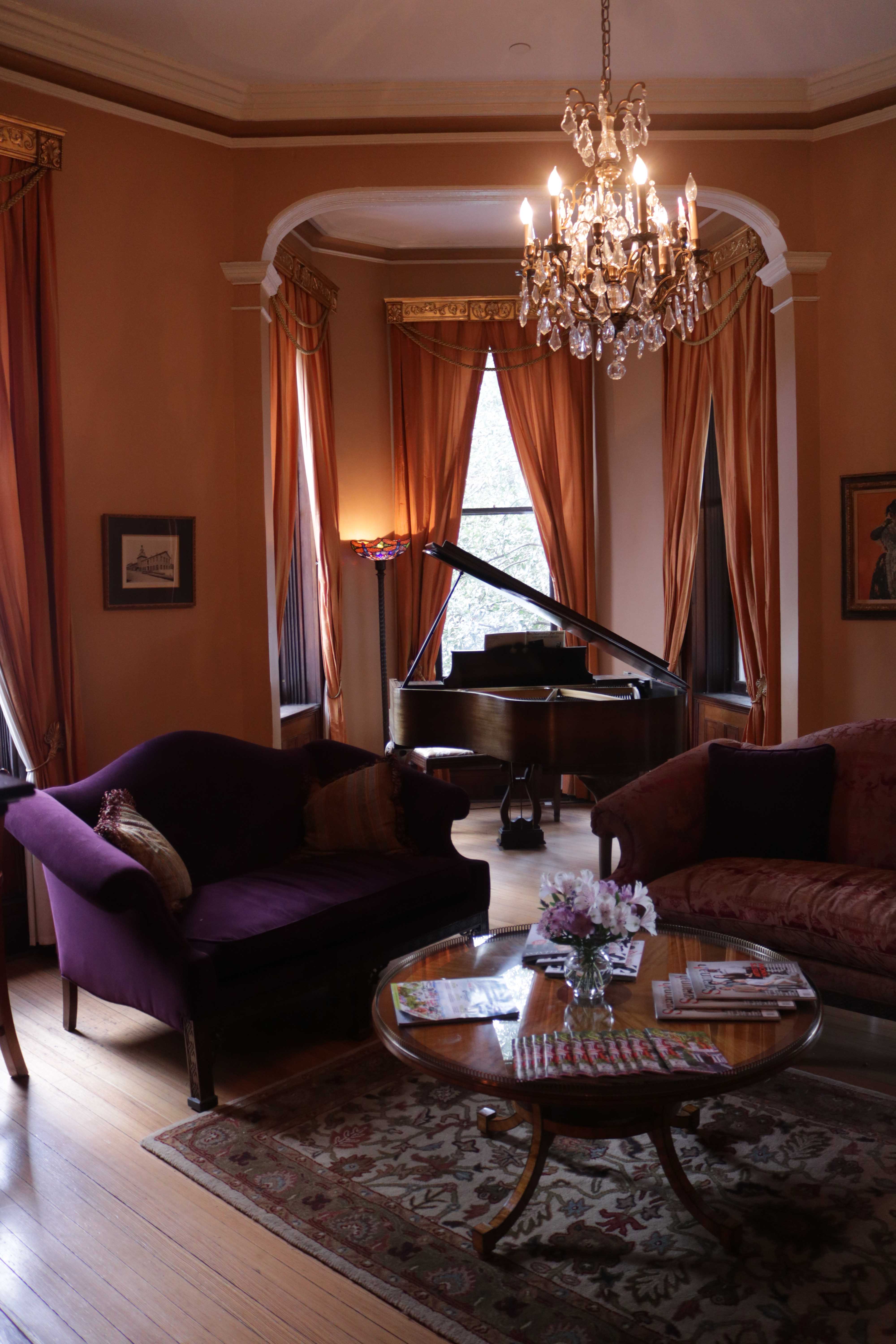 Pick up some gourmet honey for Litha . . . even if it’s 11 months away.  Did you know the purest honey almost never spoils?  Archeologists have discovered vessels of honey in ancient Egyptian tombs that remain well-preserved.

We pagans love us some honey.  It’s healing, natural and wholesome, and if you celebrate the Wheel of the Year, you probably include it in your Litha ritual.

Which is why when my host at The Haint suggested in her guidebook to stop by the Savannah Bee Company, I decided to stop by the next day and pick up some premium honey to put in the cupboard until Litha.

I was greeted by the super chill honey expert, Leah, who guided me through a tasting of some pretty exotic varieties. 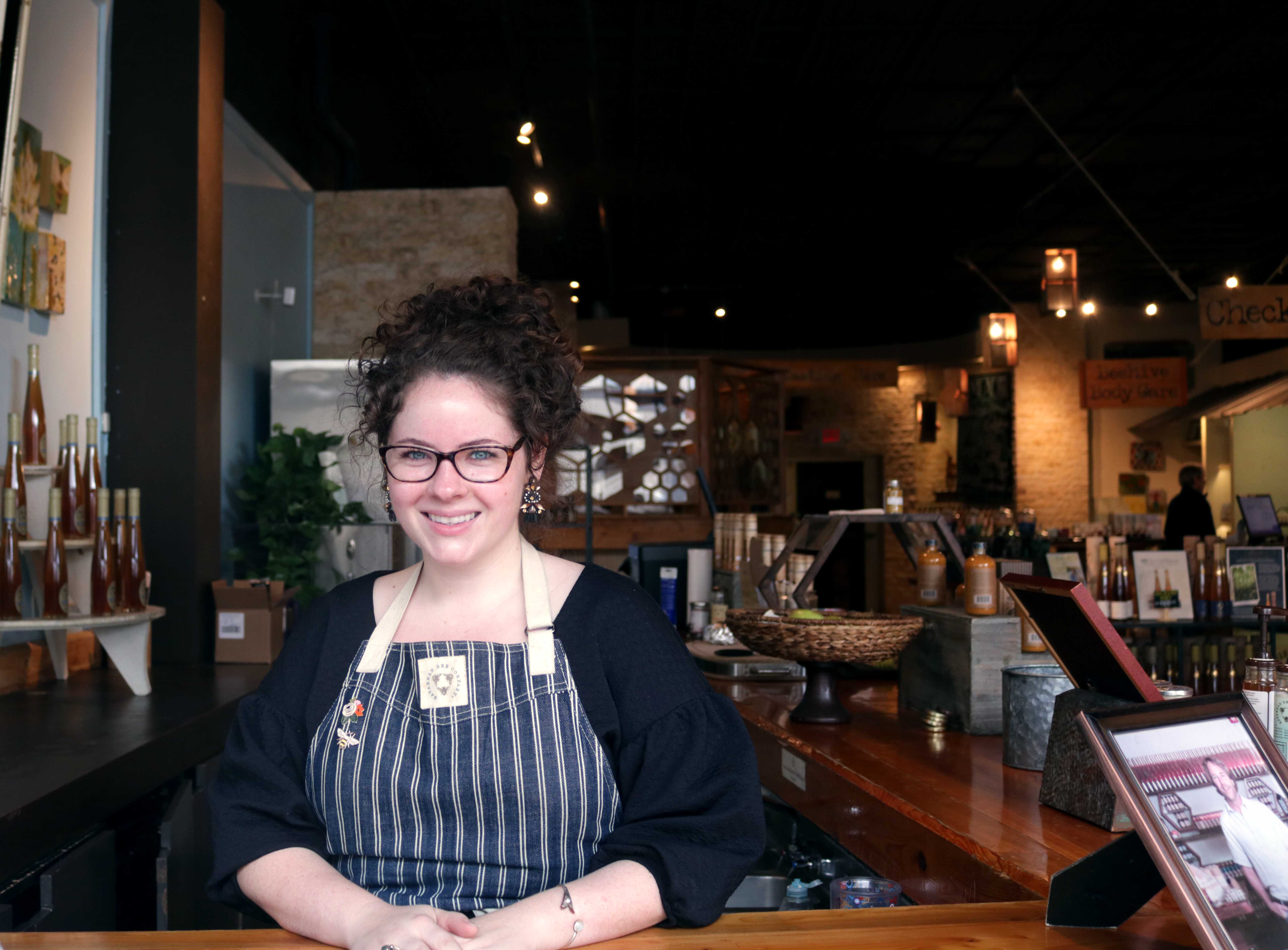 I decided on their wildflower honey.  Yum.  In my future, I see homemade biscuits drizzled in the nectar of the gods. 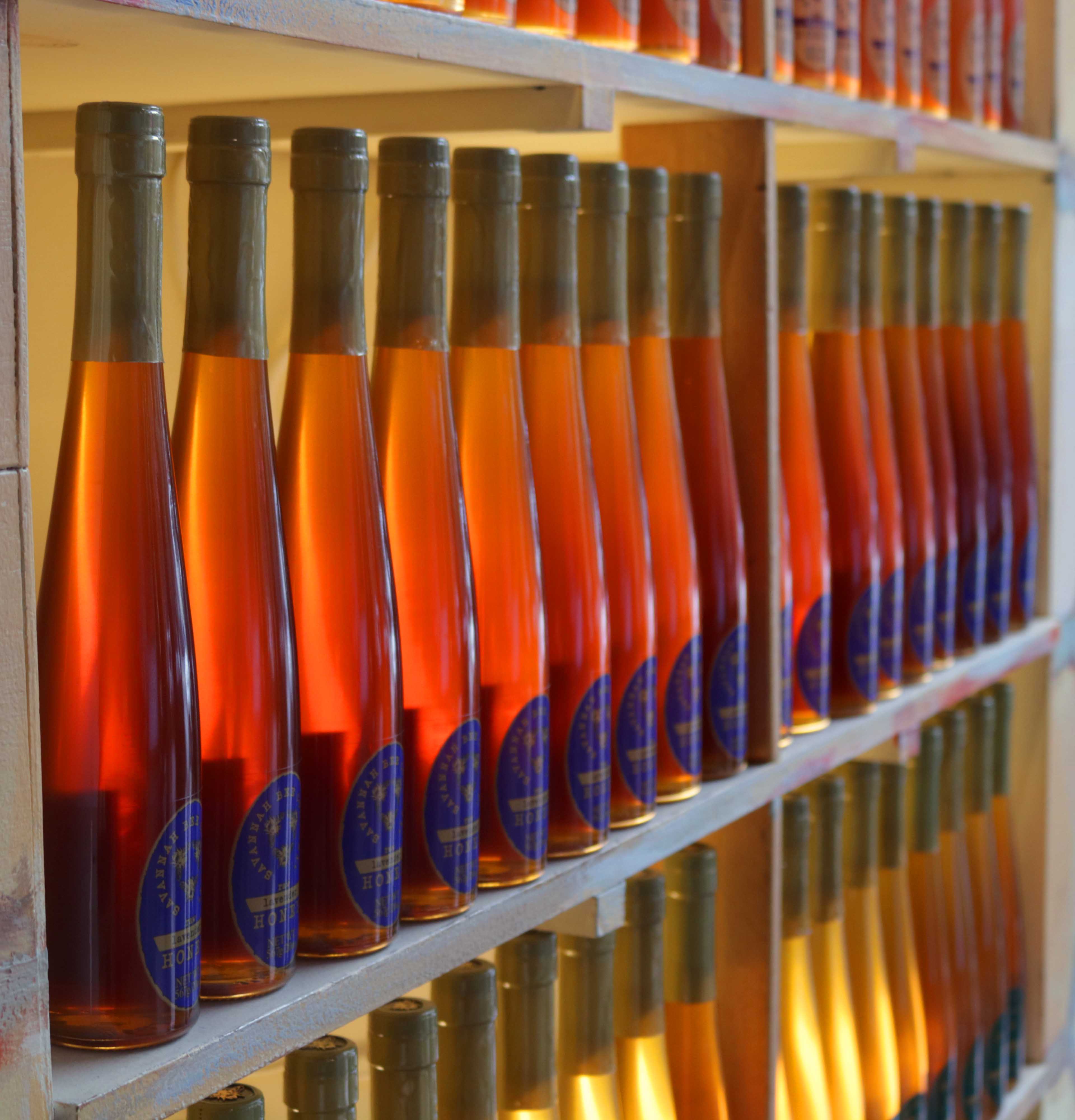 What to Eat & Drink

Personally, I avoid using Tripadvisor to find good eats, which tends to steer people towards established restaurants with long-standing reputations.  You’ll never find the diamond-in-the-rough with that approach.  Instead, I encourage you to ask around for recommendations from real locals.

All of the options below revealed themselves to me this way.

Mirabelle Cafe.   A chic little cafe in the historic district specializing in gourmet waffles.  I tried the bacon, tomato & cheese melt.   Yes, they put all that on a waffle.   It’s enough to skip lunch and go back for more the next day (I did!)

Foxy Loxy.  Found in the hip art district of the Starland neighborhood, this cafe is just the way I like it:  trendy but not too trendy.  Popular among the students at SCAD university, expect to be served by a barista with cryptic arm tattoos.

Foxy Loxy offers an eclectic menu of “brunch-y” small plates, baked goods and exotic caffeinated beverages that, in the grand tradition of independent coffee shops, I can’t yet properly pronounce.  Even in the chilly air, I found a seat on the upper veranda outside to try my spinach feta quiche & cortadito. 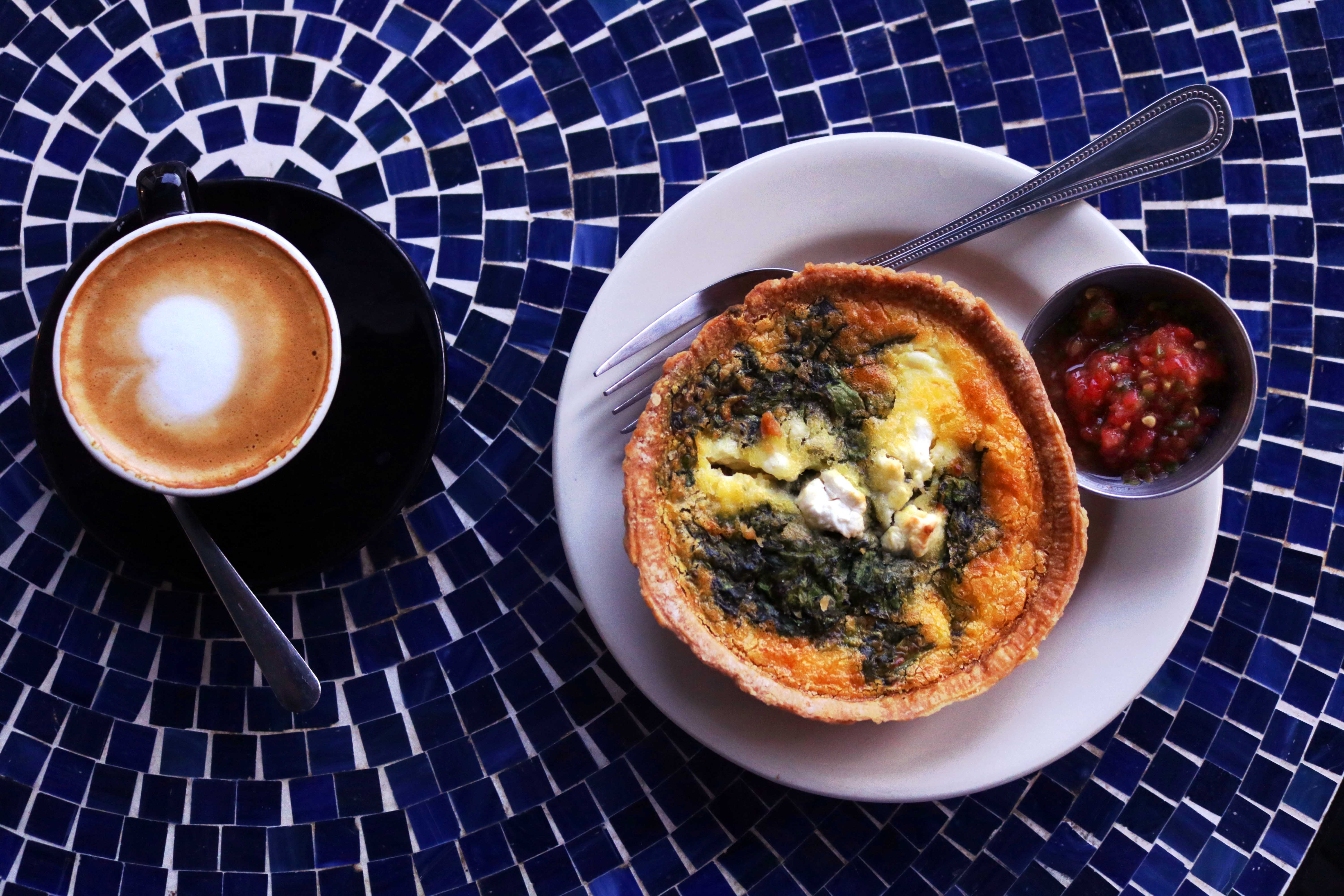 Sisters of the New South.  Recommended to me by a bartender at a bottle house, this down home, low-country, no-frills eatery makes a perfect stop for lunch on your way to Bonaventure Cemetery.   It’s local, it’s delicious and it’s seriously cheap.  I got two pieces of fried chicken and three generous sides plus cornbread for less than $7. Bull Street Taco.  Aptly named for its Bull Street location in the Starland District, this casual taco stand serves beer and cocktails, too.

Order off their “Tacos for a Cause” menu.  The owners donate a portion of the proceeds to charity.

I tried the “Pigs in Zen,” which the menu describes delectably as a jumbo chalupa topped with basil crema, chipotle mayo & greens.

They had me at bacon. I washed it down with this fancy agave cocktail.  Something called “Smoke & Fire.” 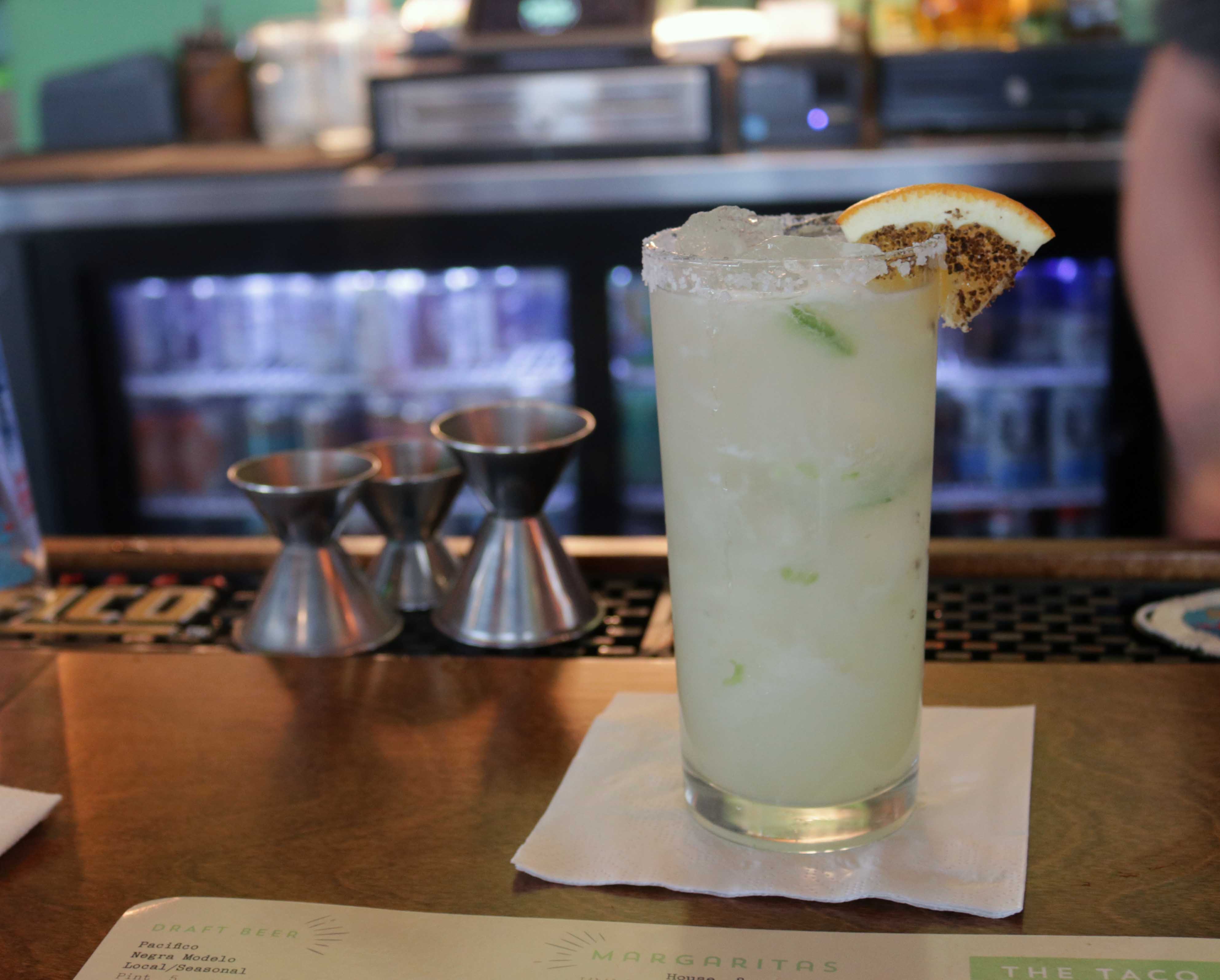 Unlike many attributed hauntings in Savannah, the history of violence and death in this property includes some pretty credible sources.   From yellow fever outbreaks to fires and bar fights, whether you believe in spirits or not, people definitely died here.

So the Moon River Brewery welcomes you to get drunk in their memory.  🙂

This place definitely gets a lot of tourist traffic, which I generally like to avoid.  But I tried it anyway because they give you beer in a to-go cup, which the city allows you to carry about outside so long as you remain in the perimeters of the Historic District.

A rustic, bare bones bottle house and relative newcomer on the craft beer scene in Savannah, White Whale Craft Ales offers a selection of craft beers.  I tried several, but I liked the “Orpheus the Ferryman Imported Stout” with coffee. 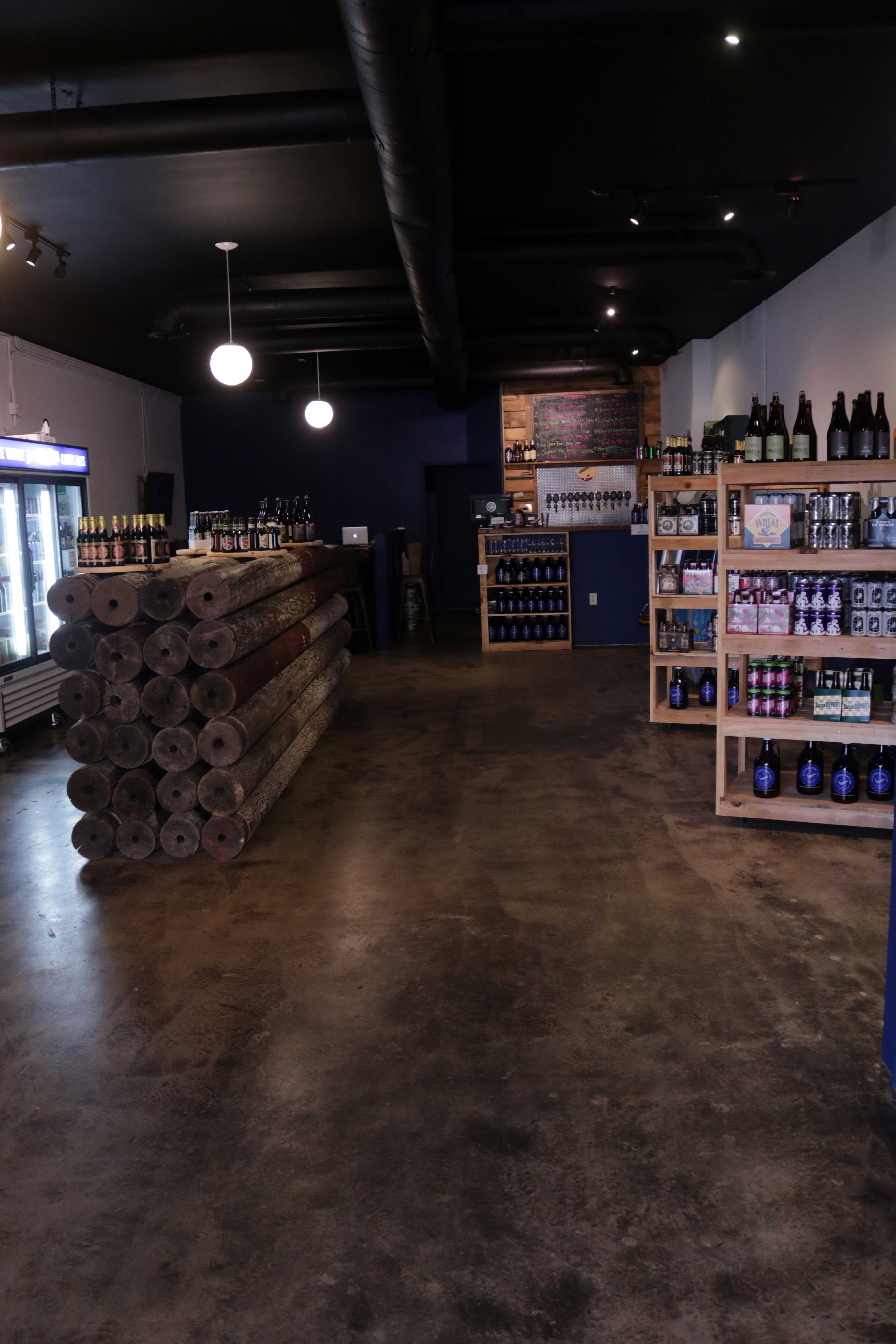 Like the Moon River Brewing Company, this spot makes many lists, so I decided to check it out to see if the food actually justified the hype.  Because the kitchen was undergoing some kind of renovation, I did not actually get to try anything, and I can’t say.  But I grabbed a glass of wine and asked the staff about the haunted history, which they happily regaled me with.

Or, try one of Savannah’s other haunted dinner spots.