Death doulas are changing the way we look at dying, grief and even the afterlife.

Hospice facilities around the country connect terminal patients and their families to death doulas for support throughout the dying process, and their numbers are rising.

What do we have to learn from people who work so closely near the veil between worlds?

Does this rise in popularity say something about our evolving understanding of consciousness?

Does working so near the veil between worlds increase or decrease one’s belief in the afterlife?

Are “paranormal” or unexplained spiritual experiences near death as common as many people think?

I took a journey into this unique world to deepen my own understanding of the single most universal part of life:  death.

What is a death doula?

When most people hear the term doula, they likely think of a childbirth doula.

Childbirth doulas provide emotional, spiritual and educational support to women and their partners through the pregnancy and labor/delivery process.

However, a growing number of doulas offer services for other types of major life transitions.

These very special people provide assistance for the dying.

They also support for the decedent’s family and loved ones through the grieving and death care process.

And although the term death doula only rose to prominence in mainstream culture in the early 2000s, the role of women in death extends almost as back as far as burial rites.

Death doulas vary widely in practice and belief.  But generally, they tend to promote a home-based dying process, the direct involvement of family members in the care and preparation of the body, and natural burial practices.

As a witch, the idea of a death doula piqued my interest because these people spend so much time in that intermediate space between life and death.

Riding the Veil Between Worlds

In modern witchcraft, we sometimes call this space the veil between worlds.

After my recent experience at the IANDS Near Death Experience Conference this past summer, I became increasingly interested in just how blurry the line between these worlds appears.

I wondered how living in that borderland effects one’s understanding of the big questions, like:

Why are we here?

What happens after death?

What happens at the moment of death?

Are there similarities between the birth process, and the death process?

How does witnessing death change one’s perception of life?

Perceptions of the Afterlife

The topic is an unlikely one for two total strangers on a Friday night.

I ask her the question that’s been on my mind the most during my research of death doulas:

“One thing that seems to be very taboo around the topic of death is this idea that some people have mystical experiences right around the hour of death.  What do you think about that?  Have you had your own?”

She’s not the only one with this conviction.  The majority of doulas I spoke with say they regularly encounter deathbed experiences that affirm a belief in the afterlife.

“My favorite story ever, or at least that gives me the most comfort,” Lashanna Williams, a death doula in Seattle, Washington, tells me.  “A woman who died briefly and was revived had a moment of, sort of looking down at herself.   And thinking, ‘How the hell am I going to fit back in that?'”

But not everyone is so sure.

Dr Annetta Mallon, the only atheist doula I encountered in my research, remains convinced that this life is the only one we get.  Interestingly, she says that frequently runs into resistance in her professional life regarding her secular approach.

But she insists that she fills a necessary void for people like her.

“Pastoral care teams in hospitals are highly resistant to having secular and atheist people on staff.  Now, if I’m in the hospital and I’m dying, language alone, the last fucking thing I want is someone coming in and talking to me about their imaginary friend and their book of magic, right?  I want someone who will sit with me and maybe have a bit of a rationalist discussion about my life.”

Still, there seems to be some universal consistency that working near and around the dying heightens your awareness of that transition in a spiritual way that’s difficult to untangle or make sense of.

Choosing End-of-Life Care as a profession.

When I ask Paige why she chose this path, she begins with telling me the story of her own close call.

“About 7 years ago, I was diagnosed with a terminal illness,”  Paige tells me.    “They said, “You could die any minute.'”

According to Paige, she survived her terminal diagnosis and was declared disease-free about 15 months later.

The outcome baffled her medical team.

She says no one knows why she overcame a seemingly insurmountable medical condition, but Paige credits her choice in profession to this life-changing brush with mortality.

“I didn’t have really a support system.  And at that moment, seven years ago, I had decided that I didn’t want anyone else to go through what I went through.”

At the time, Paige never heard the term death doula.  “It was a very windy road to get where I am today.”

She began informally by providing emotional support to her friends and family during the critical period before, during and after the dying process.

It wasn’t until later that she became certified and began to acquire formal credentials.

In the United States, the law in most jurisdictions does not require formal training to be a death doula.

The trade-off is that it’s also not a formal part of the medical care system, which means that most insurance doesn’t cover services like the ones offered by Paige and Lashanna.

This arrangement drastically limits access to those who can afford them, or to those few people who have access to doulas that work as volunteers.

But not everyone thinks regulation is a good idea.

“Now we have people who are wanting certifications, and pushing people who have already been doing the work out,” Lashanna tells me.  “There should be a separation between the medical and the doula.  That’s part of the magic of it.”

Thinking about becoming a death doula yourself?  Many people with an interest in earth-based spirituality find careers as doulas rewarding affirming to their naturalistic view of the world.

And if you’re in the United States, as of the date of this writing, the government requires no formal credentials.

Like many doulas, Paige completed formal training through the International End of Life Doula Association (INELDA).

But many doulas simply start in their communities by being there and available for people struggling with death.

Consider taking the next step by approaching hospice services in your area or offering to volunteer your assistance to an established doula.

Or, simply commit to staying open and available to grieving people, their loved ones and the process.

We all embark on this journey eventually.  Maybe it’s time to take a glance at the road map.

*Please note:  Some quotes were lightly edited for clarity.  Mostly, I took out the “ums” and the “uhhhs,” but I still note it because I’m neurotic about accuracy. 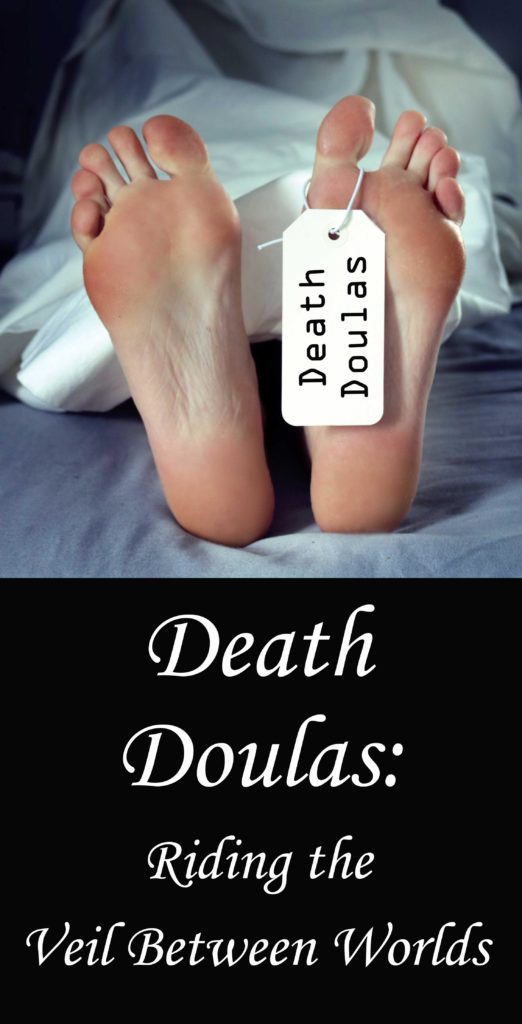