Did you draw The Devil from a deck of tarot cards?  Don’t panic!  Learn why this misunderstood card may be the best hand you’re ever dealt.

Much like the Death Card, the Devil stabs the novice querent with a shuddersome unease.

It immediately conjures the image of a goat-legged figure with horns and a pitchfork.

Practically wagging its tail at you, it seems to say, “Girl, you did wrong.”

As far as omens go, it doesn’t look good.

But not so fast!  This card brings with it revelation, which always precedes personal triumph.

First of all, let’s make one thing clear:  The Devil Card has nothing to do with devil worship.  It says nothing about the nature of tarot in that respect, anymore than the appearance of the devil in biblical literature implies Christians are devil worshipers.

The Devil in tarot represents the universal human experience of struggle in the face of overwhelming odds.

Think of this card as a reminder that overcoming addiction in any form first requires us to recognize it as a force of emotional bondage.

This entrapment of the soul is either self-inflicted, or inflicted by others.  But usually, it’s both.

Recognize first that some habits are fruitful, and others bear little-to-nothing.  The former moves us down the road of progress.  The latter inches us backwards.

Before gaining a deeper awareness of any tarot card, it helps to associate in your mind a few basic keywords, especially if you are still getting to know your tarot deck.

Try this exercise.  Pull out the Devil card from a (affiliate link —>) standard deck of tarot cards.

Sit in a comfortable position with a piece of paper and a pen.  Take a moment to look at the details of the card.  Notice what you pick up on.  Then, write down a few key words that come to mind.

This is what I got:

I know what you’re thinking.    None of that sounds especially positive.

The truth is, all cards come with their own complicated baggage.  The Lovers Card, for example, sounds like a nice card to get in a spread.

But really think about the love affairs of your life.

Have you ever really had a romance that didn’t have at least some . . . issues?

Why you shouldn’t panic.

So, why shouldn’t you panic if you draw the Devil card?

Because if you pay careful attention to its message, you understand that it’s really a precursor to positive life change.

This card often appears in a spread when we feel lost or lack clarity in our lives.  It’s a wake-up call that announces quite boldly:  You’re stuck in your ways!  It’s time to move on!

In a way, this is the most refreshing message we’ll ever get.

It’s a challenge.  It calls on us to put on our big girl pants and get something done.

But it’s also a kind of permission.  Most of the time, when we feel trapped in cycles, we want to change, but we suffer from narrowly focused tunnel vision.  The Devil card asks us to step back, survey out patterns, and weed out the ones that no longer serve us or others.

So, what are you addicted to?  Chocolate?  Self-criticism?  Toxic lovers?

We’re all addicted to something.

And the truth is, once we overcome the enslavement of a destructive habit, we often find another one buried underneath it.

The Devil card reminds us that overcoming the chains of personal bondage is a lifelong process.

Not everything is what it appears.

There’s one more thing to take away from the Devil Card.

When something awakens an irrational fear in you, it’s best to stare it in the face.

If you once recoiled at the appearance of this card, remember that knowledge drives away ignorance.

Darkness is merely the absence of light. 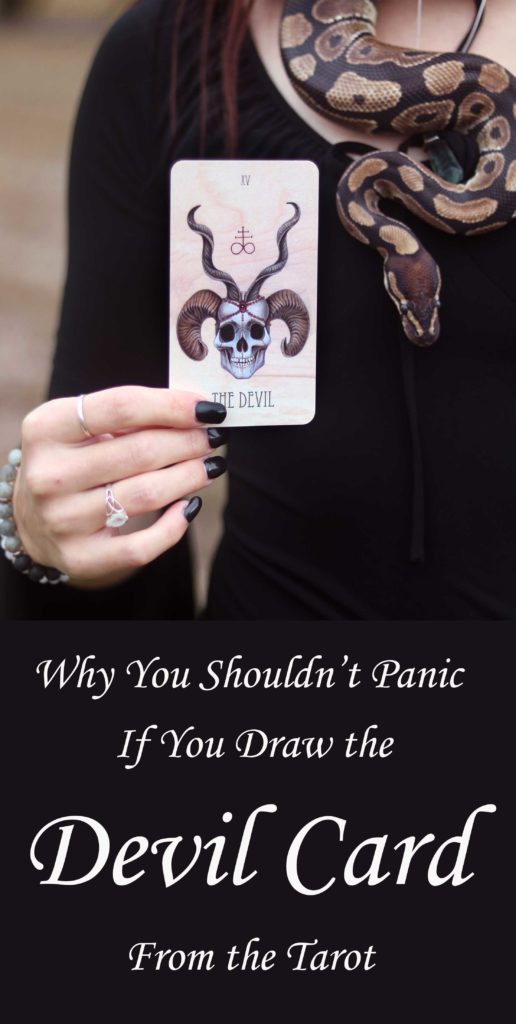