Goat yoga, the latest, cuddliest trend for whole living hipsters, is expected to attract thousands of new participants this summer.  I headed over to my local goat farm to find out what it is, how it works and if the experience lives up to the hype. 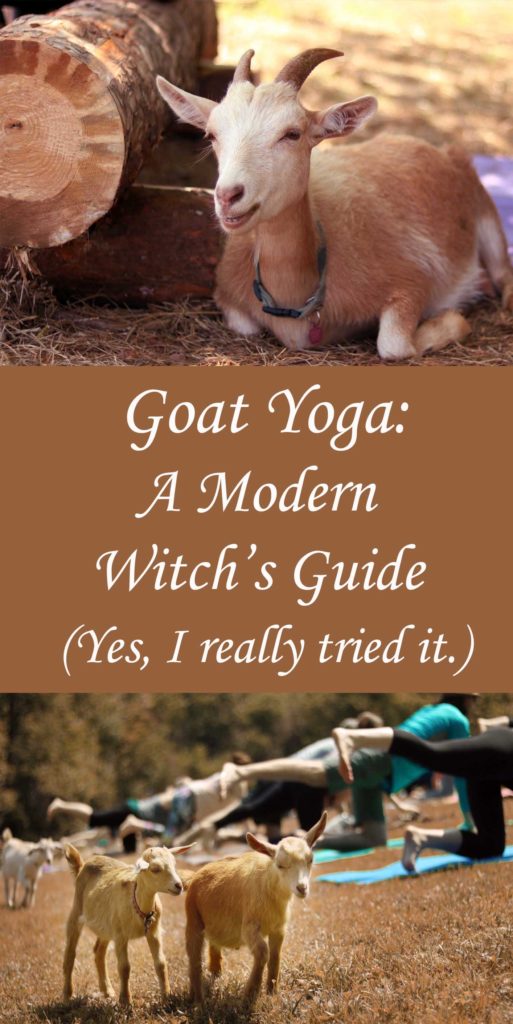 Think of it like a perfect marriage between a yoga class and a petting zoo.

The theory is that certain yoga positions (table top, for example) trigger the goat’s instinct to climb.  So the goats climb all over the yogis and everyone gets to cuddle with the friendly little four-legged creatures.

I know, I know.  It sounds ridiculous.

But so are unicycles and flaming cocktails.  And I love those things.

So I gave goat yoga a chance.

What does this have to do with paganism?

Not much.  I have to admit, this one is a stretch for a pagan blogger, but goats do have some special symbolism in many of the European pagan traditions, as well as a number of spiritual attributes.

Goats also symbolize the occult in general and played some key roles in pre-Christian European ritual.

I found it interesting that the goat community seems to treat goats with such reverence, and I appreciated as a pagan the chance to commune directly with them.

Obvious, the internet can tell you more about where to find a goat yoga class near you than I.

However, once you find one, I recommend you do a little responsible research about the farm hosting the event.  Make certain they have a clear record with respect to animal cruelty.  Never support a farm with a poor reputation for animal abuse or major licensing violations.

The farm I went to opened their barn doors over a decade ago. They have an excellent reputation in the community and advocate for cruelty-free, responsible farming practices.

I arrived early to take some photos and play with the goats.  Because goats. 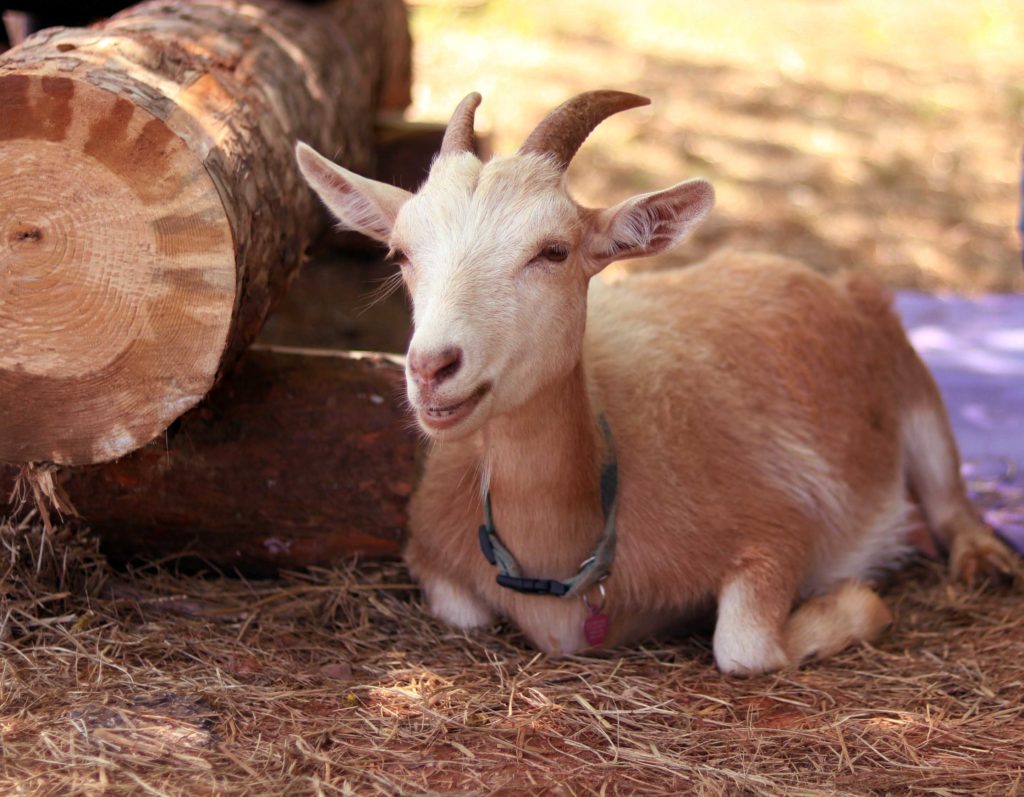 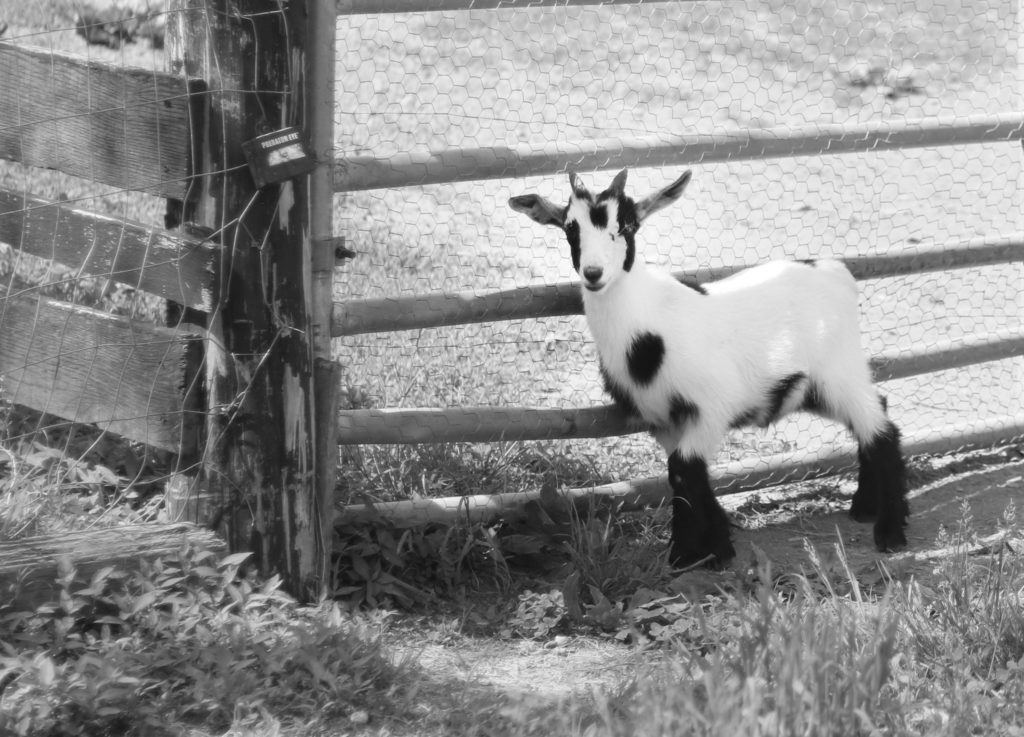 I thought I found mine until an alpaca walked over and pooped about four feet from my mat.

A woman wearing a microphone headset clear her throat and led us through a basic breathing exercise.

She needed this headset, because about 100 people ultimately showed up to attend.

I found the goat-to-person ratio a little lopsided.

The next part felt pretty familiar.  She called out a few basic yoga positions.  The goats milled around us nonchalantly. 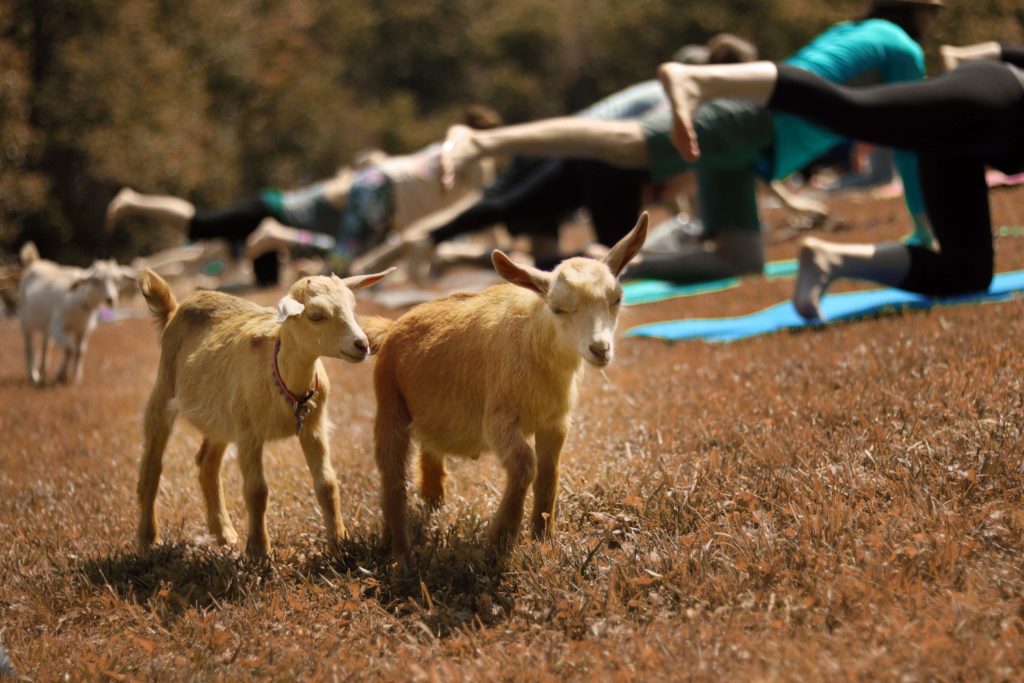 It was hot.  Really, really hot.  My hands started to slip on the mat.  I worried I might fall right into the poop.

I started to wonder how exactly I ended up here.  It went something like this:

Me: I’m not doing goat yoga.

Also Me: But it will be good for the blog!

Me: No. No, I have to draw the line somewhere.

Me: 45 minutes of smelling goat breath. That I will never get back.

Also Me: You’re doing goat yoga. This Saturday. It’s happening. Don’t fight it. They can sense your fear.

So, what’s the verdict?

Ultimately, I applaud the effort of responsible, family-run farms to come up with new, innovative income streams.

The people managing the property clearly cared about their animals, their guests enjoyed them and as far as monetizing livestock goes, the culture around, um, goat yoga, seems extremely respectful of the animals.

Goats are cute.  And yoga is an excellent, holistic approach to health and spiritual wellness.

But goats and yoga?  Well, let me put it to you this way.  Ancient gurus developed the practice of yoga in India over many generations.  India also has goats.

And yet, no one there ever actually thought to combine the two.

According to the Detroit Free Press, it took a hippie-chick-turned-goat farmer from Michigan to come up with this one.

On a property near the outskirts of Portland, Oregon, where . . . things like this tend to happen.

I let you mull over that for a second.

Add this to your bucket list if you genuinely enjoy the company of animals, yoga, farm excursions, and/or an excuse to be outdoors.

Skip it if you have a low tolerance for the elements or get squeamish around the realities of livestock.

Especially if you’d rather not wash goat poop out of your yoga mat.