The following article is based on my experiences with various paranormal investigators, professional exorcists and spiritualists.

I chose not to include my personal beliefs on this matter, as they bear no relevance.

On that note, ghost hunters vary in their beliefs, from Catholics to atheists (I know, it seems like a contradiction—more on that later).  Many, many approaches from different belief systems, including those of non-believers, offer valid perspectives on the subject of ghosts, spirits and the strange phenomenon of haunted dwellings.

However, this article addresses broaching the subject of paranormal investigation and ghost hunting for the practicing witch. 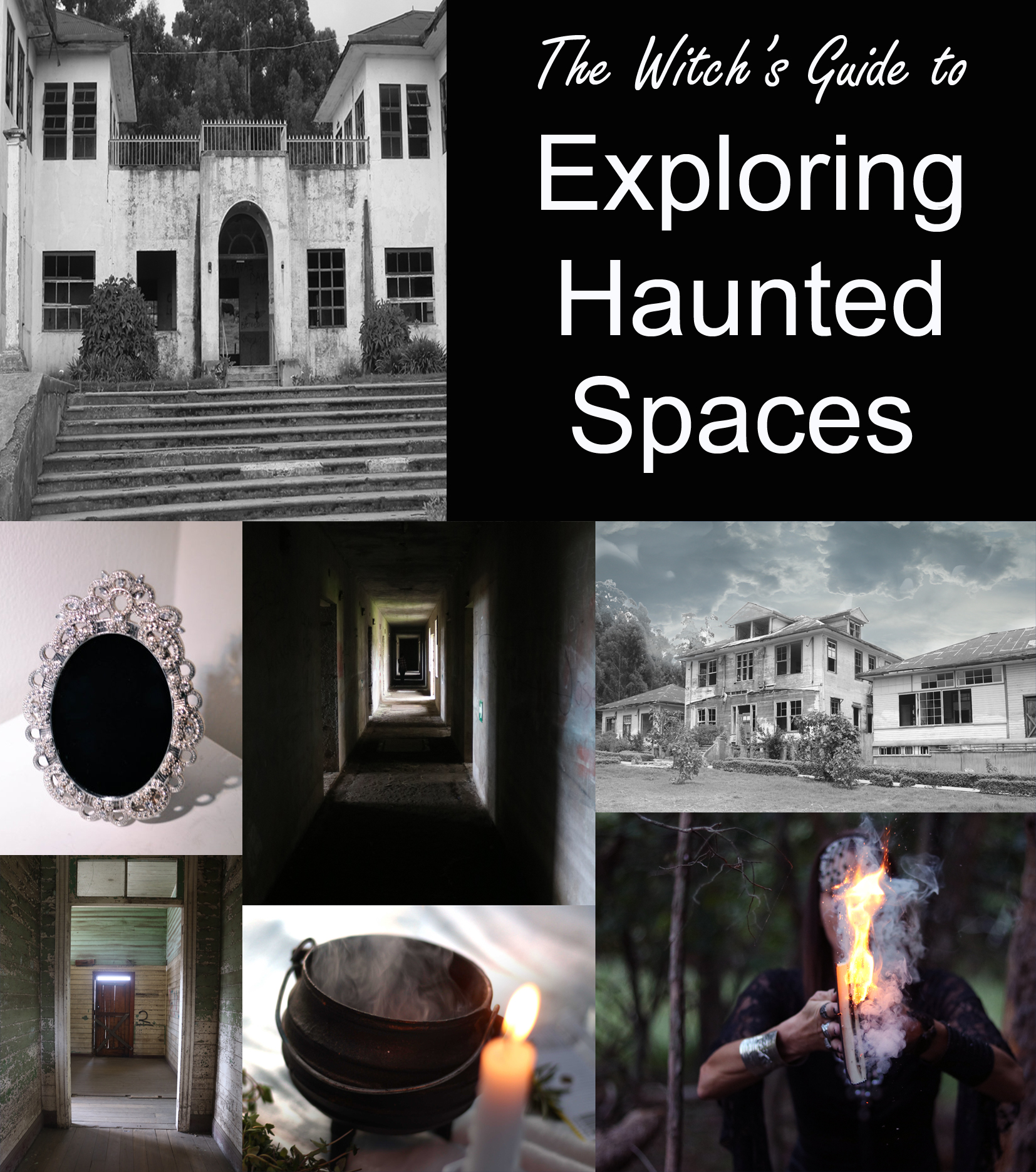 Step 1:  Decide if you even want to go there.

People feel drawn to the paranormal experience by an innate, powerful, totally human curiosity about that which they know not.

Sometimes, the recent loss of a loved one prompts them to search for answers about where the spirit “went.”

Sometimes, they just want to find out if making contact with an unseen spirit world is even possible.

Sometimes, they miscalculate just how possible it is and end up falling way, way over their heads down a phantasmagoric black hole that requires professional help to claw out of.

Don’t get me wrong.  Many people with paranormal experience describe a sense of wonder or peace when they connect with the spirit world—particularly those practitioners who experience it positively and feel they discovered a way to communicate with loved ones they believe continue to “live” on the other side.

But sometimes, paranormal experience broadsides the spirit, shaking the worldview in an irrevocable way.  Opening the door often proves easier than shutting it.  Many people end up wishing they never turned the knob.

As one sensitive once wisely put it to me:

“Once you know, you know.  And after you know, there’s no longer any way to not know. ”

In othet words, This isn’t a bell you can un-ring.

Whatever you decide, as a practicing witch, you will very likely, at some point, be approached for help by someone living the sometimes frightening or disturbing experience of residing within a dwelling they believe to be haunted.

So at the very least, know where you stand.

Step #2:  Recognize that not everyone has the luxury of choosing.

While experimentation-gone-awry triggers many a haunting, much of the time, the victim simply moved into the wrong house at the wrong time and/or carries the burden of extraordinary sensitivity.

When I first began to interview people living with what they described as “spirits” or “ghosts,” I frankly expected to find a lot of folks with psychotic or delusional mental health issues.

In fact, their very “ordinariness” often makes the haunted reluctant to come forward.  They almost always know they sound crazy.  Admitting one believes one lives among entities no one else sees or hears inherently invites the suspicion that one’s cognitive abilities lack a grounded foundation.  Often, they only agree to speak with paranormal investigators on the condition of anonymity—-particularly if they work in professions that necessarily require clean psychiatric records.

Sometimes, they live in a terrifying silence for months or even years before they work up the courage to tell their stories out loud.

Unable to turn to traditional authorities (like the police) or even seek out the guidance of their own religious leaders, the sufferer very often feels desperate, confused and unsure of how to proceed.

As members of the alternative spiritual community, I believe we owe a duty to those who stand at this spiritual crossroads.

Depending on where you live, there may be a shortcut to this step.  Search “your area + paranormal investigators” and see if an existing group pops up.

Contact them and offer to assist them on their next paranormal investigation.

Take the time to describe your background as a witch and what you offer in terms of your abilities.

However, if your area lacks a paranormal investigative team, start one!  Facebook and Meetup.com groups provide great opportunities for those looking for others interested in ghost hunting.  This also comes in handy when the time arrives to find subjects and locations.

The more web presence you have, the better.  Once you begin a group, people often approach you before you even get a chance to approach them.

During the recruiting process, be particular.   Screen, screen, screen.  While most people interested in ghost chasing live otherwise fairly typical, mainstream lifestyles (expect “normality” to surprise you again here—-paranormal investigators come from law-enforcement backgrounds, teaching positions, hair salons, and doggie daycares) every once in a while, you run into a less than desirable character.  Do not engage.

Whether you find a ready-made group to join or start one yourself, bear in mind that very few investigators go it alone, especially in the beginning.  Most experienced ghost chasers recommend starting with a group of 3 or 4 people with various skill sets for several reasons.

Bringing people with you helps with verification (“Did you hear that?”  “Chill out, man.  That was me.  I farted.”)

Just as importantly, choosing members for their individual abilities makes for a more organized and insightful experience.

For example, an energy healer, a photographer, a “tech guy” and a tarot reader all bring different things to the table.


If you have little tolerance for Christianity, monotheism, atheism or other belief systems, find another way to spend your time.  Paranormal investigation requires that you feel comfortable around people who don’t think like you do spiritually.  Not everyone who investigates a haunting believes in witchcraft.

In fact, they don’t all even believe in ghosts.

A word on atheist and “scientific” investigators:  yeah, they exist.  Some atheists believe “hauntings” are simply a natural phenomena not yet pinpointed or understood by the scientific method.  They usually acknowledge that ghost hunting isn’t a true science.  They’re right—it’s not.  But they also realize that science is still in its infancy, and there are many phenomena we can’t yet explain with it.  Personally, I think this perspective is very interesting.

Bottom line: make sure you can respectfully function as a practitioner around people who don’t believe what you do.

I work with another witch as part of a local paranormal team.  We always, always ask if it’s okay before we perform any ritual, including cleansing and healing rituals.  She comes from a Catholic background, so if the person in question happens to be Christian in faith, I let her conduct the prayer and blessing.

Perhaps you arrived on this page because you already know someone who believes he/she lives with what they describe as paranormal activity.

But if not, there are lots of places to look for it.

Believe it or not, your kids or your friends’ kids may surprise you with what they know about the local folklore.  Teenagers in particular feel drawn to places with a history of disturbed or unsettled entities (perhaps because their own lives feel so unsettled). You probably remember knowing of such a place as a teenager yourself.

Often, abandoned houses seem to carry the spiritual “fingerprints” of the lives lived there.

Don’t trespass.  It’s usually completely unnecessary, anyway.  Many owners will be happy to oblige you if you just ask.  They sometimes even delight in a request from a paranormal investigator and want to tell stories about the history of the place.

Like “Just so you know, the center beam upstairs is about to collapse, so . . . you probably shouldn’t walk on it.  Yeah.”

Some people refuse to use Ouiji boards (but oddly, see nothing wrong with Tarot.)

Spiritualists, on other hand, used Ouiji boards to communicate with the other side all the way back in the 1800s.  They continue to use them today without thinking anything about it.

But if Ouiji boards bother you, make sure everyone knows that ahead of time.

Or, if you feel compelled to cast a circle, smudge or otherwise preform any kind of protection ritual, make sure everyone knows you plan to.

Basically, let everyone decide what their personal limitations are before one of them shows up and starts chanting scripture backwards in Latin or spraying holy water all over creation.

Many approaches to evidence gathering may be taken.

Photographs:  In a pinch, even a smartphone will do.  But someone with a background in photography and a quality camera obviously makes the best option; particularly, a photographer skilled in advanced techniques for challenging, low light settings.  Not only will this make gathering quality photographs easier, a person with such experience also quickly spots common tricks of light (like lens flare or optical dust) that a less experienced photographer might mistake for orbs or other phenomena.

EVP (Electronic Voice Phenomena):  Again, people definitely sometimes use smartphones to gather audio recordings.  But analogue still offers the best option.  If you look into how exactly analogue recording works, it makes sense that this older technology actually responds more directly to vibrations in the air than digital.

Video.  Obviously, video recordings gather both audio and optical evidence.  But they also take a considerable amount of time to evaluate.

Sensitives, Psychics & Tarot Readers.  Hold them to a high standard.  Tell them nothing about the history of the place or what happened there.  Assume they know anyway if that information exists somewhere on the internet.  Take seriously only impressions that can be verified later by an independent, non-public source.  The most compelling impressions match up to verifiable events that the sensitive could not possibly have known during the reading.

Electromagnetic Field (EMF) Detectors:  I personally don’t really get into these.  Lots of people use them.  By all means, try it if that’s your thing.

Analysis requires patience.  It can take hours of focused concentration to pick up anything in a video recording, even if you watch the same clip 10 times—-and you must do it knowing you very well may have nothing.

But the pay-off returns 10-fold.  Even a 2-second EVP will rock your world if you’ve never heard one before.

In addition to examining your physical evidence, talk to your sensitives, psychics or tarot readers.  Make them write down their impressions and send it to you in an email so it’s time-stamped before you tell them anything about what you know for sure regarding the history of the place you investigated.

We know there’s something.

But beyond that, it’s anyone’s guess.

For some, it’s a matter of faith.

For others, there is a logical explanation that falls within the parameters of traditional scientific observation techniques, we just haven’t yet discovered it.

Personally, I think the best gift the paranormal experience offers is a more open mind about the world that exists beyond our five senses.